The fifth episode of Star Wars: Resistance is a fun ride with great character moments, awesome new species and settings and driving the plot forward. In a sentence: it’s Star Wars as you want it! Enjoy our semi-spoiler review.

What could go wrong?

Last week’s episode give us a deeper look at the base where Kazuda is stationed, saw some interesting interaction with his ‘crew’ or circle of friends and gave us a slightly better idea of what the flyin’ aces of this base are all about. 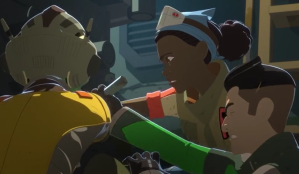 So in a way I was preparing for another episode that would rather be a side story instead of pushing the overall plot forward. I could not have been more wrong. Not only does this episode #5 Children of Tehar move the overarching plot on, it also introduces a number of new strands that without doubt are going to be wrapped up in the season’s finale.

The hero of this series, Kazuda Xioni, is a good bloke. He is not always the smartest, definitely not the most tech savy one, an outstanding pilot for sure and he has a good heart.

Isn’t that just the way we like our Star Wars heroes? Human and frail like you and me, but with the correct moral compass? So the episode basically starts off with Kaz causing damage … hey we’ve all been there, remember? His liability puts him in a situation where he needs cash. In addition, he can’t spend the entire season drinking in the cantina on Tam’s and Niku’s bills, now can he.

So in the cantina he hatches the plan to earn some credits by tracking down two missing kids, indeed … the children of Tehar. 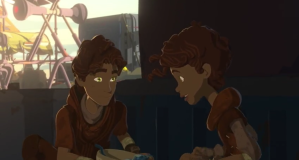 One thing that struck me at this moment while watching was how Star Wars: Resistance has learned from Star Wars: Rebels. In the latter series we spent much of the first season on Lothal and for some viewers that was a bit of a turn off. Not only did the rebels around Hera and Kanan seem to go nowhere, but the rest of the Star Wars universe was seemingly very far away. Not so in Star Wars: Resistance!

By placing the series on what is essentially a space-port, there is little need for Kaz to go somewhere as the rest of the Star Wars universe keeps coming to him. 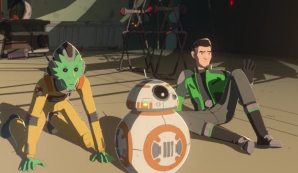 That is as much true of the First Order as we saw last week, as it is of the two children in this episode. Combine that with the introduction of new and interesting species, such as the Chelladi in this episode, and you are a long way towards making real Star Wars feel like it. I really enjoyed these ‘turtles’ living in the underground of the basis, fixing and knowing all, while at the same time having a humor and edginess that reminded me of the sloths in Zootopia.

A heart of gold

So Kaz quickly gets onto the trail of these two kids who are scavenging a living on the basis while attempting to avoid discovery.

We also soon find out that the true nature of the people who have put a price on their retrieval aren’t their parents, but the First Order. Kaz discovers his heart of gold and realizes he doesn’t value credits as much as he does feeling good about helping others. But what I loved most about that is that it is him witnessing Niku’s generosity that really makes him think. Niku reminds me in many ways of Jar Jar Binks. He is an intensely loyal character, clumsy and silly at times, but in the end he is a shining example of how we as humans could be … klutz or no klutz.

Of course the First Order shows up and Niku, Kaz and the kids make clever use of their newly found friends in order to escape them. So a chase scene later and some nice action-comedy we are basically back where we started off.

But Kaz has found a new side to himself, learning from his friends. But also he has picked up some truly interesting news … and a name is dropped for the first time in the series that we haven’t heard before. This gives Kaz something to report, for the first time, to his Resistance commanders. It is nice to see Kaz reawaken his role as a Resistance spy at the end of the episode.

Episode #5 of Star Wars: Resistance is a fun and entertaining episode. It introduces new things, both concerning the basis and its inhabitants, as well as concerning the First Order. But above all it gives us an opportunity to see Kaz learn from his friends. Something that Rebels occasionally struggled to show other than through Ezra telling us he learned from his friends. Here it occurs naturally and almost unnoticeably until you look back on the episode. 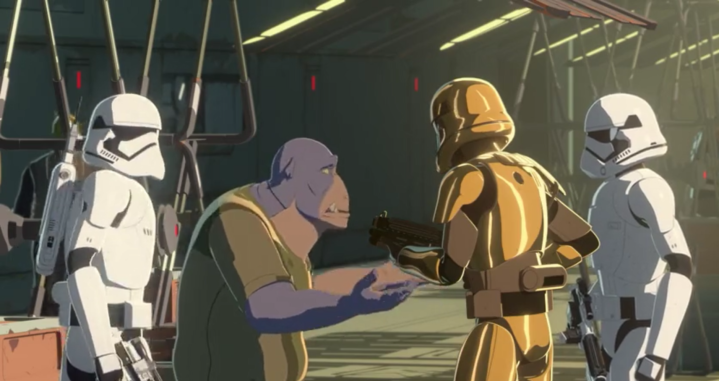 Five episodes into the first season I must say that I have grown fully used to the animation style. It is my impression that by sacrificing a little on detail of animation the series is able to afford more variation and I think that is a good choice in the trade-off between detail and variety

. Let’s face it folks: the level of detail that we got used to in the final three seasons of Star Wars: The Clone Wars is not something we will likely see again anytime soon. George Lucas was willing to invest his own money simply to push the technological envelope. Disney is a much tighter calculator between cost and margin but as a result they can produce more output … again a trade-off.

As we are slowly coming to the end of the first half-season, I think it is fair to say that Star Wars: Resistance has had a great start so far. I have not missed seeing a lightsabre or a Jedi at any moment in the series yet. I really like Kaz and his friends, I love how the Star Wars universe keeps coming into Kaz’s life. This is a nice series and if you haven’t been watching it till now I can only recommend: binge it to get up to speed till the next episode drops.