In the next few days we’ll produce a number of posts about the character arcs of key characters in Star Wars The Last Jedi. These will contains severe spoilers! We start off with Luke Skywalker! If you want to avoid spoilers, check our non-spoiler review.

All the way at the end of Episode VII we, following in Rey’s footsteps, find Luke Skywalker, after 32 years since we last saw him in Return of the Jedi. For a brief moment, that lasted two years in our experience as moviegoers, we are left to ponder what might be going on in Luke’s mind.

Three decades of stories in the Expanded Universe of ‘super-hero Luke’ preceded this moment. All The Force Awakens tells us is that Han has died pretty much the smuggler and scoundrel he was thirty years earlier, but for a little more wisdom, and Leia still being quite the tough fighter, tactician and strategist, but for a lot more sacrifice. And Luke?

To understand Luke’s character arc we must go back to his beginning, in Polis Massa, where Padme died shortly after giving birth to him and Leia. The last words his mother speaks about his father will be etched deeply into his soul, even though he grows up without realizing he has a father and without memory of his mother. But in those last few moments, before Padme’s heart gives way to the heartbreak that consumes her life, her words about Anakin cast a spell over Luke’s life without the little boy’s awareness.

Did Owen and Beru ever tell Luke that his grandmother Shmi was buried right next to the homestead? Or did Luke only hear about this so many years later after learning the full truth about his father? Or did he perhaps never know? Did Luke ever realise Ben Kenobi spent twenty years in the desert exile waiting for him to grow up? 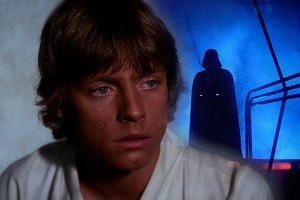 Ben never tells him on screen and Luke never asks about it. It is not so much a matter of script-gaps as it is a matter of Luke’s character. Luke’s eyes are always set solidly upon the horizon and so he easily misses what is right in front of him. Thus he lives his life on Tatooine, as a new hope, staring into the bright center of the Galaxy that seems so tantalizingly out of reach. Yoda watches from afar, as Luke watches, and Obi Wan watches over him.

When Luke travels to Dagobah for the next brief phase in his training, he has little clue as to what he seeks there.

He goes to Dagobah knowing he seeks Yoda but not knowing what or who Yoda is. Unsurprisingly Luke does not recognise him. It is Luke’s main flaw, his inability to see what is right in front of him. He is not unlike Rey in that respect.

Ever since Season 6 of The Clone Wars we however know about the devious game played with Luke on Dagobah. For there it was revealed that Yoda and R2D2 had been on Dagobah together, previously. Neither of them lifts the shroud of Luke’s hyperopia from him. Quite the opposite, they let him wander in the darkness of ignorance that surrounds him. Yoda can be a harsh master to Luke at times. Not unlike how Luke will be to Rey.

The training that Yoda puts Luke through later on Dagobah however pales as a challenge in comparison to the lessons of those first few hours of his quest for Yoda, 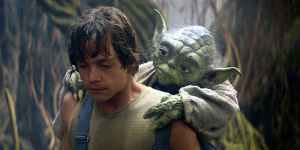 unable to recognise the master who was playing the clown in front of him. Luke won’t be afraid, he says, Yoda says he will be … in The Last Jedi we see that now Luke himself admits to his fears. But by the time Luke’s mind starts opening up to Yoda’s teachings on Dagobah, it has also started wandering off already … the the horizon, to his friends, to his parentage, away from the swamp and from Yoda. Luke runs off in a hurry, disrupting his training, with a vain hope to be able to save his friends. Not unlike Rey will run out on him.

Your origin resides in you

On Empire Strikes Back‘s Dagobah Luke is tested by the Dark Side in the cave, where Luke learns that what he fears is within him, a foreboding of not just his confrontation with Vader the Sith Lord, but above all with Vader his father. Yoda speaks of ‘your failure in the cave’ but Luke never speaks of it. But neither does Yoda tell Luke that it was Yoda himself who succumbed to despair in that same moor over two decades earlier. Our innermost trials are often left untold … as Rey also does not recount her search for her origin in the dark underneath Skywalker’s island.

When Luke returns to Dagobah to complete his training he has lost a hand. That amputation, in part, symbolizes he suffered an inability to fight or defeat his father. The Jedi abandon him here! For Yoda and Obi Wan cannot offer him anything else but a renewed call on him to face Darth Vader once more. Obi Wan dishes up a story about ‘points of view’ and ‘truths we cling to’ that echoes Palpatine’s earlier words to Anakin on Coruscant. The reality is that Luke is very much alone now. Yoda regrets Luke having faced the truth of Vader’s parentage, as Yoda thought not ready for it he was, as incomplete his training was. Though in a side sentence Yoda slips in that Vader’s reveals is ‘surprising’ … Yoda silently acknowledges this Luke Skywalker might know of something about Anakin that he and Obi Wan are overlooking.

In Return of the Jedi Luke faces Vader again, still with his juvenile good-hearted naiveté that he might turn his father. However when we honestly take into view what happens above the Forest Moon in Sidious’ Throne Room, there is no ‘Luke turning Anakin‘. That plan failed already down on the Moon itself during Luke’s arrest. When Luke faces Vader again, he above all faces himself again. In the fight he bests Vader but shrieks back from the abys of killing his father. Instead, for the first time in Luke’s arc, he makes a choice in the here and now. Luke’s moral compass has remained intact and now, when it matters most, he follows his own course breaking a cycle.

It is striking how Luke verbalises and acts out that choice. Luke commits to his heritage before Anakin turns back. Not only by not killing his father, but by turning to the Emperor and by throwing away his lightsabre and acknowledging himself as “a Jedi, like my father before me”.

It is Anakin who, a little later, recognises his final chance to restore some of the life he could have led. Lit in the crystal clarity of blue Anakin faces that one last possibility to ‘take of that mask’ and to re-assume his former self with all the flaws and shortcomings. Anakin rescues Luke’s life by finally giving up what remains of his own, by giving up on his obsession to ‘rule his fate’.

It is almost inconceivable that this would not have left Luke deeply split emotionally. His father after all still was a villain and had perpetrated many a crime. Yet, not only did he commit to his lineage anyway, but now he even thanked his survival to this last spark of light in his father that re-awoke upon his example of acceptance.

The Star Wars The Last Jedi this story is retold in a slightly different form. This time the darkness that Luke recognises is not his father Anakin Skywalker, but his nephew Ben Solo. 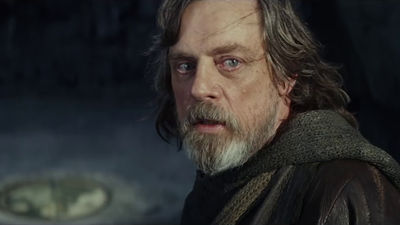 Again he is torn between attempting to remove that darkness and again he is close to striking that darkness down by violence. But now to he steps back from the abys, just in time yet just to late as well. Again darkness lashes out at him, not with crackling lightning from Sidious’ hands, but by seeding in Ben the fear that through hate and anger moulds the suffering caused by Kylo Ren. Again it disarms Luke, though now he retreats into isolation as there is no Anakin to save him.

Like his father, Luke too receives a final chance. Like Anakin needed to pour all his life force into that final act of resistance against the Emperor’s darkness, so must Luke now do the same to keep the spark of rebellion alive, to keep Ben from murdering his mother on the salt plains of Crait, to pass on the torch to Rey. 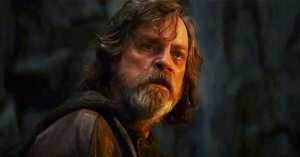 Not by training! Just as it wasn’t Yoda’s brief training on Dagobah that made Luke a Jedi, but it was Luke’s exclamation to be a Jedi upon throwing away the lightsabre. So it also isn’t Luke’s short training of Rey that makes her the Last Jedi but again it is Luke’s statement of fact when facing Kylo.

Luke absorbs the hate- and anger-filled attack of Kylo Ren which, like his father before him, saves the embodiment of hope for the Galaxy. Luke’s arc ends in a manner that rhymes how his father’s arc ended. Anakin’s end was only visible to his son, who asked him to tell his sister … Luke’s end is only visible to his sister and to the new Last Jedi, “Rey from nowhere”. 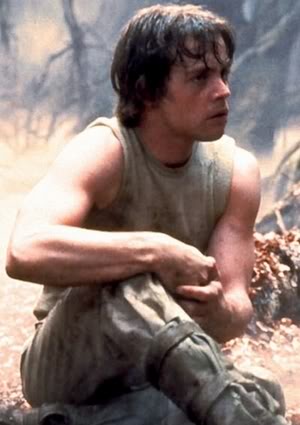 Want more? Check out our

part 2 of this series, the character review for Finn;

spoiler-review of the whole film;

review of the score of The Last Jedi;