If you haven’t been watching Star Wars Resistance so far, now is the time. Poe Dameron just left on a special mission for Leia to pretty much nowhere … to Jakku! “The Core Problem” was a great episode.

Since the last episode the Colossus fuelling station is essentially in lockdown by the First Order. The episode starts out with Kazuda attempting to sneak out a message to Poe, but fortunately his hapless attempt at it is coinciding with Poe’s successful attempt to sneak in. After the obligatory but always loveable greeting-scene between Poe and BB-8 the episode quickly turns to business.

One of the things I really enjoy about Star Wars: Resistance is that it fills us in on how much Leia and Poe actually knew about The First Order and its weaponry prior to the start of The Force Awakens.

I always felt a little disappointed about this aspect of the writing for The Force Awakens, that so little attention was given to letting us know what Leia and her Resistance know, or in fact what anyone else in The New Republic knows about The First Order. In my imaginations the quasi-fanatical First Order was the Star Wars equivalent of a 21st century, territory-holding, terror movement: striking from a distance, driven by total submission to a mission and hatred for the Republic … with nothing but a local militia, the Resistance, to deflect them.

The episode clearly reveals how the Resistance know little about the true means at the First Order’s disposals nor about their ultimate aim.

Kazuda has been remarkably competent as a spy in recent episodes and while the First Order increases its grip on the Colossus, Kazuda has been able to extract useful information for the Resistance. Now with Poe around he can share it with them.

The bulk of this episode follows a mission that Poe and Kazuda undertake on the basis of Kazuda’s intel.

There are plenty of slapstick moments which I always enjoy. Kazuda has an ability not unlike Jar Jar’s to defeat his enemies by means of his clumsiness which I find very entertaining. In this episode this however all falls under the shadow of Poe’s announcement that after this episode he will be off to Jakku. So you and I know what Kazuda and Poe do not know yet: the Resistance is about to learn a lot about The First Order as Star Killer Base will be revealed.

Their mission leads out hero’s to a star system of which the central star has vanished. Not only that, the dead remains of that central star are circled by a collection of destroyed planets, some with their cores removed. For us things are clear: this will have been testing ground and perhaps the construction site of Star Killer Base. What gives the threat an additional flavour is that we know that Kazuda’s father is a senator in the New Republic … most likely currently on Hosnian Prime.

A dark shadow of doom falls upon the series. And I must say I greatly appreciate hos this series now manages to make me care so much more about the Hosnian system

because our main character’s family is there. Sad as it is … it means whenever I will rewatch The Force Awakens I will look at the destruction of the Hosnian system with different eyes. What George Lucas did with undoubting hand in showing us the destruction of Alderaan in front of the eyes of someone who cared, Leia, that we cared about … Abrams and Kasdan forgot to pull the same emotional level on us in Episode VII. I can only thank Filoni and the Story-Group for fixing this now. 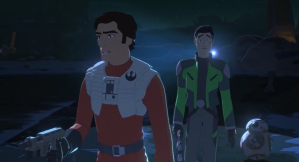 to Kazuda and Niku’s young friends: the Children of Tehar. No doubt Kazuda is about to find out what darkness has been unleashed from that system unto the Galaxy. The remaining episodes in this season will probably tie in Star Wars: Resistance into the timeline of The Force Awakens and The Last Jedi. I am looking forward to re-experiencing those events but now from the angle of Kazuda’s storyline. I have grown very fond of Kazuda and his friends. There is a lot of potential there to make the end of season one memorable, to say the least.

There is every reason to believe that Star Wars: Resistance season 2, which starts several months ahead of Episode IX being released, will contain all kinds of 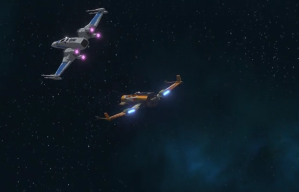 teases and links to Episode IX. But what I find equally entertaining is the thought that Kazuda might actually show up in Episode IX because he is definitely part of the backstory of the Sequel Trilogy now. I know that when watching Episode IX I will be on the look out for at least a Kazuda Xioni cameo but perhaps we will see more of the team than just that. Given the bond that has grown between Poe and Kazuda, given that Leia knows Kazuda personally … our clumsy but ‘best pilot of the galaxy’ might pop up in any of the dogfights that will no doubt be scattered across Episode IX.

See our review of The Children of Tehar, or other Star Wars Resistance reviews, we also have reviews of Star Wars: Rebels, or character studies from The Last Jedi or from Solo, and of course we have original series of posts such as The Forgotten Women of Star Wars, Scene it or My Star Wars Moment.

One thought on “Star Wars Resistance #16: The Core Problem”