Star Wars: Resistance kicked off this weekend with a 33 minute starter episode. Was it what I expected? Let me be brief: it was way better than I expected!

So finally we are at the start of a new series of Star Wars content. Star Wars: Resistance was announced quite a while ago and the reception of the trailers and sneak-previews were mixed. But this weekend the adventures of Kazuda Xiono finally made their debut on the little screen. I will review it here, without spoilers so don’t hesitate to read on.

One thing which I really liked from the start was that the episode immediately felt “urgent”. Kazuda is introduced without many words being spent on back story and

as a result it is the tension and threat that is in the first sequence that causes you to identify with the character before you know anything about him. We are thrown into an encounter of a group of New Republic X-wings with a First Order tie-fighter. The ensuing dog-fight is nicely done and provides a good opener and a great platform for the first big cameo of the series. If you have seen the trailers there will be nothing unexpected, except perhaps that this sequence appears so early on in the series.

It is nice to get to know a little more about the New Republic and its relationship to the Resistance by the way Kazuda interacts both with characters we already know from The Force Awakens and The Last Jedi  but also with new characters. It all feels really natural and smooth and there is a definite Star Wars vibe going on in this series. Fortunately we do get a bit of back-story for Kazuda, but only that which is in a way essential for the story and enough to indicate that there is a lot more going on in his life till now that we probably will explore during the first season. 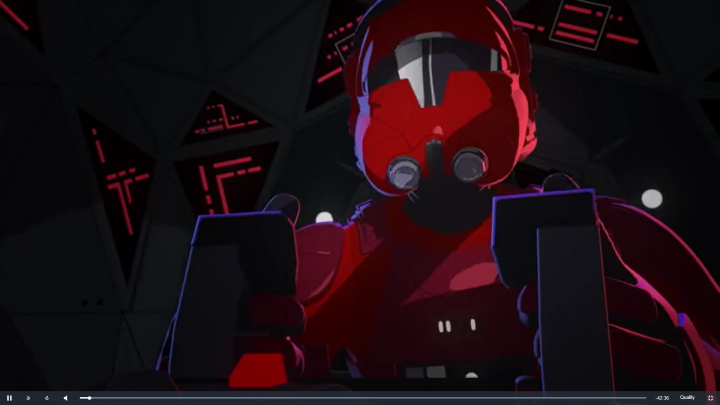 The Red Baron of Tie-fighter pilots also makes a first appearance here, as teased by the trailers and previews. Nothing that reveals to much about this character but again enough to make you wonder what is going on here.

I really enjoyed seeing that the conflict between Resistance and First-Order is a theme right form the start. Filoni does not ask us to sit through many episodes of introductory narrative first before we make contact with Sequel Trilogy material.

The set-up of bringing Kazuda to the  place where the trailer-teased flying races play out is very satisfying. The whole thing has a real Prequel Trilogy feel and much of the atmosphere reminds one of the pod-racing from The Phantom Menace. I found that a very pleasing aspect of the series start. Filoni is a world-builder as he has shown with both Star Wars: The Clone Wars as well as Star Wars: Rebels. It is good to see that continued here as it raises the stakes for us as fans with these stories: if they truly add to the Star Wars universe then they become all the more interesting.

The races that we get to see are fun and beautifully shot. There is that Top Gun feel and the humor is well-placed and well-used. 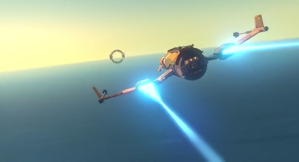 The frequency of occasionally slap-stickish fun is fairly high but I never found it distracting from the story. The stakes in this starter episode are kept appropriately low but significant for Kazuda as an individual. There is enough foreshadowing to indicate that we might be dealing with more than just a good pilot but at no point does the story-telling veer off into unrealistic depictions of mastery. Kazuda is a credibly good pilot and is at the same time “conscript-level” naïve as someone who has been in the New Republic Navy for a while but hasn’t actually seen combat.

With a new show also comes a new flavour of art work to the Star Wars universe. Star Wars: Resistance is clearly in anime style, which some might like and others might detest.

What I found much more striking was something else. Initially, especially in full screen mode, the level of detail and finishing on the art work might seem a little low-fi. But once the race scenes have begun and you see more crowds it does become clear that back ground characters are all individually designed. This is actually a real improvement over Star Wars: Rebels where sometimes the similarity of imperials became a little overwhelming.

Star Wars: Resistance in its first episode shows us plenty of alien species. Some new, some Sequel Trilogy species, but many also from the Prequel Trilogy and from the Star Wars games that were issued in the Old Canon. I enjoyed seeing an Ithorian walk across the screen.

I think Star Wars: Resistance has started off on a fun, exciting and satisfying episode. I can’t wait to see the next one. And yeah … it was nice to see Kazuda fly with these New Republic insignia. Something which was glossed over to completely in The Force Awakens.