The third episode of Star Wars: Resistance offered some time for reflection on what kind of guy Kaz really is. An entertaining episode with a full dose of comedy. Our non-spoiler-review.

It is easy to write a non-spoiler review about this episode because in one way it does nothing to move the story of Star Wars: Resistance forward. So even if I told you everything that happens I would still not spoil anything concerning the major story arcs of the series.

Now for some this might be a bad thing and would probably qualify this episode as a “filler episode”. To a certain extent that is true, however the episode is very entertaining. It delivers on the relationships between Kaz and his crew mates as well as his “boss” Yeager. It becomes increasingly obvious in this episode that this character, Yeager, is a call back to the famous X1-pilot Chuck Yeager who was the first pilot to break through the sound barrier.

The wrong kind of friends

The episode starts out with some banter and Kaz trying to show off his great fix on a racing engine … with a predictable outcome which however is nonetheless funny and amusing. 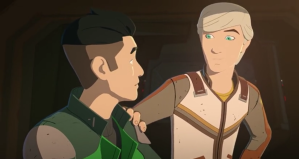 The more serious plot of the episode revolves around Kaz picking up some new friends who appear dubious and having ulterior motives. Interestingly however this is not used as a plot-device to move forward the story about Kaz’s relationship with his buddy Niku, but rather to develop his relationship with Yeager.

The episode contains no dramatic reveals, although we do get some insight into the back story of one of the characters.

We are also introduced to dangers of “hot sauce” rocket fuel as well as to a bit of wider context of the regular races taking place on and around the base. So it is tempting to view this episode as really entertaining, having quite a few good laughs and amusing and well-paced action sequences. At the end the episode in a sense comes full circle and brings us back to what is essentially also its starting point.

Kaz is a little wiser at the end. Yeager has become a bit more approachable. We know a bit more about the other folks on the base. And yet, for all those familiar with Dave Filoni’s story-telling from Star Wars: Rebels and Star Wars: Clone Wars, you can’t escape the feeling that some of the things you have seen and heard in this episode are going to pay-off later in the series. In Rebels he presented us with an early episode of Zeb and Ezra on a shopping run for Melurons. This Resistance episode occasionally feels like that. Who knows, maybe after 4 seasons of Resistance Kaz will also deliver a speech in which he calls back a moment from this episode … I guess we will have to wait and see.

Do you want to read more reviews at Clone Corridor?

3 thoughts on “Star Wars: Resistance #3 Fuel for the Fire”