Yesterday Making Star Wars wrote about two rumours about one of the most beloved Star Wars characters: Darth Vader / Anakin Skywalker! I’ll leave the first rumour, which mainly deals with Rogue One, aside for now and focus on the rumour specifically dealing with the still quite far away Episode VIII, which doesn’t even have a title yet, because it’s one I’ve been thinking about myself for a long time. This is the last potential spoiler alert which I’m giving you in case you truly want to remain completely unspoiled.

Now, for the new rumour. Jason Ward at MSW received the following from a source:

A team in the U.K. are soon heading to the U.S. to begin training Hayden Christensen for a Star Wars: Episode VIII appearance of some sort.

Behind the scenes at Clone Corridor we’ve been wondering for a long time how they could seemingly make Darth Vader such a fundamental character to the storyline of The Force Awakens and not have this presence last throughout the whole Sequel trilogy. Darth Vader is seemingly a major influence on Kylo Ren but in the trailer we also get a view of Leia with Anakin Skywalker’s lightsaber so it’s no stretch to assume many major characters will at least be dealing with his legacy.

So why would it be a good idea to bring Hayden Christensen into the franchise again? There seems to be general surprise that Lucasfilm and Disney would bring a Prequel-actor in, considering the seemingly anti-PT message that the marketing has been spreading. But, as we’ve argued before, this marketing is only meant to get those fans who are already prejudiced to maybe leave those prejudices behind. I don’t believe the strong emphasis on practical effects etc. actually reflects that much on the story of TFA itself which will probably be an equal mix between OT and PT in feel and look alike. So, in my eyes, bringing in Hayden Christensen doesn’t feel like too big a stretch to me, especially if it allows Lucasfilm to actually integrate the Prequels in a way they think is interesting.

The thing that is intriguing is the mention of training. If this is to be a Darth Vader appearance, suit and all, they would hardly need Christensen for that and they probably wouldn’t need him for the action sequences anyway. So is this maybe a flashback to the Clone Wars? I can’t imagine they’d go back to Padawin-Anakin since Christensen himself has aged, so it would have to be The Revenge of the Sith-Anakin, dark curls and all. There is the other possibility that has been flagged by Furious Fanboys which links to the new novel, Aftermath, in which the ‘Acolytes of the Beyond’ seem big fans of Darth Vader and the ideas of resurrection. 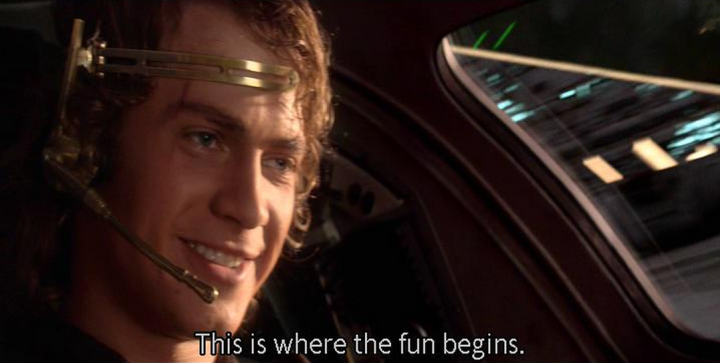 If we were to follow that train of thought than we could get an unburnt and artificial Anakin Skywalker/Darth Vader at the mercy of these Acolytes, which would have to be played by Hayden Christensen. Personally I would not only love to get another glimpse at Anakin Skywalker but it would also be intriguing to see him be brought back and see the Prequel storylines be flipped around. Anakin Skywalker in the PT came from “natural” Force conception and raised to be good, whereas this would be an Anakin Skywalker created artifically through the Force but unlikely to see much good. It could be very interesting and would, officially, tie in the Prequels with the Sequels in a way that is currently close to impossible since the new trilogy needs to be tied in successfully with the Original trilogy first.

As always with rumours of course none of this could actually be happening, but it’s fun to speculate! What do you think?