These two episodes contained a common thread. Even though they were each highlighting backstory elements of one of the Ghost crew’s characters they were also episodes in which Ezra was exposed to a larger universe of The Force beyond what he had seen. They were episodes which increasingly dealt with Ezra’s ability to lead and with the relationship between him and Kanan. The beautiful thing however was that these developments were kept somewhat in the background of what seemed to be stories about someone else.

After The Protector of Concord Dawn, as story in which Sabine’s background was expanded upon and in which we heard a little more about Kanan’s time in the Clone Wars this episode started out as another background story revelation. 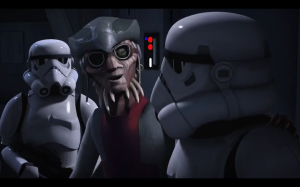 This time Zeb was the focus. We learned a great deal about his role on his home-world before and during the Empire’s genocidal actions there. Legends of the Lasat focussed on Zeb learning to re-evaluate his role with respect to his own people. Where he considered himself a failed Captain of the Guard at the start of the episode, he took on the mantle of an almost Moses-like figure. The inclusion of Hondo Ohnaka was extremely well done. Not only is Hondo simply very funny every time he shows up and has excellent dialogue. But him asking one of the Stormtroopers for his name shows at once Hondo’s witty humanity as well as the Empire’s brutal anonymity.

I am not sure whether the Rebels team did take their clues from Moses’s story, 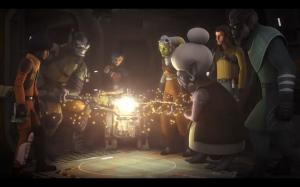 but by the time this episode ended Zeb had been transformed into someone who can lead his people through the desert to a new promised land. It was Zeb who had the ability, using his bowrifle ‘in the way the Ancients would’, to navigate a gravitational anomaly that tore the pursuing imperial ships apart. After bringing his people down to the surface of the legendary new, and old, home-world or Lirasan be returned to the Ghost as a shepherd who would return to the Galaxy far far away to look out for lost souls and show them the way to Lirasan. The Rebels crew of Filoni pulled this off quite convincingly and I loved the sequence where the Ghost passed through warps of Space and Time to reach ‘uncharted regions’ enveloping the legendary lost homeland.

For Ezra this journey also represented a sea-change. Not only did he learn from the Lasat about a different way of living with and using The Force, 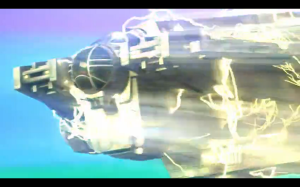 but he even saw his buddy Zeb demonstrate it to great effect. Of course Zeb is not a Force-user but using his bowrifle he can tap into the energy-field so as to further its will, the destiny that it had already laid out in the many possible futures that are difficult to see. Zeb beautifully portrayed the three stages of being a fool (that refuses destiny), a child (that dreams about it) and a warrior (that finds a way to it) and Kanan was nodding in encouraging approval as Ezra joined in the Lasat incantations. In a quiet off-screen moment both Kanan as well as Ezra must have asked themselves where Ezra is on that ladder.

In the episode The Call that followed Legends of Lasat we see the Ghost crew in a dire moment. They are so low on energy that all not strictly necessary equipment, such as heaters, is being switched off as they are on a fuel-collecting run. 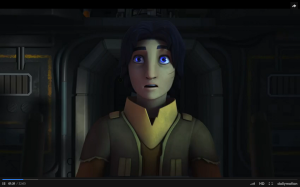 This gives the episode a sense of urgency but also shows how close our Rebel friends are to the edge of being able to make ends meet. There is some very nice dialogue between Sabine and Hera in the cockpit and these two women do feel a bit as the female counter-part team to Kanan and Ezra. Their relationship has clearly evolved. We also hear some piloting history from Hera when she talks to Ezra about the ‘space-whales’ or Purgill, they have run into on their quest for an imperially-used, mining-guild-owned, fuel-rich asteroid. The episode provides, in this non-disruptive way, a nice amount of background about the state of the Galaxy as well as about our Ghost-friends.

But when you look past the basic storyline this episode is yet another expansion of Ezra’s Force-universe. 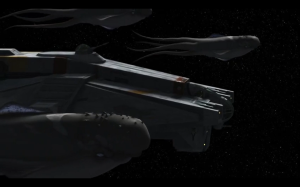 What struck me the most about this is not so much the fact that Ezra can create a force-bond between himself and the Purgill. We have seen him do that before, albeit with smaller creatures including Loth cats. But the first thing that is striking is that Kanan cannot do so. In fact, Kanan does not even sense their presence when Ezra already does. Kanan however trusts Ezra’s connection to them, whereas the idea fills Hera was worry as she holds rather pessimistic views on the Purgills.

A second, and in my eyes crucial, aspect is however the Purgill can actually contact Ezra, i.e. that the Force-bond is not only a two-way thing but the Purgill can even initiate. 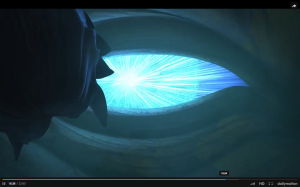 This is most clear in the where Ezra is being saved by the Purgill. The eye discolorizations of Ezra following the same pattern on the Purgill suggests a transfer of some kind from the animal to the boy. We are left in the dark as to what that means all the way till the end of the episode. Because to the surprise of the Ghost crew, after leaving the planet, the whales make hyperspace jumps. Although it may be something that has been the content of legends … it surely is an ability of a living organism that most of you would consider to be … unnatural!

I think these two episodes are foreshadowing what is to come. Ezra’s abilities in The Force are starting to exceed Kanan’s. 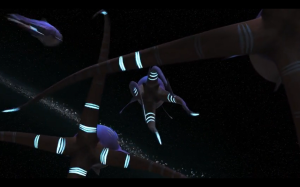 In particular his ability to bond, even at the initiative of an outside source can have a big impact on Ezra’s choices. That Ezra was open to a force-wielding lifeform that displayed unnatural abilities can, in my view, mean only one thing. Ezra’s blooming force-ability has set him onto a path to the Dark side. At least for now.