As some of you may know I’m a literature student and, as such, spend a lot of my time rooting through books looking for links, themes, motifs etc. Part of the reason I love Star Wars so much is because it is open to the same kind of interpretation and digging. Lately a comparison has been forming in my head, one which I find more convincing the more I think about it. Today I’m testing it on you so do let me know what you think in the comments! Warning, I guess, this post will discuss the Frankenstein plot in detail, in case you haven’t read it yet. (You should!)

Frankenstein is one of my favourite novels. Not only is the story of its origin beautifully sensational, it has a brilliant female author and its plot is one which continues to be relevant and which goes very deeply into what it means to be human, what decides good or evil and whether we are doomed by our own birth. At the heart of the novel lies the Creature (or Monster, as some like to call it, but I find that too judgemental). It lies there both thematically and structurally, since the novel has a framework structure. This means that each story encapsulates another, i.e. we start with the story of Captain Walton who, upon finding Victor Frankenstein, makes way as narrator for Frankenstein who himself eventually makes way for the Creature to speak. This is then repeated backwards, as after the Creature it is once again Frankenstein’s words we get and the novel closes with Captain Walton’s narrative. This convoluted structure is part of the appeal of the novel since it allows for a lot of cross-comparisons between the different narrators, in the same way that the inverted structure of Star Wars (VI,V,IV – I, II, III) allows for certain parallels to be more obvious. 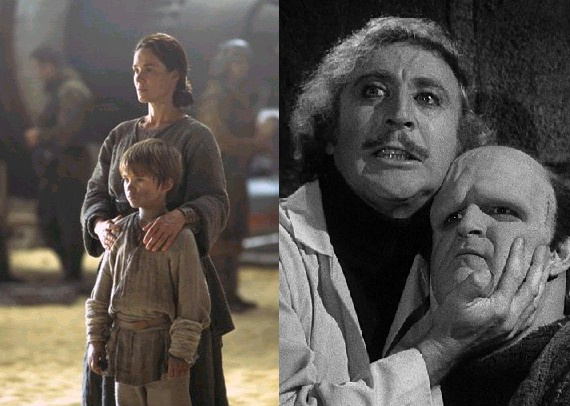 In this post I want to look at the similarities between two of the key characters in Frankenstein and Star Wars, the Creature and Anakin.  Anakin experiences two births, so to say, and both are in their own way not exactly normal. In The Phantom Menace Shmi Skywalker reveals to Qui-Gon Jinn that ‘There is no father. I carried him, I gave birth to him, I raised him.‘ Ignoring the Jesus-parallels here for a moment, this is not an every-day birth. Anakin is created through the Force, without any direct male influence, without any outside corruption. His early life is directed by Shmi, the calmest and kindest character in all of Star Wars despite her harsh surroundings. She is the strongest influence on young Anakin and presents a very nurturing and caring parent. In contrast, the Creature is never thought of as a child by Frankenstein and abhorred from the moment it is born. It never receives the initial kind of love that Anakin does. We also see Anakin talking to an old lady on the street and Padme is the first other main character he speaks to which leads to the majority of the people in Anakin’s early life being female. This establishes Anakin as a very natural character. Kindness and charity come easy to him and his Force ability is enormous. However, from this feminine and nurturing environment Anakin moves into a world that is largely dominated by men. Padme is the only feminine influence that remains in a world of male Jedi and politicians. Here is where a corruption takes place which sets him up for this “second birth.

So, although Anakin’s first birth is as close to natural and pure as you can get, that can not be said of the Creature. Pieced together from the deceased remains of corpses, the Creature is hideous and monstrous to the sensibilities of the rest of the humans of the novel. He is tortured by the fact that his Maker doesn’t love him and him and Frankenstein are caught up in a abusive parent-child relationship in which both commit terrible crimes. What signifies this book is the slow decline of women. Victor’s mother dies early on in the book (significant is she does so while nursing a sick child) and during his own creation process Victor continually dreams of her corpse. She is eventually replaced by Elizabeth, Victor’s fiance. Elizabeth herself dies as a consequence of Victor’s action, effectively eradicating ‘the female’ from the novel. The Creature’s creation is one which goes against the natural order by not having a female presence in it. Mary Shelley shows man overreaching himself by trying to emulate both the female and divine “right” to procreation. This differentiates from Anakin’s birth, which is both female and initiated by the Force. The Creature shouldn’t have been created and it is tortured by the fact it’s existence is wanted by none. 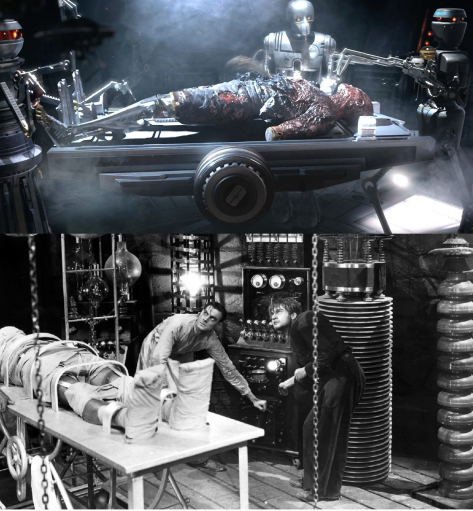 So, where do the similarities to Star Wars lie? In Anakin’s “second birth” of course, his transformation into Darth Vader. Anakin loses his natural background slowly but surely, and even Padme’s presence can’t change that. (Alarcos will discuss the women of Star Wars in his next UCL Class post, which will be a worthwhile read.) As time progresses he loses body parts and gets scarred, until he reaches the end of Revenge of the Sith and, seemingly, loses the rest of his humanity. He is burnt, missing limbs and lost to the Dark Side. He is then ‘remade’ by Darth Sidious, the main corrupting influence in his life. Let’s not forget that it was Sidious, as Palpatine, who brought up the ability to control the midi-chlorians to create life. Sidious sees himself as all-powerful and playing with life is seemingly no big matter to him. Just like Victor Frankenstein he suffers from a severe God-complex which leads him to create a miserable creature for his own goals: Darth Vader.

There are other links between the Creature and Anakin, such as their trouble over the question whether they are good or bad and whether they have any choice in the matter. The Creature is abhorred by all but feels there is a posibility for goodness in him. As a contrast, everyone tells Anakin he is the Chosen One but he feels the darkness inside of him from halfway through Attack of the Clones. 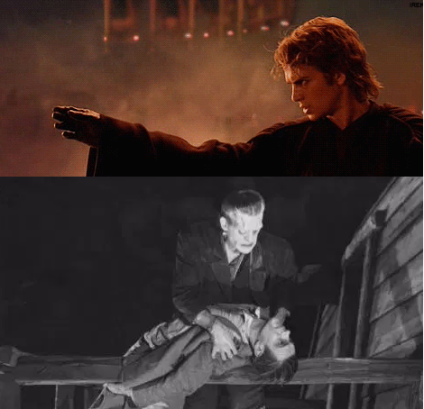 Finally I want to focus on a major contrast between the two characters and that is the idea of redemption. The Creature never truly gets it in Frankenstein. Once his Maker dies of exhaustion after chasing him all over the globe, the Creature is hit by remorse and anguish over his own life. Pushed forward by Frankenstein’s hate for him, the Creature’s heart was filled with evil and not until Frankenstein dies does he seem to realize there could have been another choice. The Creature has to accept the horrid impression Captain Walton has of him and sees himself as such:

‘But it is true that I am a wretch. I have murdered the lovely and the helpless; I have strangled the innocent as they slept and grasped to death his throat who never injured me or any other living thing.’

He exclaims his desire for death and even mentions a funeral pire, before jumping out the cabin window and disappearing into darkness and towards death. Having killed his Maker, who so wronged him, brings the Creature no pleasure because there was nothing he had to live for, no one who will remember him. Compare this to Anakin’s end. After years of following Sidious and committing atrocities, Anakin is forced to choose between his “Maker” and his own son. Choosing the latter, Anakin commits a kind of patricide which hit the Creature with such force. But Anakin’s last words are not of despair but of hope and being saved.

Anakin is, in the end, saved by his first life. The goodness and kindness that was in him from the beginning led to the natural creation of a new hope for him, two children of which one is here to truly see him. Despite his crimes, Anakin is given the chance to make way for kindness again by saving Luke. It is Anakin’s initial natural birth which has given him the capability to work on his own redemption at the last moment. The Creature, by never receiving any kind of love, cannot do so and hence has to live his last days alone in dark, miserable isolation.

Both Frankenstein and Star Wars lend themselves to analysing the grey matter between the absolutes of black and white. Both are characters created wrongfully and yet in one story we get a way in which even a villain can be redeemed. Not by becoming a hero anew, but by saving that which represents his goodness and kindness. If you find any more parallels I haven’t mentioned, please do add in the comments!