We had an absolutely amazing episode this week, showing us more about Ezra’s past, present and future! While all of this was going on we were also teased with another new trailer for The Force Awakens! Slightly bad timing as it was hard to focus on both things at the same time, but oh my it was not disappointing! To see more about the trailer head to our twitter account. Now let’s get on with the last episode of this season of Rebels. This review will contain spoilers so watch the episode before continuing to read. 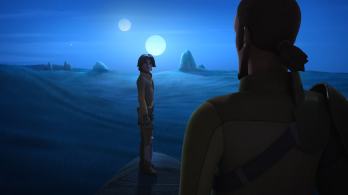 This episode did an  absolutely fantastic job at touching everyone’s hearts with the most emotional moments of all seasons so far. Ezra has a dream in which he sees his parents on Lothal. He of course immediately wants to come to their rescue and asks Hera and Kanan for help. This slightly reminded me of Anakin’s reaction to his nightmares over his mother.  Rebels has put very nice ties to the prequels between Ani and Ezra as both have struggled with giving up their parents and following the right path. Another connection between the two is seen later on in the episode when it is clear that Ezra is slightly unbalanced as he lets his emotions take control which we all know is one of Anakin’s biggest struggles and of course leads to his eventual turn to the dark side. However that being said we have seen Ezra grow immensely as both a Jedi and a boy. Both last week’s and this episode have shown the huge leaps forward Ezra makes in his training. It is nice to see how dedicated both him and Kanan are to training together and learning from each other. It is beautiful to see Kanan always has faith in him even if he might not like Ezra’s current plan.

‘That’s pretty impressive’ – Zeb
‘I tought him that’ – Kanan

There was also a strong sense of family in this episode. Both Hera and Kanan took on the mother and father role perfectly while explaining to Ezra where his parents could be. This was also a real growing moment for Ezra as he seemed to really have matured while thanking both of them for their help. It was very nice to see that Hera and Kanan have really accepted Ezra into the Ghost Crew, they show so much love and help towards Ezra, giving him the family dynamic he still needs at his age. It also showed how much more Hera and Kanan know than they let on which is a nice set up for future episodes. 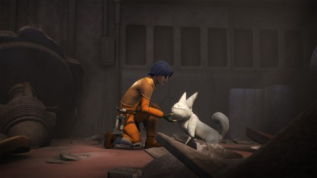 Continuing with he story, Ezra and Kanan make their way to Lothal to try and find Ezra’s parents. Here we meet Ryder Azadi who knew Ezra’s parents and tells him the unfortunate truth behind their fate. I have to say this was the most touching of not just the entire episode but the entire season, I was in absolute tears. Kevin Kiner did another brilliant job, creating the most beautiful soundtrack of all seasons so far. Taylor Gray also did a great job this episode at really showing us Ezra’s raw emotion in his voice when he finds out his parents knew he is part of the rebellion. He recalls his mother saying; ‘If we don’t stand up, who will.’ I thought this was a great look into Ezra’s past and really explains a lot of the actions he takes. It is very apparent Ezra was heavily influenced by his parents at a young age who both seem to have been very passionate and raise him with the principle of always helping others first. This also explains his attraction towards the Rebels and why he wanted to be part of the team so bad – to really make a difference.
Ezra seems to have another vision and sees his parents again who tell him to always have courage and continue on the right path.

‘Without hope, we have nothing’ – Mira Bridger

I have to say all in all ‘Legacy’ really opened up a lot of doors for the next season which I am already highly anticipating. Ezra seems to have really turned into a Jedi this season being challenged by multiple inquisitors (who in my opinion did deserve more screen time) and by really being pushed to his limits both emotionally and physically. Both him and Kanan seem to have really become a team of Jedis and have the same understanding. It was nice to see more of Sabine this episode although I’d say she and Hera really deserved more screen time this season. Overall this was one of the best if not the best episode of the season and a great way to end it!

What do you guys think? Are Ezra’s parents really dead or is there a chance their still alive? What will we encounter in the next season?