Today, May the 4th 2016, we celebrate our first birthday! We are One now officially. First of all we would like to thank everyone who has come to our blog, has read our stuff, has maybe even commented, shared or told friends of our existence! Thank you! Without you it wouldn’t have been the year that it has been! And what a year it was!

Clone Corridor started out as an idea off the excitement of the 2015 Star Wars Celebration in Anaheim. Now there were plenty of interesting and worthwhile blogs and podcasts around, so what could Clone Corridor add to that? From the very first day, one thing that we all three felt was important was to be a blogsite that produces its own content. Very quickly what started out as ‘writing something nice every now and then’ became a far more multimedia endeavour with a Facebook, a Twitter and an Instagram presence as well. Producing just under 17 posts a month, on average, we have gone quite a bit beyond what we originally were thinking we could do.

In the past 12 months we attracted just under 70,000 views by just under 38,500 viewers on the more than 200 posts that we have written since the start. Over 50% of our visitors are from the United States, followed in quite some distance by the United Kingdom, Canada, France and Germany. 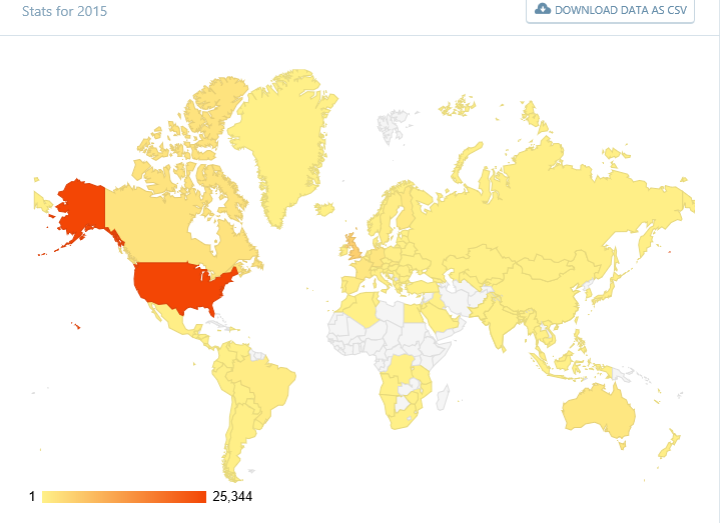 Our most frequently read post was a casting rumour & set sightings that one of our contacts picked up. By now it has been viewed almost 10,000 times mainly because it was picked up by Reddit the same day we posted it. That was exciting, yet Clone Corridor was not, and will not be, a rumour and breaking news site. We leave that to those who are really good at it such as Making Star Wars. But of course if we pick up something we will let you know. 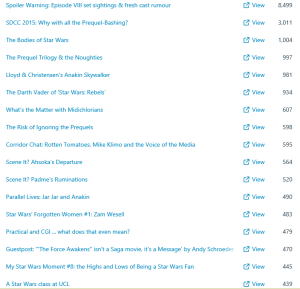 Our most frequently read posts that actually contained original content we produced for you were very varied in nature. The first post that actually struck a nerve out there in the community was JuliWitte’s post about the SDCC reel and its implicit prequel-bashing that has now been viewed 3250 times. Rogue47’s post on the Darth Vader we encounter in Star Wars rebels ranks second with 1750 views. Several of the posts posted first in 2015 have now crossed the mark of 1000 views. It is so remarkable to see how different posts evolve so differently. There are those posts that fly very high for a day or two or maybe a week and then sink into oblivion. But also those who never seem to do very much until you see what has accumulated in terms of view across a year.

From the start of Clone Corridor we wanted to write not just single posts about interesting topics, but also define a few interesting post-series. With Season 2 of Rebels about to kick-off it was clear that regular reviews of Star Wars: Rebels were one such series we were looking forward to making. LeonieWitte spent almost the entire Rebels season in Florida in the US delivering us Rebels reviews before the British-resident half of Clone Corridor was even awake. As a result of this geographic distribution also our spoiler and non-spoiler reviews for The Force Awakens came from both sides of the Atlantic.

But reviews weren’t our only serialised posts. From the start we had the ambitious plan to also include contributions of others in our serialised postings. The first idea for such a series was our ‘My Star Wars Moment’ series. In 13 instalments readers of Clone Corridor shared special moments, good and bad, beautiful and ugly,  in which Star Wars played a prominent role, with us. Posts ranging from the first experiences of a Star Wars movie during a premiere, through the shock of recognising a Sith Lord in a board meeting down to a very special trip along some of the locations in Italy that were to be Naboo in the Prequels. We are very grateful to all the contributors to that series in our first year! It has been a key stone in getting Clone Corridor going!

Apart from the Star Wars moments we were also hoping to seduce some into telling us something about their work on or with Star Wars. We were very glad to host a number of exciting guest posts this first year. Amongst others we had great contributions from Pablo, the maker of the Star Wars Poetry video that has gone viral during this year, from the independent director David Salazar on Leia, Padme and rhyming in Star Wars, from Bradley Weatherholt about his ‘The Prequels Strike Back’ film project that is now due for release and from independent director Andy Schroeder about the message in The Force Awakens. Another series for which we also invite contributions and that we have only recently begun is ‘The Anthology Movie I’ld like to see’ which has seen interesting entries such as for example by Thomas Storai on the Siege of Mandalore.

Another series we started early on and have been able to develop into something nice that attracts a fair share of views are our Scene it? posts. As we are constantly trying to explore interesting content formats we will keep adding serialised posts to our output and of course inevitably some of these series may also come to a natural, temporary, finish. But also in the next year will we try to be a platform for Star Wars fans and by Star Wars fans.

We definitely should send out a big thank you to sites which have been referring to us. Although we are happy to see that by now the largest number of views come through to us via search engines, we cannot but be grateful to the Star Wars Prequel Appreciation Society. With well over 3,500 referrals from that great site, which we ourselves visit regularly as well, it ranks first among all our non-search-engine referrers. Thank you LazyPadawan! With around 1,500 referrals coming from TheForce.Net boards we also owe gratitude and a thank you to them.

About 5,500 views have found their way to our blog through our Facebook Community. 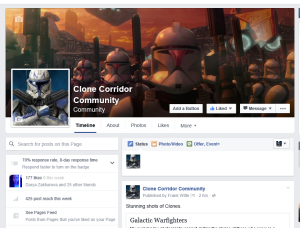 Just compare this to the roughly 5,100 views we received through Reddit and it becomes obvious how central our Facebook Community is to this blog. Our Twitter account directed roughly 2,000 views towards our blogsite but more importantly, especially during the first half of the Star Wars: Rebels season 2 we were able to engage in the live-tweeting during the episode thanks to Leonie’s presence in the US, creating many a memorable moment in the tweetosphere. 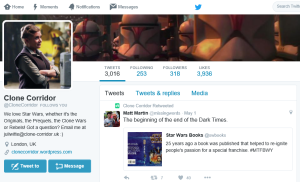 is managed by JuliWitte and LeonieWitte our Clone-Corridor Instagram account has also become a core part of our presence. With well over a hundred followers and well over 150 posts last year is has proven to be a solid third leg for Clone Corridor to stand upon. From live-tweeting our experiences at the Midnight premiere of The Force Awakens and the episodes of Star Wars Rebels down to never-ending Twitter-chats, Facebook shares and Instagram responses from fellow Star Wars bloggers, 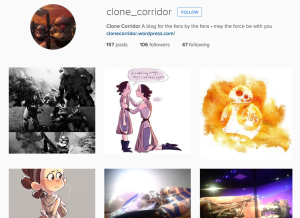 Rebels cast members and followers of our pages, these three media have become a crucial part of Clone Corridor.

We are proud and satisfied that in this first year of Clone Corridor we have not only made many new friends and expanded our circle of Star Wars buddies, but also that we have managed to achieve part of our ambition of becoming a blog site that concentrates on producing original material for you to read and enjoy. The biggest possible thank you of course should go to George Lucas, who started it all, and all those inspired makers of current and upcoming Star Wars, such as Kathleen Kennedy, JJ Abrams, Dave Filoni, Rian Johnson and all the rest from Daisy Ridley through Pablo Hidalgo to Vanessa Marshall, that will allow sites like ours to keep writing, thinking and enjoying new Star Wars. We are happy we were able to do our part this year despite the fact that we were scattered across various countries and continents at times.

We will try to make our second year better than our first! And there is so much to look forward to. Whether it is the release of Star Wars: Rogue One, or Season 3 of Star Wars: Rebels or the upcoming Star Wars Celebration

right here in our front garden in East London. We will try to present you with posts and articles that are hopefully entertaining and interesting reads, that we try to write from an original angle, an alternative point of view. We hope to continue some of our dearest series while we aim to add new and interesting formats for you to contribute to as well. Finally, we have experimented a little with some live-elements such as live-tweeting and we surely hope to increase these activities as well as finally expand into podcasting and using our newly set-up YouTube channel in the not-to-distant future.

Thank you to all or readers for sticking with us and dropping by so frequently! We hope you are having a good time here, feel free to share our posts or to keep referring to us on  appropriate discussion threads on message boards you visit if you feel our posts add something to those discussions. Finally feel free to contact us whenever you have suggestions or contributions you would like to make! May the Force be with you! Always!

3 thoughts on “One Year of Clone Corridor”