Hey everyone it’s been a busy few months as the buzz over TFA is only slowly getting a bit less. One of my friends recently bought the BB8 Sphero Droid and I of course immediately asked him to write a review about it! Enjoy! 🙂

Now that I’ve finally stopped screaming about The Force Awakens movie like a Bieber tween…let’s unbox this bad boy :D.
It’s no secret that no robot has come anywhere NEAR being loved by the masses than everyone’s favourite astromech Droid, R2-D2. That is, until The Force Awakens presented a new addition to the lovable droid family. Enter stage right…BB-8.

That’s right, this rolling droid made its first appearance in The Force Awakens trailer and since then everyone, including yours truly, have replaced everything on their Christmas list for their very own real-life version of this droid. Fortunately, the badasses at Sphero, have heard our wishes and created their own version of our favourite droid. (R2-D2: beep beep boop), eherm, I meant…ONE of our favourite droids.

Sphero’s app controlled BB-8 Droid is a miniature (emphasis on miniature) version of the Star Wars: The Force Awakens lovable sidekick, BB-8. Made popular for it’s ability to roll and balance all by itself.

BB-8 is broken down into 2 major parts. The first, a smooth plastic body housing the motor, which is approximately 3 inches in diameter and wrapped in sweet BB-8 graphics that are pretty resistant to any kind of wear and tear you can inflict on it without the fear of peeling or fading. For the older readers, that means no scuff marks after unfortunate run-ins with your furniture (That’s a [+1] – for those of you who still use Google plus – smh, you should be ashamed lol jk).

The inside of BB-8’s body is rigged with an internal self righting mechanism much like that of a human hamster ball, wherein you’re the mechanism that allows the spherical ball to move in various directions by climbing the wall.

The second part of BB-8 is it’s detachable head that is kept together with it’s body using a mixture of attracting and repelling magnets. The later is used to make sure the head stays in place while rolling. These magnets are pretty sturdy and can keep BB-8 from getting decapitated should he bump into anything, like say, a shoe or a couch. However every once in awhile, if you’ve got some serious momentum and you drive into a space that’s too small for his head, it may pop off. No worries though because it’s extremely easy to re-attach. Other than for aesthetic appeal, the head of this droid does nothing else that I’m aware of.

If you didn’t know, the way you control this droid is via a Star Wars app that is by far among the slickest I’ve played with. It comes with all the branding bells and whistles. From the Star Wars theme songs to the giggle inducing BB-8 focused beeps & animations. The app has three major functions: Drive (manual controls), Messaging (where you can send “holographic” drone messages to yourself much like Leia did with R2-D2), and Patrol mode (allowing BB-8 to patrol around your living room). 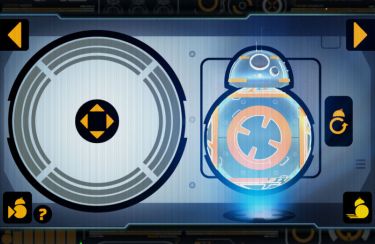 The direction controls, located on the left side of this screen, allow you to control the movements and direction of BB-8. After orienting the drone it was time to take this out for a test-run. I have to say, this was an amazing handling experience. This droid can has some very impressive maneuverability. If this is your first time testing out a Sphero it’ll be a liiiiitle tough to get used to, but after 1 or 2 minutes of playing around with this, you’re as good as gold. With a battery life of about 1 hour, you’re in for loads of fun. Even when you’re charging this goof-ball, he’s constantly entertaining you. The base of the charge port has a little button that turns bb-8 into your little desk companion with adorable little head nods & gestures.

In reality, the Sphero is nothing more than an extremely well designed rolling ball. However, with the animation and movement of its head, as well as the realistic sounds from the app, it takes on an entirely new loveable personality.

By far, one of the most entertaining pieces of functionality. It allows you to send BB-8 to patrol the surrounding area on his own. Because this droid lacks sensors, it bumps into obstacles quite often, registering them on your patrol screen as things to be avoided.
The app monitors the droids speed, heading, and range as to allow it to better navigate the room moving forward. This mode is especially fun when you have a puppy or an inquisitive cat and is similar to having a self directing laser pointer that talks to you visa vi beeps and boops.

Overall this is an amazing toy and I highly recommend getting it for yourself, a friend, and/or a family member. This isn’t just another piece of Star Wars branded merchandise but rather a delightful experience in a box.

And there you have it! Hope everyone found this a fun read and helpful in making their mind up about whether to buy this little fellow or not! Let us know in the comments how your experience has been with the droid!

One thought on “BB-8 SPHERO DROID REVIEW by Emmanuel Kaska”