Kreia is a character you will not find in any of the films or animation series but in the computer game Knights of the Old Republic II. Nevertheless she deserves to be discussed and mentioned along side the most beloved female characters of the Star Wars Saga. The game managed to create a tantalizing female character such as we have not encountered since, elsewhere in the Galaxy.

We encounter Kreia in KoTOR II as a teacher. But as she comes along on your adventures and teaches you about The Force you rapidly find out she is a very unusual and intense teacher. There are no easy answers to the question whether Kreia is a good or an evil character, to whether what she teaches is light or dark.

The experience of being taught by her is actually so intense for many that some have gone through the trouble of putting her entire teaching on YouTube.

Kreia is a fascinating character because she consistently walks a thin line between morally good and morally evil. Her teachings about the Force bring across very forcefully how the 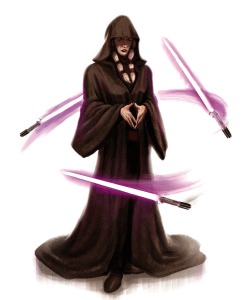 fate of the Galaxy resides in the very many small events that occur around you every day. She emphasizes how every thing you do represents some form of manipulation of this fate and how your duty as a force-user is to make conscious choices in this. She never lectures you about good or evil, but always points out that whatever little thing you do has possibly far-reaching consequences. And because of that, there is no excuse not to think about what the ‘echoes’ of your actions will entail. Her teachings link to Qui Gon’s and Yoda’s yet they are far more disconcerting.

I believe it was a wonderful choice to make her a female character. On the one hand her constant teaching and caring for you as a main character, her correcting or rewarding when you make mistakes or progress have a distinct motherly side to them. Yet it is never stereotypically so. She has the same groundedness and firm strength that you also see in someone like Shmi Skywalker, yet she always has a very uncomfortable edge about it. She is deeply manipulative and yet it is very difficult not to listen to her when she speaks.

There are very few characters in Star Wars who really speak purely through their words rather than their actions. 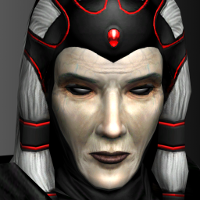 Kreia will only resort to action in very late stages of your relationship with her. By that time your training is almost complete and you will have undergone a transformation in how you view the Force and how you see the distinctions between Sith and Jedi. The best thing of it all is that even then you are never sure what of the things she said you agree with, and which make you so uncomfortable that you wish you never heard them.

In the end that is also how I look back on making that acquaintance and travelling thee Galaxy with Kreia. 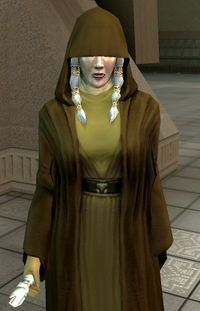 Part of her is deeply unsympathetic and yet it is very hard to tear yourself away from what she says, who she is and what she does and has done. Just like it is almost impossible not to feel empathy for Anakin Skywalker throughout the 6 Saga films despite being abhorred by the choices he makes, it is similarly difficult not to be affected by what Kreia tells you. Even when she tells you that there must always be betrayal.

Kreia is a fascinating female character in Star Wars, one of a kind we have not seen again after that. The voice actress Sara Kestelman delivered an absolutely stellar performance when voicing Kreia. The inflections and timbre-changes in her voice are powerful testament not only to the intensity of the character she portrays, but also to the richness and the profoundness of the ‘female voice in Star Wars’. A voice that also includes that of Kreia, no matter how uncomfortable that may make you feel.