The second half of the second season of Star Wars: Rebels is finally here! After the trailer teased the web-world into ecstasy less than a week ago, it was the 12th episode of Season 2 that was going to kick off what is ramping up to be an epic run! So how did A Princess on Lothal get us going? It was good! Very Good! This post contains Spoilers!

We pick up the thread of season 2 in a situation just after Ezra has received the awful, hope-dashing, news about his parents. In the first half of Season 2 we saw how one of our

favorite Clone Wars characters, Captain Rex, became part of the Rebellion but during the start of the second half he is evidently engaged elsewhere. I like that! Not only does it suggest that the Rebellion now is already significantly more than just the crew of the Ghost and their allies, but also that Rex is accepted among the Rebels not just because of his close connection to Ahsoka. She is of course that other great character from Clone Wars that is playing a pivotal role in Rebels despite the fact that she too is often on missions elsewhere.

This episode will treat us to another well-known character that will be added to the larger Rebels niche in the Star Wars Universe some 4 years before A New Hope. Princess Leia is the same age as Ezra and in many other ways his equal as well. I thought Leia was

introduced well and in many scenes we see her display the same fearlessness and ease at commandeering others that we know from A New Hope. She may be a bit milder still, but surely is no less independent and strong-willed than she is in the Original Trilogy. It was fun to see her engage with our beloved Rebel’s characters, especially Kanan and Ezra. I do think that it was a bit of a missed opportunity not to have her engage also with Hera and Sabine. Such a scene would, in my view, have been very natural and rewarding.

The story of A Princess on Lothal is fun, well animated and allows especially Ezra some good character moments. It seemed evident to me that the reveal of the first half of the season regarding Ezra’s parents has freshly opened a wound full of doubts about what his role in the Galaxy is supposed to be. Kanan is a doer, definitely in this episode, which seems to leave him just a little too little time for Ezra at times. But it is noticed and Leia shares a moment of contemplation with Ezra. My only other gripe with this great episode is her line in that moment: “I feel like I have to …” really? It seemed to me an enormously un-Leia-like ‘like’ in that line. 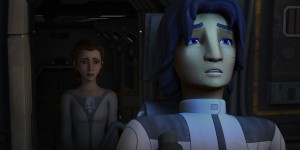 location of Lothal, the episode also quietly sets up some threads for the second half of the season. I believe the slow ‘drift’ of Ezra was hinted at very well and I very much look forward to seeing that continue. The reluctant joining of the Rebels by the Governor after realizing that Kanan is a Jedi was another such fairly subtle hint at more backstory yet to be revealed. While Leia’s appearance surely was much of a one-off it never felt like a cameo. She played an essential part in this episode and I hope Filoni and crew will use her again later on in this or the following Season. I very much enjoyed this episode and can’t wait for the next one!