And we are back with another deeper look into one of our beloved characters of the new trilogy. Warning that this of course will contain spoilers (so we can really get into the juicy details of the story) so if you haven’t seen the film yet read our non-spoiler review here. This is number five in our series of character studies. Links to the others can be found at the bottom of the article or simply go back to the homepage. Now without further ado, let’s have a closer look at Poe Dameron.

I think that most fans of the new trilogy were quite saddened by the lack of screentime given to Poe in The Force Awakens. After his initial opening sequence we hardly get a glim 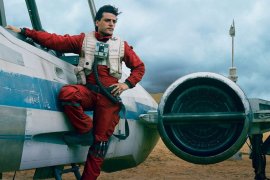 pse of him which truly is a shame because he is such a great character. However we really got a good feel for what Poe stands for and who he is in these few scenes in TFA. It is clear that he is a truly amazing flyer, fighter and really has put his all into the resistance. Unlike Finn (discussed in character study #2) it is clear that he has been a part of the resistance for quite a while and is fully committed to the cause. So we could ask ourselves, what is there left to do with this character? What is it that he still has to learn? Bring in Vice Admiral Holdo.

have been cut to 1 minute if she would have just ‘not been so stubborn and told Poe her plan’. To me this completely misses the point and a scenario like that would not have made it possible for Poe to develop as a character. So let’s look at this development and Holdo’s role in it. The Last Jedi starts also ( like TFA) with an action sequence of Poe against the First Order. This time he concentrates his wit and humour to General Hux and not Kylo Ren but continues with the same recklessness that we saw in TFA. His impulsive actions might end with a ‘win’ for the resistance however the consequences/losses are often big. In the Force Awakens we see this as the entire village is almost blown up and Lor San Tekka (that old guy at the beginning talking to Poe, for those who aren’t too familiar with all the names) ends up giving his life after being in contact with Poe. Loss like this is seen at the beginning of the Last Jedi as they lose their entire bomber squad and many members of the Resistance because Poe defies Leia’s orders to back down and continues with the attack. It is clear that Leia feels these losses very close to heart and much more so than Poe who sees them more as a necessity for the Resistance to get where they want to go. It’s this impulsiveness that is showcased at the beginning of both movies which becomes Poe’s main flaw and therefore the focus of his development.

Now going back to Holdo’s role in all of this, before the two meet Leia has demoted Poe meaning he has less of a say in all the decisions made on the bridge. When a new Admiral needs to be appointed it is clear in one of the shots that Poe is getting ready for his name to be called which in a way shows the extent of his ego. When it’s clear this is not the case he for the first time encounters the sense of not having as much influence as he might believe he has. Now when the two meet Holdo acknowledges Leia’s decision to demote Poe and treats him appropriately or as he (and much of the audience) sees it; unfairly. With his new position he needs to learn that he can’t make these impulsive rash decisions and isn’t any more special than some of the other fighters in the Resistance. Truly when you think about it how often do you see one of the people in charge talk to individual fighters about their exact plans? That’s right; never. Poe has become one of the more regular fighters and therefore also needs to accept that with this comes showing the people in command respect and following orders without prior knowledge as to what they may be and influencing them. Poe kicks up a fuzz throughout the entire first half if not more of the film as he feels he has a right to know exactly what’s going on. When Leia later tells him what Vice Admiral Holdo’s plan was he realizes this was a very thought through plan and “could actually work”. He now has to swallow his pride and realize he made a misjudgement in admiral Holdo. He had again sprung into action as his ego had gotten in the way and he believed he could ‘save the resistance and be the hero’. When he sees Holdo’s sacrifice for the rebellion he starts to understand what it truly takes and means to become a leader. It’s not always about showing off your smarts and skills to everyone but about trying to find solutions to tricky situations. About saving what is left and not always fighting what is hunting you.

When what’s left of the Resistance lands on Crait, Poe is truly tested and has

a chance to show Leia that he has learned from previous mistakes. Does he have what it takes to become a leader? By the end of the scenes on Crait I think the answer is clearly yes. Giving the order to stop the attack against the AT-M6’s shows he realizes that the continuation of an attack would only lead to more losses and would not compare to the small dent they would make in the First Order’s military. This is something that the Poe we met at both the beginning of TFA and TLJ would not have seen and he most probably would have done something more like Finn and ploughed on.

Finally when leading the small group of Resistance fighters out of the cave Leia tells the others to “follow him” after they all look at her for permission. Now I think that this means more than to just follow him out of the cave.  It is clear that Leia is worn down by the end of the film and it is time for someone to take over. Throughout the film Leia has been telling Poe that he needs to think his actions through and has been trying to teach him how to lead. It seems that by the end of TLJ she is satisfied with how Poe handles himself and is ready to hand over the reigns to someone else. It looks like Poe in episode 9 will have a much more complicated role in the Resistance and will showcase more of his leadership rather than his skills as a fighter.

So are you looking forward to seeing more of Poe as a commander in the upcoming film?