Pretty exciting news, as on the third day of Star Wars Celebration 2017 we got our first trailer for the next season of Star Wars Rebels! The panel had an overall mix of emotions as it was clear, again, how invested the cast are in their characters and in the series as a whole. Filoni announced that the upcoming season of Rebels will indeed be the final season, stating he wanted to bring it to completion (as he was unable to do so for The Clone Wars) and round off the story properly. As saddened as we are by this news, I personally believe it is the right thing to do as it means we will see all characters and storylines come to completion. So for now let’s focus on the exciting season ahead and take a closer look at this incredible trailer!!

The trailer starts with a voice over by Hera, showing us all principle characters and clips from the previous season. Hera ends the voice over with;

The trailer now officially begins and starts us off with a shot of Ezra riding a wolf. We have been looking at this image for a while trying to figure out who is riding with him. It

is clearly another mandalorian however does not seem to be Sabine but more like someone wearing The Death Watch uniform. However it also appears as if the other character is infact unconscious and is being carried away with haste. We have heard about these massive wolves before (Filoni mentioned them in the Ahsoka panel last year at celebration and showed us concept art of Ahsoka riding one of them which looks very familiar to this image) but have never actually seen them fully animated in the series. It seems the two characters are carrying something with them (most likely a helmet/jetpack) and the landscape makes it out to be set on Lothal. The trailer continues with shots of mandalorians fighting and shows us the rebels base on Yavin. We are then treated to a beautiful shot of Hera and Kanan in what seems to be a moment of love between the 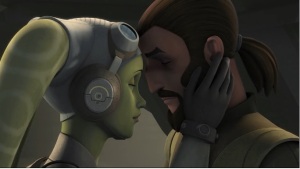 two. It is clear they are in the middle of an embrace/kiss which of course made all of our hearts jump. However I still have the feeling Kanan is not going to survive the end of this season and so really it also makes it all even more tragic. The two characters have really won over all of our hearts and this is definitely a moment we have all been waiting to see. I think everyone agrees with me when I say I see the two of them as the parents of the Ghost Crew (even though Freddie Prince Jr. seems to disagree as he stated very clearly he sees Tiya more as a sister than a daughter during the panel today) and it will be a truly heartbreaking moment to see that come to an end. Moving on with the trailer however,

the immediate next shot is a shot of Ezra and Sabine (holding the Dark Sabre) leading a group of Mandalorians into battle it seems. We can see that Ezra (finally) also has a jet pack strapped to him. It seems as if Sabine has painted over the helmet Ezra is wearing to make it his own. This again reinforces the idea that we are going to see some sort of a big battle on Lothal which is backed up by something that Taylor Gray as he stated during the panel that in the upcoming season Ezra will focus more on what he can do for his people back home. The next few seconds of the trailer consist of shots of in air battles, sabine using the Dark Sabre and the return of Saw Gerrera.  We then see a member of the Death Watch take of their helmet to reveal Bo-Katan; Satine’s sister. We

saw her for the last time in the Clone Wars in a conversation with Obi-Wan Kenobi where he reveals she is in fact Satine’s sister. This therefore for me immediately brought  up the question; are we going to see Obi-Wan in the next season? Will the two meet again? I highly doubt it however it is something I would love to see! The trailer continues to show us more of the upcoming season. We see shots of Kallus (looking a lot more rough around the edges) returning to the crew, space battles, new awesome flight tactics by Hera (it seems as if she jumps into hyperspace while flying through a ship of the empire), something that seems to be a fight between Sabine and Bo Katan, lots of explosions, U wings which we

also saw in Rogue one and the introduction of a ‘new’ character voiced by Warwick Davis. His name is Rukh and he is known as Admiral Thrawn’s personal assassin. However we also know that he stabs Thrawn and kills him so is that what we will see in this upcoming season?

We continue with the trailer (we are almost at the end guys!) and see a shot of Sabine and Bo Katan standing side by side. In this shot however Bo Katan is holding the Dark Sabre which would suggest that Sabine has chosen her to be the next leader of the Mandalorian which we know was what she set out to do from the previous Rebels season. 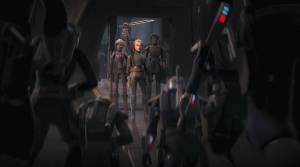 The trailer ends with a shot of Hera (don’t you love the completeness of this trailer, we start with Hera and we end with Hera) standing in front of what seems to be a U Wing, but I might be wrong here, and saying one of the most famous lines of all in Star Wars;

“May the force be with you”

So what do we make of all of this? IT’S GOING TO BE AN EPIC FINAL SEASON. Dave Filoni himself said we would see things we have never seen before, as they really want to make the end special and as epic as possible. What do you guys think will be the fate of the Ghost Crew? Will we see any other new characters? Will there be a mention of Ahsoka? Whatever will be thrown at us we will face it together here on Clone Corridor.