The trailer for the second half of Season two dropped earlier tonight and I will give a full-spoiler review here. If you don’t want to be spoiled, don’t read on and don’t watch the trailer … but oh my … it is so worth the watch! You are in for a treat in the rest of this season. If you haven’t caught up with Rebels yet you better plan some binge watching this weekend!

The trailer starts out with a grim image of Ahsoka, Kanan and Ezra on a planet we have not seen before.

It is great to see that Dave Filoni continues the Lucas-tradition of world-building as a continuing effort rather than to take the Star Wars galaxy as a fixed back-drop for just ‘more stories’. When there is one thing that this trailer provides evidence for then it is the degree to which Filoni stands in the tradition of Lucas, yet in his very own way. Especially towards the end of the trailer the bombardment with story-telling gems is just so intense that it takes your breath away.

It is evident from the trailer that the Galaxy is dark place, 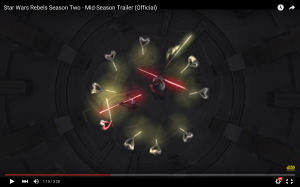 but our friends are evidently required to travel to even darker places within that Galaxy. The trailer is rife with Sith symbolism and visuals. Ezra’s growing powers, that are also evident from many of the shots in the trailer (yes, Ezra is cutting off the wing of a Tie fighter in flight!), make him increasingly vulnerable to the Dark Side. We see Yoda teaching him on maintaining the right balance and caring about ‘how’ you win instead of just ‘that’ you win. Yoda senses danger (which by itself is rather Yodaesque anyway) and when we see a few shots later how Ezra holds a Sith Holocron in his hand we know Yoda is not kidding.

The trailer reveals a number of truly stunning returns to the screen. What many of us already expected is that Hera’s father, Cham Syndulla, 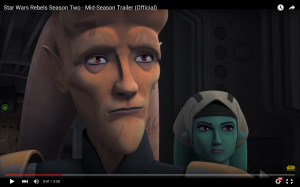 a freedom fighter from The Clone Wars, returns as part of ‘enforcements’ sent to support our Rebels. It is a sure sign that we will hear more about Hera’s backstory as was already clear in the first half of this season.

Where the first half of the season revealed a little more about Sabine’s Mandalorian past by her interaction with an old friend from bounty hunter times, the second half will see the appearance of several Mandalorians whose uniforms resemble, yet are not identical with, the Death Watch Mandalorians from the Clone Wars. We know Sabine is Clan Viszla, so a tie in here would actually be very natural.

It had been in the pipeline already for several weeks and recently released ‘clips’ confirmed that Leia Organa is also in this season of Rebels. I think it is likely we will see her in a single episode close to the start of the season. I doubt we will see her often, but we might every now and then.

Darth Vader makes a re-appearance in the second half of this season after his crucial role in the season’s opener. I suspect that the scenes we see with him are mainly from the season 2 finale. Given the intensity of that material, that seems to involve the visit to a Sith Temple, it would also not surprise me when the finale is part of a 2 or 3 episode Arc.

However the return that must have caught most of us completely unprepared was the one of the character who referred to himself as ‘Old Master’. Clearly voiced by Sam Wittwer and despite the hood clearly displaying marked facial features, this Old Master is none other than Darth Maul. The addition of this former Sith Lord to the Rebel’s universe is in my view extremely interesting. He seems clearly aged and we have no idea as to what his state is, 15 years after we last saw him in the ‘Son of Dathomir’comics.

Internet speculation has it that the Sith Temple where some of this seems to play out is on Malachor 5, the planet ravaged by Revan during the Mandalorian Wars of the ‘Knights of the Old Republic’ era.

Given that in his Clone Wars era Filoni showed no hesitation to bring Sith of Old back into the game with Darth Bane, it wouldn’t surprise me if he also felt no hesitation to be inspired by the Old Republic lore. This is all the more important as a second surprising shot in the trailer reveals Ezra wielding a green tri-sabre and this is a design that is also linked to Malachor 5. For those who know the Knights of the Old Republic II game, the design of the Sith Temple in this Rebels season does have the same ‘feel’ to it as the Malachor 5 Sith temple where Kreia has her final showdown with The Exile.

There is so much in this trailer that is worth mentioning and speculating over. Such as what are these Jedi Temple Guards doing in Rebels?

Some responders on the Internet worry that there might be too many Jedi in this series if all of this happens. I could however just as well imagine that the episodes which deal with these events have a high ‘Mortis-like’ character or use story-telling devices such as the Yoda Arc in the Lost Missions from the Clone Wars. We know that Filoni and his team know how to do such stories.

What is probably the most emotional element of this trailer: the story arc of Ahsoka and Anakin. 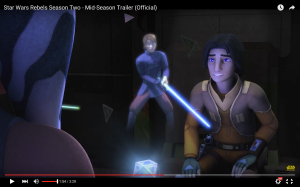 Not only do we see Ahsoka show Ezra who her master Anakin was using a holographic projection of him but we even hear Darth Vader address her in Anakin’s voice, voiced by Matt Lanter. He speaks the heartbreaking lines “Ahsoka, why did you leave?” and “Do you know … what I have become?” The final shot of the trailer shows the two in battle. Although some of these shots have a significantly ‘surreal’ or even spiritual character it seems inevitable that a clash between the two will form part of season two.

I doubt that it will be their definitive confrontation and the lines we have heard make me confident that the writers will not have taken the easy-way-out of a black-and-white battle between an antagonist and a protagonist.

Star Wars: Rebels had been confined to Lothal and surroundings pretty much in the entire first season. In the second season we have started visiting a larger variety of worlds and from the trailer I have the feeling that some of the visual and creative splendour of world-building that we saw in The Clone Wars is coming back to Rebels now. That is a good thing also because it is something that the makers of The Force Awakens seemed to have forgotten. Episode VII gives us a planet that looks like Tatooine (Jakku), two planets hat look like Endor/Yavin IV cross-overs, a planet that is a Death Star / Hoth crossover and finally a waterworld with some rocks. The thing is … they all look like Earth.

The Prequels gave us Coruscant, Naboo, Kamino, Geonosis and Mustafar as planets where main sequences played out, but also beauties like Felucia. 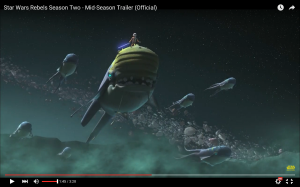 All were Planets that were unlike any we had seen before in Star Wars. The Clone Wars continued this tradition and especially in the later seasons the design and world-building were exceptional. It is great to see that Star Wars: Rebels now also continues this trend. It is something that either Rian Johnson and Colin Trevorrow should take this to heart or LucasFilm should consider giving Filoni’s team a live-action film to go for.

In the mean time however, we can look forward to an awesome second half of season two in the knowledge that season 3 is already in the making!