One of the things that has always drawn me to the Star Wars saga is its commitment to storytelling. Lucas and co. went out of their way to find old myths and legends to which they could link his characters, narrative paths along which they could map their own journey. For the Originals Lucas heavily relied on Joseph Campbell’s the Hero’s Journey, but for the Prequels he also looked further, to the Arthuriana. Arthuriana is the collection name for all types of writing on King Arthur and his court. Three of the most recognizable and popular characters from the Arthuriana are King Arthur himself, Queen Guinevere and Lancelot. I’d quite happily consider them one of the first love-triangles that ruined a kingdom. But how, do I hear you ask, are these related to Anakin and Padmé ? Let me try to explain.

First I want to just re-emphasise the fact that the love between Anakin and Padmé, as written by George Lucas, is meant to fall in this tradition of grand love affairs a la Lancelot & Guinevere or Romeo & Juliet. That’s precisely because:

‘these violent delights have violent ends‘

Each of these love affairs brings with them a breakdown of social order or the status quo. For some the “drama” of the relationship between Anakin and Padmé felt over the top, but that dramatic quality actively hearkens back to these kinds of stories and tales, hence why I’m basing this post on the most famous romance of the Arthuriana.

ow, in the case of Anakin there is a strange combination of similarities between him and King Arthur. On the one hand we have this young boy who is raised as a nobody before he is discovered by a man with seemingly magical powers who raises him up as the chosen one who will bring peace and balance to his new empire. And then there is Anakin on the other hand. I doubt I have to explain those initial, bare-boned comparisons there between Arthur and Anakin. Both have a destiny which is laid out before them and both have little to no choice as to how this destiny will play out. However, for many of the tales in the Arthuriana, it is clear that although Arthur will succeed in creating a peaceful empire, there will be disaster at the end of it. Anakin’s destiny is much more vague. He is the Chosen One, the one who will bring balance to the Force, although no one is quite sure why and how. Although I’d like to discuss the similarities between the Jedi Council and the Knights of the Round Table in more detail in a different post, it is enough for now to consider the similarities between the two. But where in the Arthuriana the Knights of the Round Table actively prevent King Arthur from endangering himself in physical combat, something that has made many readers see him as a rather passive king, the Jedi Council keeps Anakin away from the decision =making process, actively keeping their Chosen One in the dark. And then, of course, there is that one big thorn in the side of every King Arthur-fan, and that is his willing blindness to the affair between Guinevere and Lancelor. Both King Arthur and Anakin, then, are in a position where their destiny is spurring them onwards but their environment is not necessarily the most supportive one.
Where the comparison between the Arthuriana and the Prequels gets really interesting is in realizing that Anakin isn’t just similar to King Arthur but also bears a strong resemblance to Lancelot. Now, what is crucial 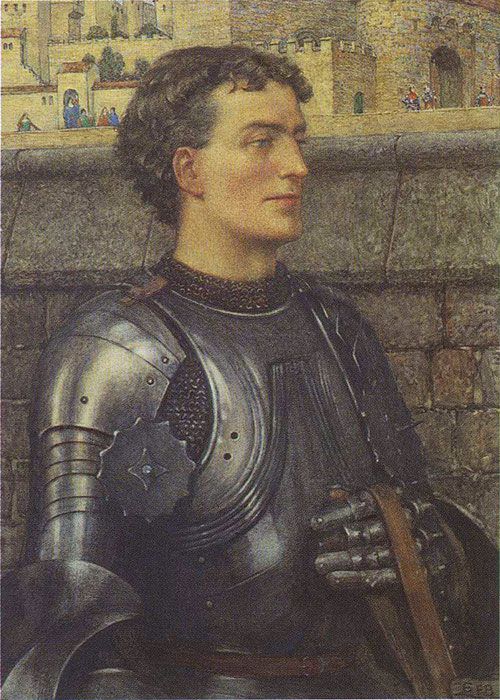 to the comparisons to Lancelot is that both he and Anakin are knights who continuously try to be good and fail. Lancelot is the best knight at court, he outshines all the others in his strength and is King Arthur’s right hand man. His one failing, however, is when he falls in love with Guinevere, Arthur’s queen. I think the similarities to Anakin here are quite obvious, but the idea that this paragon of knighthood is brought low by illicit love runs through Anakin’s story. He has the potential of being one of the best Jedi to have ever lived with incredibly powers, but by falling in love with Padmé Amidala, herself a queen at the time, seemingly dooms him from the beginning. Both Lancelot and Anakin are torn between their duties to their orders and their hearts. In the case of Lancelot this leads to him “failing” at the Grail quest. He is only allowed a glimpse of this holy object while his son Galahad, pure of any earthly attachment, is taken to Heaven by angels. Lancelot, meanwhile, dies while in penitence after his affair with Guinevere sparks a war in which Mordred takes advantage and kills King Arthur. Similarly, Anakin’s marriage to Padmé keeps him torn between his duties and eventually makes it impossible for him to be a “perfect” Jedi. Sidious, who figures as a kind of Mordred-figure here, takes advantages of this affair and manipulates Anakin into joining him against the Jedi. It wouldn’t necessarily be a stretch to say that Anakin spends the rest of his life as Darth Vader in penitence for his crimes.

both King Arthur and Lancelot, the figure of Anakin is one continuously torn between different duties and roles. Lancelot’s eventual betrayal of King Arthur and his indirect involvement in the latter’s death, returns in Star Wars when Obi-Wan tells Luke that ‘Darth Vader betrayed and murdered your father’ in A New Hope. Although this is partially Obi-Wan trying to convince Luke to join him, it is also an echo to the Arthuriana and how Darth Vader, the darker side of the Lancelot-character perhaps, does, in a way, kill Anakin, as representative of King Arthur, the side of Anakin that presents following your destiny. And what of the third character in this triangle, Guinevere?

Guinevere stands in a strange relationship to both Lancelot and King Arthur, especially in popular culture. On the one hand she is the woman who is separated from her lover, and as such a victim. On the other hand she is seen as equally criminal as Lancelot, if not more so due to society’s gender views. Guinevere enters the Arthuriana early on when a young King Arthur falls spontaneously in love with her despite Merlin’s severest warnings it’ll do him no good to marry her. Arthur goes against this and marries her nonetheless. By all standards she is a good queen, except for her one flaw: her love for Lancelot. Torn between her duties to her husband and country on one side and her

feelings for Lancelot on the other, Guinevere becomes a divided character. You find this in her appearances throughout the Arthuriana, where she often either figures as Arthur’s queen or as a reason for Lancelot’s madness and conflict. These two sides of her story are difficult to unite and we find a similar tearing in the story of Padmé. Although the initial meeting between Anakin and Padmé isn’t accompanied by a similar warning as Arthur’s with Guinevere, there is a strong sense of foreboding form Obi-Wan Kenobi in Attack of the Clones. From the start of the Prequel-trilogy Padmé is set up as a political agent, first as a Queen and then as a Senator. She has a role to fulfil and is, to borrow an expression, married to her job. She sees herself as having a duty to her people and to her planet and for half the Prequel-trilogy that remains her main motivator. A spanner is thrown in the work here when Anakin re-enters her life.

Just like Lancelot, Anakin is this paragon of knighthood and bound to protecting the same system that Padmé has devoted herself to. Their love, however, is an illicit one, expressly forbidden by his position as a Jedi and perhaps socially frowned upon in Padmé’s case. Both Anakin and Padmé are torn between their different duties and in the end this becomes part of tearing apart of the Republic. Anakin, as a combination of the King Arthur and Lancelot figure, strays from the “pure” path, a fact of which Sidious makes use to bring down the Jedi Order. Padmé, as a reflection of the Guinevere character, is torn between her duties as a political and public figure, and her personal and emotional side. What is crucial to both stories, however, is that both these actions and social breakdowns were, in some way, predicted and fated.

Overall, then, what the links between Star Wars and the Arthuriana reveal most is the major role that destiny plays in these types of stories. It’s all very Greek, one wants to say. Your destiny, once laid out for you, is almost impossible to escape and even when you still try, you inevitably end up where you were meant to be. In the case of King Arthur, Lancelot Guinevere, Anakin and Padmé this is in disaster. They are all trapped in a downward spiral which signals the end of a time and the roles they play therein have hardly been chosen by themselves and yet they become emblematic for them. These comparisons are just another example of the close attention George Lucas paid to the construction of mythology and legend, which is one of the reasons why Star Wars continues to have such an impact.

3 thoughts on “Star Wars Meets the Arthuriana: Anakin and Padme”