Let me start this post by saying that this was my personal favourite and most emotional episode of both seasons so far! Of course the following post will contain spoilers so if you haven’t watched the episode yet please do before reading this! The makers of Rebels truly stepped up their game in this episode, so let’s review what made it all work so well.

The previous episode ended with a cliff-hanger as we found out Agent Kallus knew of the whereabouts of the Rebels and their growing alliance with the remaining clones; Rex, Wolffe and Gregor. Relics of the Old Republic really showed that not only the clones and Rebels had really bonded but also the Rebels pack has become much closer. Zeb seems to have formed a brother like relationship with the clones as he seems worried when the clones decide to go out into the sandstorm, knowing there is a high chance they won’t come out of the attack alive. While planning the counter attack on Kallus, Rex mentions he’ll always “stand behind my general” while looking at Kanan, this showed a real progression of trust in the relationship between the two groups. It also showed a growth in Kanan’s character between the two seasons, reflecting the impact of the training of Ezra on Kanan as he settles more into the role of leader/master. Rex hands his helmet to Ezra before he steps out into the storm showing a real growth of respect towards one another on both fronts. This is a very significant move on Rex’s part as we know the clones have difficulty trusting any Jedi after order 66 and therefore shows a real forming of a friendship between the clones and the rebels. 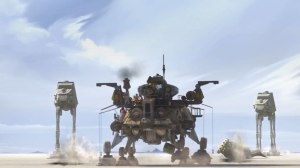 The episode continues to show some great animation during the attack on the AT-ATs. It was a very clever sequence as it was always moving and very entertaining to see the AT-AT’s in a completely different environment than what we were used to from the originals. It managed to show some beautiful scenery, clever tactics from the clones and beautiful moments between Kanan and Ezra. They both use the force to shoot the AT-AT’s as due to the sandstorm they are unable to actually see the machines. This really showed how much Ezra has grown due to Kanan’s training both in the use of The Force and as a leader. In earlier episodes in the previous season both Ezra and Kanan seemed to have much less confidence in their abilities but this seems to have been completely wiped away. Both really work as master and padawan together which reminded me a lot of the relationship between Obi-Wan and Qui-Gon Jinn in the Phantom Menace. The scene was beautifully accompanied by another amazing soundtrack created by Kevin Kiner. The entire episode has beautiful music throughout which is cleverly edited into all scenes. I personally believe there has been a great improvement in the editing of the music and the composition of original soundtrack this season which is really adding more and more to each episode. One of the more emotional moments in the episode was when Kanan, Ezra and Zeb decide to safe the clones, as they realize how much of a connection Ashoka seemed to have with them and they jump onto the AT-AT. Rex looks up and says “just like the olden days”. This particularly caught my eye as it reflects the unity of the rebels. The fact the clones recognize them as a unified team and therefore are willing to follow them really says a lot about how far the team has come since the first episode. The clones have been on their own since order 66 and never trusted anyone else enough to follow them and so the recognition of Kanan as their leader really emphasises a massive change in character (for Kanan) and the power the team seems to have.

The most emotional moment of the entire episode for I think everyone was the reunion between Rex and Ashoka. They meet in a beautiful embrace and Rex says; “You got old”. This brought forward a lot of emotions as in the clone wars we really saw the two bond and I can only imagine how much they must’ve missed eachother in the last few years. It also brings forward a lot more questions that need answering; Where were both of them during Order 66 and how did Ashoka know Rex and a few other clones had survived? It also makes me wonder how their relationship will progress and how they will help eachother when Ashoka finds out more about Anakin/Darth Vader and whether Rex already knows that Anakin is Darth Vader which to me seems hinted in this and the previous episode.

And finally we meet the new inquisitor (the fifth brother) who really seems to have no compassion for anyone and be more harsh than his predecessor. I wonder how he will handle the Rebels/Clones and whether he will last longer than the previous inquisitor. So what did you guys think of the episode? Anyone else tear up as much as I did? I honestly couldn’t hold back the tears with this one!

One thought on “Review: Star Wars Rebels – ‘Relics of the Old Republic’”