The final chapter of Luke Skywalker’s arc strongly resonates with that of Frodo Baggins. Once you uncover that, the mirroring seemingly extends much further and gives us an interesting tale of heroic failures.

Frodo’s Failure at the Crack of Doom

There can be no doubt that Frodo is the central heroic character of the Lord of the Rings film trilogy. 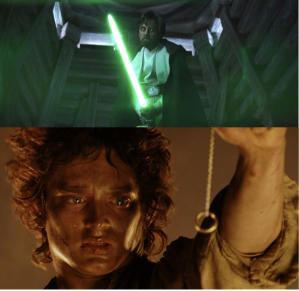 One place where the films have stayed relatively close to the book is in the pivotal scene where Frodo is about to throw the Ring of Power into the fiery chasm of Mount Doom. Frodo’s entire journey until that point was about enduring and resisting the corrupting power of the One Ring. It is important to realise that this is the whole point of the journey. It wasn’t about taking the shortest or most efficient route but about being on that journey and being exposed to the Ring. Where all others in the tale barely manage being with the ring for a few minutes without being corrupted, Frodo carries it for months. The traditional heroic ending would have been: Frodo dumps it into the fire pit and thus proves beyond all doubt only he could accomplish this task: Hero’s Journey completed. Yet that is not what happens.

At the supreme moment, the hero, the carrier of hope for all Middle Earth succumbs to the power of the One Ring. We find out our good and brave Frodo fails at the one task he had. And to add injury to insult it turns out to be one of the villains who completes Frodo’s task: Gollum! However there is a deep connection between Frodo and Gollum. 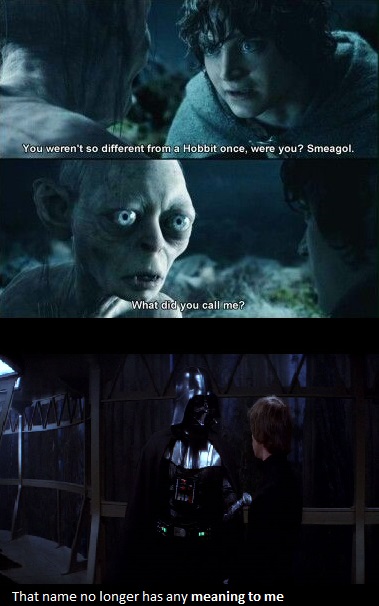 In one of the most beautiful moments in the trilogy Frodo names Gollum by name, Sméagol, who replies shaken to the core “My name …”. For us as viewers one thing immediately becomes clear at that point: there is perhaps a chance for redemption for Gollum! The recognition of his name shows us that maybe he can return to who he once was.

This might call back a memory of another scene into your mind: when Luke confronts Vader on Endor’s Sanctuary Moon. But Vader’s response is “that name no longer has any meaning for me”. Vader seems far beyond any redemption. But this echo is fascinating: because just like Frodo fears that Gollum is his own future if the Ring gains a hold over him, so does Luke worry that Darth Vader is his future if he cannot resist the pull of the Dark. It is the vision from Dagobah in Empire Strikes Back that troubles him and brings him to seek Vader’s redemption.

But of course Vader is no Gollum, right!? Of course not, they are very different characters and play very different parts. Well, they do share one other feature. The only reason why Gollum is part of Frodo’s life, for better or for worse, is because Frodo’s resourceful uncle Bilbo Baggins showed Gollum mercy when he recognised a degree of humanity in Gollum’s grief over having lost the One Ring.

Strange then, isn’t it, that the only reason that Anakin Skywalker is part of Luke’s life, for better or for worse, is because Anakin was shown mercy, i.e. was not killed, by “Uncle Ben”. As Yoda would perhaps have said it: “The fate of many, the pity of Obi Wan may rule”.

Bilbo and Obi Wan both appear as “uncles” to the main heroic character. Both have committed a deed in their past which places an evil character on the path of our protagonist. An evil character which our hero recognizes as kin and who will become a subject of a deep hope for redemption. If the evil character can be turned from evil and darkness to light, then what a heroic accomplishment and what hope is there for our hero and for us.

In fact the resourceful uncle does even more for our hero. Not only is he the direct cause for the obstacle on the hero’s path 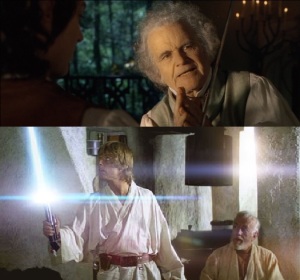 , but equally does he provide the hero with a vital piece of equipment. Bilbo provides Frodo with “Sting”, his sword, and with a mithril shirt. Both objects which can protect Frodo as well as attract unwanted attention. Of course it is also Bilbo who passes the One Ring to Frodo. Ben Kenobi gives Luke the lightsaber once held by Anakin. Both ‘uncles’ are there only for the first leg of the journey of our hero. Both hero’s soon find out that their adventures are nothing like the adventures of their beloved ‘uncles’. Adventures that had meant that both uncles were regarded as “crazy” by the people around them.

The adventure that wounds

The reason why the adventures of Frodo and Luke are so different from those of Bilbo and Obi Wan, is because the possession of the One Ring and being the offspring of Darth Vader are meddling with their deepest emotions and values. Both are drawn towards the dark by a burden that was put upon them by circumstance … and in a very direct manner by their uncles. It wounds both Luke as well as Frodo and after their adventure seems to have come to a close both feel the need to withdraw. 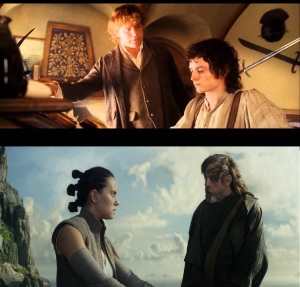 They simply do not feel they can fit back into the world.

When Rey meets Luke on Ach-Too, Luke has withdrawn from the Galaxy and yet is unable to leave. When Frodo returns to the Shire he feels that for him things will never return to normal. But there is something he needs to do: write down his adventures. So at the end of the Lord of the Rings trilogy we see Frodo hand-over to Samwise. Next for Frodo is a journey to the undying lands. The hero who failed receives the last and perhaps greatest honour.

All that has happened since they were first swept up into their own adventures has left deep scars on both. 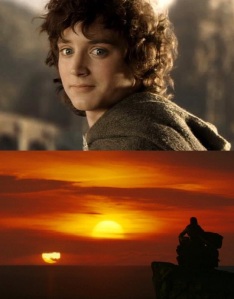 And although we as viewers can be sad to see them go, there is also a sense of liberation and determination in their departure. These heroes are broken heroes until they find the strength to finish their story and leave this world to their successors and heirs.

Mercy is the truly heroic act

So let us recap: Frodo and Luke are both in the situation they are in because of an uncle who had pity, or showed mercy, to what turned out to be a villain. That villain is now standing in their way both as a personal threat that makes them despair about their own condition as well as a threat to the world they live in. Gollum and Vader are not the ultimate evil but they play their roles as the facilitators of that ultimate evil. They are drunk on it, addicted, and represent each and every human being that can succumb to the temptation of that evil. Dealing with the ring has disfigured Gollum as much as it has disfigured Anakin. It drove Gollum to fratricide and to losing his name, Anakin to infanticide and equally to losing himself. They both represent characters who fell into darkness and who were awarded an unexpected, undeserved and perhaps even unintentional second chance by our heroes’ “uncles”.

Frodo also shows Gollum mercy the moment he confronts Gollum with his name. Similarly Luke confronts Vader expressing his hope that there is still good in him. Where Gollum initially seems to bend towards redemption, Vader rejects the idea.

The Crack of Doom

Frodo’s final test comes when he stands at the Crack of Doom. He spectacularly fails the test and all hope for the cause of good seems to evaporate … when Gollum re-appears and does what the unredeemed Gollum always does: he goes for the Ring. The message is clear: “good” alone cannot defeat evil, but evil can destroy itself when good people act with mercy. The ring in a way destroys itself due to the strength of its corrupting power. Luke has shown Vader mercy in the battle above Endor on the second Death Star. In a way the Sith destroy themselves and much like the paradoxical act of Gollum that saves Middle Earth, the last murderous act of Darth Vader saves the Galaxy.

Now most of us, myself included, will probably look upon Luke’s temptation by the Emperor as Luke’s ultimate test. But what if his experience at the hands of Palpatine on the second Death Star was not Luke’s crack of Doom moment? When Frodo is at the Crack of Doom the entire string of conflicts on Middle Earth focus in that moment of Frodo: the battle to save his world as well as the internal battle to remain his kind and good-hearted self. Frodo fails on both counts and is a broken individual afterwards.

For Luke the stakes on the Death Star are not that high. Sure the Galaxy may seem at stake, but he himself has found his role and has confidence in his abilities. He walks a fine dark-side line in his duel with Vader but never strays from the light. He shows his father mercy and his father commits a last act that finishes off the resident evil. But Luke’s core mission is a different one. As the last of the Jedi he must pass on what he has learned. Luke’s journey was necessary to bring him to that point where he could teach and pass on. That is Luke’s Crack of Doom moment, with Ben Solo in his training Temple … and like Frodo before him: he too fails. Where Frodo remains wounded for the rest of his time on Middle Earth until he retreats unto the Undying Lands, Luke finds a way back to handing over … handing over to Rey.

I think it was interesting to explore some of the connections between these characters and the story-beats they go through. But I believe the main thematic resonance between these arcs and stories is this: the force of mercy vs the fallible human hero. The important moments in Lord of the Rings are “the small acts of mercy that keep evil at bay” and not the huge battles. That holds true in Star Wars too! It will be thrilling to see whether the writers of The Rise of Skywalker have also considered that.