It is one of the most iconic scenes of Return of the Jedi that seems to be there for comic relief only. But let’s take a closer look! Like so many other brief moments in Star Wars, the scene too deeply connects to the main themes of the Saga.

When Luke Skywalker falls down the pit into the Rancor’s lair under Jabba the Hutt’s palace we already know that a terror awaits him there. After all, just minutes earlier we have seen Oola suffer a similar horrible fate. After her death, which is so filled with symbolism of the vileness of Jabba, we now get to see Luke in the same situation. It gives Luke a chance to avenge her death on her behalf. So naturally, by placing this scene here in the storyline George Lucas makes it nearly impossible for us to see the resulting fight as well as its conclusion as an act of justice meted out against the rancor. But what follows next is a stunning scene.

Lucas spends close to 20 seconds of footage to introduce to us Malakili, the beast-master who trained and cared for the Rancor and shows him in a state of grief.

The other face of oppression

excitement of the fight between Luke and the Rancor. And indeed this is one way in which you can view it: the preposterous love of a weird man for a monster which has just attempted to kill the hero. But if Lucas would only have been after the comedy of the shot, then he could also have showed a greedy trainer who is now upset at his prize-monster being dead, his investment of a lifetime (perhaps) being sunk. An angry Malakili with fancy clothes on would probably have been just as in-your-face and just as ‘funny’. Interestingly that is not the choice Lucas makes.

In fact, almost as if to emphasize that this is not just about poking fun at Jabba’s minions, Lucas chooses to double down on the sadness of Malakili. Not only do we hear him audibly crying, but we see one of his mates put an arm around him. It is hard to overestimate the importance of this little gesture. It tells us so much about Malakili in a mere few seconds of screen time. Not only did Malakili deeply care about his Rancor but apparently this was also a caring that his fellow ‘minions’ of Jabba’s underground are aware of. This simple fact immediately signifies to us that Malakili also has a caring relationship with his fellow servants of the Slug. They care about his sadness and evidently he had been able to communicate, in the past, to them his caring about his creatures and monsters.

What Lucas does here, in an example of efficient and splendid writing, is show us the other face of oppression. 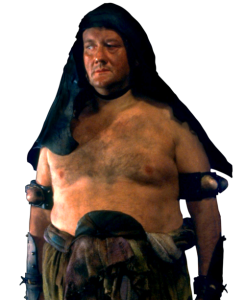 Where first we saw Oola as a victim becoming prey of the Rancor and then we saw Luke facing this monster in its role as an executioner of Jabba’s prisoners, we now recognize in the face of Malakili that the Rancor itself is also a victim of the same oppression and abuse that killed Oola and holds Luke hostage. Through the tears of Malakili and the embrace by his fellow servant this extends to him and other servants of Jabba. The shot reminds us that they too are in this situation not neccesarilly of their own volition, that Jabba plays with their lives as if it were meaningless toys too.

Showing Malakili’s grief and his colleague’s gesture of empathy immediately humanizes these characters for us. In a brief moment we realise that Luke’s killing the Rancor was not a case of meting out justice, but rather created two more hurt victims of one and the same oppression. This is ultimately what abuse and oppression do to us: they make us victimize each other for the benefit or entertainment of the oppressor. Killing the monster is not justice for even the monster has someone who loves him. It foreshadows the lesson Luke memorizes just at the last moment in his climatic duel with Darth Vader at the end of Return of the Jedi.

Interestingly this is not where the foreshadowing stops, nor where the parallels with the core messages of the Skywalker Saga end. When we see Malakili’s response to the loss of his Rancor this reminds us that it is Jabba who is the cause of all this misery. Luke’s heroic act against the Rancor was not his vengeance to exact on Jabba. By the end of this first-third of the Return of the Jedi we will see a family member of Luke do so, one who is suffering the same fate as Oola at the hands of Jabba: Leia. Similarly when the film ends it is again not Luke who brings the Emperor to justice, but again a family member, Anakin, who was equally enchained and enslaved to Palpatine.

The rich content of Star Wars creates so many layers of context that even a seemingly short and meaningless scene like Malakili’s response to the demise of his creature echoes al the things that these trilogies try to speak about. No wonder that Star Wars fans enjoy digging deeper into such side characters and giving them more of a back story.

This fan-film of 2019 is a good example. It explores how abuse can be incredibly difficult to escape from and how dependence on ill-willed people can keep us in servitude beyond our own ability to escape.

The word “rancor” refers in English to a deep, twisted and “rotten” version of anger and ill-will. That Luke defeats this Rancor therefor again has a double connotation. It is the deep-seated anger in his father that he needs to defeat. 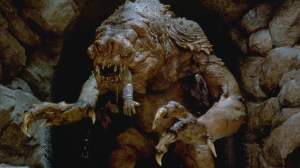 But the loss of this anger does not necessarily come with a great sensation of victory or liberation. The older you grow, the more you realise how people can hold on dearly to their angers and grievances. If someone comes along and takes them away, one response can be to get even angrier and more ill-willed. Malakili shows us yet again that sadness is an alternative response. The arm around his shoulder symbolizes that he needs to let go.

After losing his rancor, and after Jabba’s demise, Malakili faces a rough time. Rancor can give one’s life a toxic meaning that is not easily replaced by something more benign. It might make you smile to learn that Malakili ends up running the Crystal Moon Restaurant in Mos Eisley together with the former head-chef from Jabba’s palace. Malakili needed to let go of his rancor, despite the grief it brought him. Although Luke’s killing of the creature in no way represents justice, it does represent an act of liberation. Malakili’s tears shed over the Rancor underlined the implicit recognition of that.

If you want to read more “Scene It?” just click here.

One thought on “Scene it? The tears of a beast-master”