In our series Star Wars’ Forgotten Women we put a spotlight on female characters that have an interesting and worthwhile story-arc and part in Star Wars. This 8th instalment is about a character we first get to know as a young girl during The Clone Wars and later as an adult woman during the start of the Rebellion: Numa!

Numa as a child

During The Clone Wars, Numa is a little Twi’lek girl and her people suffer a lot under the attacks from the Confederacy of Independent States who are reluctant to let Ryloth, her home world, steer its own neutral course. Being drawn into the galactic conflict exacts a deadly toll on the Rylothians which is illustrated in a number of episode of The Clone Wars across several seasons.

We encounter Numa in season 1, episode 20, The Innocents of Ryloth, where she is still a

little child. She is lost contact with her family and her way home during the fighting and her path crosses that of two Clone Troopers, Waxer and Boil. They share some of their food with the starving little girl and soon a relationship develops between the two soldiers and the little girl. But it very quickly becomes clear Numa is more than just a little girl. 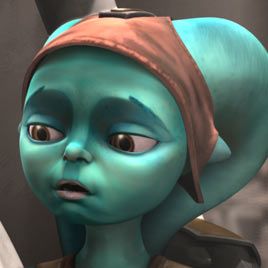 manage to communicate and she warns them for dangerous predators while they trek through the war-torn landscape together. She starts referring to the Clones as “Nerra” of which Waxer and Boil only later learn that she calls them “brothers” in her own language. The traumatic background of Numa becomes clear to Waxer and Boil when they find her destroyed home, where Boil finds her doll and gives it to her.

The episode highlights the human side of the Clones, but also the inhumane side of the Clone Wars. But in addition to that Numa despite her young age is shown to possess agency and skills the Clones have to rely on for their survival. A mutual respect grows which Numa is the first to express by calling them “brothers”. As a traumatized and orphaned young girl Numa shows remarkable strength not only as a survivor of the conflict, but within that she retains her ability to connect to others and build bridges.

Numa as an adult

We encounter Numa again as an adult young woman, many years later, in Season 2 of Star Wars: Rebels. The Empire has been equally unkind to Ryloth. Ryloth’s resistance leader against the CIS during the Clone Wars, Cham Syndulla, is now leading a rebel-cell on Ryloth. Due to the family connection between Cham and his daughter Hera Syndulla, pilot of the Ghost, she and her friends of the Ghost-crew get pulled into the Rylothian troubles.

Again Numa plays a significant role in bridging the chasm that divides two sides, this time Hera and her father.

As a young adult woman Numa is still every bit as feisty and dangerous as she was as that childlike survivor during the Clone Wars. Her hard life so full of conflict has made her a skilled soldier, but she never loses the ability to make her own decisions. When the moment comes that she draws the conclusion Cham Syndulla is on the wrong side of the conflict, she resolutely makes her choice just like she did so many years ago as a kid.

Numa is one of those great Star Wars side-characters that, through their actions, facial 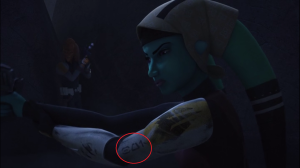 expressions and agency, reveal there is most likely a long, complicated and messy backstory connected to them. The fact that decades later Numa still carries Boil’s name in aurebesh on her armor says so much about her sense of loyalty and about how deeply she means it when she call you her “brother”.

Our Star Wars galaxy is populated with main characters that have equally complicated, messy and ambiguous stories such as Anakin, Ahsoka, Hera and Kanan, Ben Solo and Rey, or Kazuda Xiono. But side-characters like Numa show us that this is true for all the people in this galaxy, only for most their story never reaches the forefront of the narratives that make it unto film or animation show. But like Saw Gererra in Rogue One, such characters can sometimes suddenly find themselves in the center of attention. I hope one day we will also see a little more of Numa!