Yes, you are reading this correctly! Although there have been a gazillion reviews and commentaries on the teaser trailer of The Rise of Skywalker I think we found something no one else spotted. Wanna know? Read this brief post that might contain spoilerish speculation about what it means!

References to the past

The teaser-trailer to The Rise of Skywalker is filled to the brim with call-backs to the previous Star Wars episodes. There was the title-card taken directly from the Episode I teaser trailer, Lando’s Millenium Falcon shot very reminiscent of an Episode VI shot, the Death Star remnant shot, Finn and Poe standing on a skiff reminiscent of the ones we saw on Tatooine in Episode VI, etc.  Seen in this light the inclusion of the Emperor’s laugh at the end does not need to signify Palpatine is coming back, but could be a further element to tell us that all of the preceding story is materially relevant for this closing chapter.

All of the elements above have been noticed by people before and analysed to death. However most analysis of the teaser-trailer are so focussed on a possible return of Palpatine that they seem to forget the possibility that such a ‘return’ could perhaps only happen in terms of flashback or recollections of past events. The following two screen grabs contain an interesting clue which I have not seen discussed elsewhere. At 1m31s into the teaser-trailer we can see the following shot

Now you might immediately have recognized the familiar shape of the A-wing which featured in cinematic Star Wars after the Battle of Yavin in Empire Strikes Back and Return of the Jedi. The Last Jedi also featured further developments of the A-Wing whilst The Force Awakens had restricted the Resistance’s fighter fleet to X-wings only. 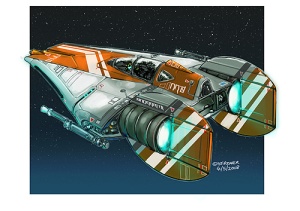 see silhouettes of further ships. Apparently this A-wing in the foreground, whose second engine will turn out to be on fire in the next frame, is engaged in a space battle of quite a significant size. There is however reason to believe that we are not dealing here with a Rebel-era A-wing and definitely not with a Resistance-era version. Rather its appearance is much closer to the Republic Era R22-fighter used in The Clone Wars. A second frame namely reveals a rather stunning object in the background of this short sequence of the teaser trailer. A fraction of a second after the shot above

we see our R22-fighter spin and tumble past a capital ship that bears all the hallmarks  of a Republic attack cruiser of the kind we also see in the opening shots of Revenge of the Sith. Note how in that shot below,

which immediately follows the camera pan in the Revenge of the Sith opening, the bright ‘Sun’ over Coruscant is creating a very similar atmosphere to the teaser-trailer shot. The color-scjeme of the capital ship can be seen a little better in the last shot which is already in the fade-in of the next teaser-trailer shot.

Here the Republic red-white colour scheme is unmistakingly clear. We also see a few more silhouettes of other fighters in the background.

What does this shot reveal?

My interpretation of these shots is that we are actually looking at a space battle that occurs during the Clone Wars era, that these are actual Republic-era attack cruisers and R22 A-wings. The lighting of the whole even suggests that this might be the Battle over Coruscant with which Revenge of the Sith opens. But even if that is not the case: this is clearly a shot that does not come from the Sequel era! One revelation here is thus that The Rise of Skywalker will contain flashbacks to the Prequel Era!

Of course it might be that this shot never makes it into the actual cut we are going to see in theatres in December. But it does provide support for the idea that Palpatine’s return might very well be in the form of Prequel Era flashbacks or recollections of Prequel Era events by characters involving things we haven’t seen on screen before. That however opens up a broad avenue for including significant portions of Anakin’s path into The Rise of Skywalker. They obviously have been creating new footage from that era from which this teaser-trailer shot is perhaps a part they will not use in the actual film. But it is hard to believe that they would only create this footage for the teaser.

Finally, what could be the reason to do this? Well, when you think f it there would be plenty of reasons to revisit the Prequel Era timeline in a film that wraps up the whole saga. I have always had this idea that there might be an emphasis on artifacts in The Rise of Skywalker, and someone interested in the remains of Luke’s hand & sabre might also fancy Dooku’s sabers that we left somewhere aboard Grievous’ ship. For what it’s worth, a collector of such artifacts might even be interested in parts of Grievous.

But most importantly the Saga cannot be brought to an overarching conclusion without returning in some form to Anakin Skywalker. The Sequel Trilogy cannot be brought to a close by bringing in Anakin as a character with real agency at this late stage while somehow keeping the lid on this. But what is possible is to bring in Anakin, his actions and their consequences, from the Prequel Era. And I think these few frames tucked away in an image-fade in the teaser-trailer support the view that there is going to be real flashback material to the timeline of Episodes I-III.