“Power” is one of the most frequently heard words in the Star Wars stories. Anakin’s story sends a chilling warning to all who glorify the acquisition of power.

Jedi and Sith can be found quibbling about which side of the force is more powerful. Palpatine can be seen relishing in “unlimited power” in an uncanny moment where the limitations of his powers are in a subtle way more evident than at any earlier or later moment. 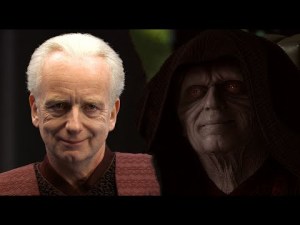 Anakin seeks to prevent the ones he cares about from dying and comes to the conclusion that what leads there is … more power. Almost all Star Wars stories contain a visual discourse about the true nature of power … and unerringly it ends up saying what almost no one wants to hear.

Such a quiet thing to fall

A recent YouTube video by DuDuFilm picks up this thread of Star Wars narratives in an interesting way. After opening with Kreia’s quote that it is “such a quiet thing to fall” the video (below) initially seems to glorify the nature of power celebrated by the Sith, including in the Sith Code.

What the sequence of visuals and quotes makes clear is just how much of Star Wars debates this idea of power as the ability of bending people and fate to your personal will. This of course is the very root of the Sith conception of power: it amplifies your will’s ability to shape the lives of others according to your own needs and as a result it amplifies your ability to shape your own life: “through victory my chains are broken”. But that is followed by Kreia’s voice and the ice cold statement that “then … you are broken”.

Kreia and the nature of the Force

Kreia is one of the most chilling and challenging characters in Star Wars. Having been both Jedi and Sith she ends up being neither. Having one time sought to submit herself to the will of the Force, another time sought to dominate the Force for her own ends, she finally arrives at open hostility towards the Force for its characteristic of seemingly dominating ‘us’.

The ‘debate’ between Sith and Jedi revolves around this tension. In the Prequel Trilogy we meet a Jedi Order who slide into darkness whilst they slowly

learn that it is not the case that “the dark side diminishes their ability to use the Force” but rather than the Force seems to actively work to displace them. However similarly the Sith surrender to the delusion that the Force is theirs to use and fail to recognise that they too to a significant extent are being used.

It is exactly this impression that Kreia ultimately finds so abhorrent: a universe governed by a soulless Force that pitches beings against beings in an eternal struggle for balance. She rejects this Force and rejects this power. Or as she puts it: “the true lesson of strength is to turn away from strength that is not your own”. Yet Kreia herself falls into her own sword as ultimately she seeks to rely on the strength of ‘the exile’ in order to achieve her aim of destroying the Force.

In the story of Anakin Skywalker we see this play out in a subtly different way. Here to the Star Wars narrative does not hesitate to show us the paradoxes of power yet in a subtle way. Let me give you some examples:

In each of these examples the supposed power comes with a loss of control. The root is typically the same in each case: this idea that power represents the ability to shape the decisions and actions of others to thus further your control over your own life. Or as Anakin puts it to Padme: “we can make this galaxy the way we want it to be”. Of course we know nothing of that kind lies in Anakin’s future.

The tragedy of the Sith is that their core belief of accumulating power as a path to individual freedom is a lie. 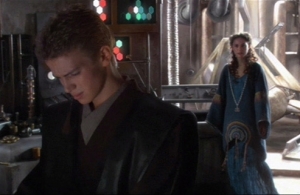 Darth Plagueis finds the power to ‘create life‘ but only to have it lead to his own death. The only one who actually create life in Revenge of the Sith are Padme and Anakin … but they too meet their untimely ends due to Anakin’s urge to control life and death and his inability to let life shapes his life. That is an ability he only recognizes all the way at the end … on the second Death Star. It is there that he recognizes his liberation from his chains does not reside in his control and power to break them but in his ability to let the life he and Padme put into the Galaxy shape Anakin’s final moments.

When your chains are broken, so are you

In Star Wars the galactic Empire represents an attempt at control that sucks the life out of the galaxy and it ends up defeated by the Ewoks as representatives of innocent yet ‘wild’ life. Anakin’s personal quest for control of the lives around him ends in him losing himself.

He can only retrieve himself by a last-moment willingness to surrender control. Yoda’s reliance of disengagement and balance as a source of influence runs aground in the midst of the fog of the Clone Wars and even in the Original Trilogy he struggles to advise Luke in the right direction. In the Sequel Trilogy we see Luke himself imprisoning himself on a deserted island in the hope of being free from what he feels to be his responsibility to engage and physically and decisively fix things. It is only when he decides to re-engage but by giving up the option of engaging physically and decisively that he is able to generate the inspirational power that does just that.

The thirst of the Sith to break their chains, does not grant them victory but breaks them.

The denial by the Jedi of emotion and attachment makes them lose the peace they so much wish to achieve. The error they both are wrapped up in is the belief that which ever form of power they believe in … that power will allow them to fix their own desires through control over the lives of others. Broom boy in The Last Jedi represents more than some kind of “every one can be a Jedi” idealism. Broom boy represents the power of inspiration as the only true power, a power that only becomes accessible once you realise that your chains are irrelevant as long as you inspire others.