Hey-hey! We are back here with another character study from “Solo: A Star Wars Story”! We were very excited to see the movie in different locations of our planet and are even more excited to now talk about the new characters that were brought into the Star Wars Universe and discuss our thoughts with you! This post will focus on the character of Rio Durant – the Ardennian guy who was a member of Tobias Beckett and Val crew, the pilot. He, arguably, is not one of the major characters, however, he strikes you by being an extremely positive and optimistic little guy. I guess everyone in their life might have met someone who is this type of person who takes all the difficulties with a cheer, eager to pin something down as another adventure lived. 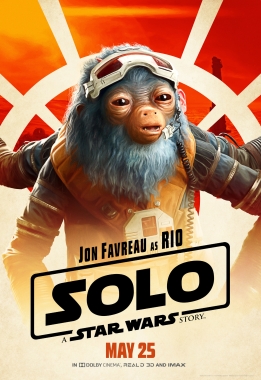 Rio came across as always being adaptable and ready to embrace new challenges and risks, take on difficult situations with a smile and with a timely joke. When sitting by the campfire he tried to convince Val to agree on taking in the guys Han and Chewie to their crew. It is his possibility to see the good in his new acquaintances and believing that they may bring something positive is what led to the circumstances fine-tuning into what we saw unfold on the screen.

And, of course, I am still smiling when remembering his Wookie jokes:

“You will never have a deeper sleep than curled up in a Wookie’s lap”.

“Have you ever tried to disinvite a Wookie to anything? Not a good idea!”

This little guy was even optimistic at the time when he was nearing his end and was willing to see the good in Han. He proclaimed that Han was ‘a hell of a pilot’, and it is in this very moment I saw that it helped not only to reaffirm Han’s goal on going back to Corellia to reunite with Qi’ra, but to encourage and pass on the strength to pursue his dream of becoming the best pilot in the Galaxy! I believe that Han learned such indispensable qualities from Rio such as being more optimistic, forward-looking, and to value friends and time. And, of course, who can forget how cute he is when eating! ^-^

When chasing the train to steal refined coaxium, Rio had shown extreme enthusiasm, practicality as well as teamwork. He was just having a great day whilst dealing with a very complex task at hand. I, personally, really liked Rio as his character closely resonated with some of the film’s main themes, such as choice and destiny, caring about the people around you, and how an individual relates to life in general. ‘It’s nothing’ – said Rio about his shoulder. It is in the last very moments of his life that we could see that he did not care about himself as much as he did care to tell Han and pass on the thought that ‘it’s no good to die alone’ to make sure Han does better than him.

“You were not lying kid, you were a hell of a pilot”.

I believe a lot of us, maybe some of us, met this kind of person in their lives at a difficult time. It’s a joy to be filled with their positivity, become more reassured and fine-tune yourself into the idea that everything will turn out fine and focus on the bigger things. I think we, too, can learn from Rio and try to be more positive and kind towards each other, and see a bit more than what merely comes by when our vision is clouded in difficult times.

We will be back very soon with other character studies, but in the meantime check out: