After a rather animated discussion on the Clone Corridor Community thread for TLJ, I was asked to write a piece on my thoughts regarding the film and it’s polarising nature coming from the POV of an EU fan. I’ll start by saying I came out of the cinema feeling odd; not unimpressed exactly, but hurt? Perhaps angry at the liberties taken, and the future taken away from certain characters. I felt like I did for a reason, and it turns out it’s harder to put into words than I thought…

(This post contains spoilers for The Last Jedi!) Like many others I grew up watching SW at the cinema, and then moved onto the books (which at the time were canon) and every other media they produced (games, the prequels, graphic novels etc.) and so by the time The Force Awakens hit, as a fandom we had close to 30 years worth of history to draw from. The future (and thanks to KOTOR, the past) had already been written and we didn’t have to be worried about our original heroes, as we knew they had gone on to live long lives full of adventure (well almost, sorry Chewie) and we could be happy they (Luke especially) went on to become the powerful figures we hoped for them.

Then came The Last Jedi

TLJ took that away in some respects, and I think that’s a problem for some and partly the reason for some of the fan backlash. Although TFA reset history it still had places for the original cast and they all appeared in positions that were to be expected, or not seemingly out of place.

Leia was, well, being Leia, Han wasn’t that too different from the one from the EU (i.e. runs away when faced with emotional turmoil only yo come back to deal with it head on given the right nudge) and far as we knew Luke, although hurt by his apparent failure with Ben was still a force to be reckoned with as per his equivalent in the EU. However at the beginning of TLJ he is a shell of what we think/believe he should be.
(As we now know, Mark Hamill himself fundamentally disagreed with what they had done to Luke, feeling he would not have stayed away and turned his back on the force like he did, so it wasn’t just some fans that had an issue with it. However he does appreciate what they are trying to do with it, and understands his place in the story).

From a certain pioint of view

When it comes to viewpoints, I think it’s important to make the distinction on the type of viewer here, as it can and will make a difference to how a person perceives this new film. On one hand of the spectrum we may have someone like me; older, well versed in SW and its lore and an avid reader of the EU. On the other end we will have people who have seen the films (maybe not even all of them) and that’s it. These people naturally have little to no preconceptions on what has happened to our heroes since ROTJ apart from their own ideas.

That’s not to say these people have any less claim to a character than others, far from it, but it may be that unbridled with additional knowledge they may have a better first impression of the film than someone like me who wanted, or felt, that some characters got the short straw when considered against their EU counterparts. This idea seemed to be vindicated after I’d spoken to several friends and family that have seen TLJ, but had only ever seen the original trilogy/prequels and really enjoyed Last Jedi. Of course there are going to be other people in this range from one end to the other that like/dislike it regardless of their knowledge of SW, but it’s a given that having a knowledge of the EU gives you a more informed idea on what you think it should be like and either consciously, or subconsciously, colours your opinion somewhat.

A lot of the more ‘out there’ things in TLJ can be easily explained away or fairly easily accepted, however some things are not easy to ignore. Of the most strange we make our way to a certain scene with Leia, which I feel must be discussed as in virtually 100% of the conversations I have with people (lovers and haters) about the film it is this one scene that seems to break the suspension of disbelief more than any other. Now affectionately dubbed the ‘Mary Poppins’ incident by the internet, it’s this I want to address directly as exhibit A with my reasons why.

When SW first exploded on our cinema screens and later on our TV’s, we saw the Force in action and began to learn what it could do, and how it works.

The prequels gave us a bit of a blip in that area, but the EU filled it all out (and a bit between the lines as well) so by the time we got to these new films we had about 30 years worth of films and books (and other media types) telling us how this stuff worked.

The Force was just that; a Force, it wasn’t sentient and couldn’t do things to people per se, rather people who were sensitive could use it, mould it to their will. (I’m going to ignore the Clone Wars episodes with the Force Children and Father for now, that’s something else entirely and requires discussion elsewhere, as well as Force ‘dreams’ which are quite common).

For most the only time the Force ever seemed to have an agenda of sorts was in the talk about balance, and SW history tend to show that opposition pops up to counter an in-balance but didn’t use direct interaction. It is here that TLJ openly appears to re-write the rule book on the Force. To be fair, it does do this to a lesser extent on TFA and in other areas of TLJ, but it is on Leia’s space walk that things get weird. 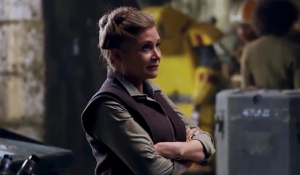 The scene plays out like she has been sucked into space and to all intents and purposes should be, and is dead. A few minutes later the Force somehow manifests itself in her of it’s own accord and allows her to return from death’s door. Now, this is something we have been told about previously but it has never been done to oneself, only to others (see Darth Plagueis).
Now, if you go with what it looks like than the Force has done this *too* her and it’s a brand new thing, never seen before that I’m aware of. Or, it could be that Leia did it herself.

Now the Director is going with the 2nd one, saying that as she has powers the Force chose that moment to manifest itself in her. That’s fine and all, but a bit of a massive assumption and I’m inclined to say no. As Han Solo himself said in TFA, ‘That’s not how the Force works’, and no-one has ever used it whilst unconscious which is what seems to occur. What would have been preferable was visual cue’s that Leia was about to do something an instant before the bridge explosion. Then it would have been easily explained as what was happening (activating a Force power) was actually by her own will, but we didn’t get that. Whatever was happening was post explosion and that gives rise to a lot of questions. Bringing something in when it’s all new is one thing, but doing it within a very well established guidebook will get you funny looks and Leia’s space scene is the one bit in the film I don’t think they adequately explain. We don’t even get one person on the ship going ‘Dude what the hell, how did you do that???’. In my mind it shows the Director’s possible ignorance or lack of respect for the lore so he can create a fancy scene just to show off Leia has the Force as well.

Perhaps it is just Rian’s film

However, after all of this we get down to the fact that it’s just a film, and they can do what they like with it and if they want to create Force powers they are allowed to do so. We have to accept that we can’t just pretend we know better and have seen everything. It hasn’t damaged the franchise (those memes though!) and some people thought it was pretty cool. If it makes anyone feel better, that scene gets less uncomfortable the more times you watch it. By my 3rd time I just sighed heavily and had a look around to see the reaction of others in the theatre.

After several viewings the parallels to TESB more readily show themselves, and as per usual we have as many new questions as we have answers.

Is Snook really dead? Who was he? Did Kylo lie about Rey’s parents knowing it was her vulnerable point just to get her to join him? Will we see Luke again in some form? We will undoubtedly get more books that help with, if not fully, explain some of the questions above (a Snoke book would be great; we had one with Plagueis and Sidious).

Rian has very cleverly made his own film whilst at the same time nodding respectively at Empire (and to a degree ROTJ) as well, before forging on it’s own path and stopping short of just copying the format of previous films, such as last stands at bases being attacked by walkers / the student abandoning the Master to save their friends etc, with the Master of the Master popping up with helpful advice after they go etc.

At the end of play we now appear to have a level playing field with our known primary Force users with Luke and Snoke gone, and the next film could go in several different directions. There are a lot of fantastic scenes and new branches to the story we didn’t quite expect from film 2 of 3, and if you tell me you didn’t get tingles when Kylo does the deed and the lightsaber flies into Rey’s hand and they go back to back, than you may actually be dead and shouldn’t be reading this 😛

To be honest before I was able to write this I *had* to go and see the film again a few times, and it’s something that I recommend to anyone who didn’t like it on their first viewing. It helps to clarify things and it helped to change my opinion of the film somewhat; I no longer feel betrayed, sidelined or disrespected. This may not work for everyone, but I think the film deserves it.

On repeated showings it starts to make sense and you pick up bits and pieces; the nods, the shy alluding to another way of doing things that this film is going for. It has an ebb, an underside that is trying to tell us about family, about trust and that nothing is every truly as it seams or is destined to be.

So we make our way back to the start of this, and my quote of a line uttered partway through the film by Luke, and it sums up the film perfectly; It doesn’t go the way we think, but after everything that might actually be a good thing.

Want to read more about The Last Jedi? Try these:

2 thoughts on “Guest-post: “This is not going to go the way you think” by David Thompson”