What better way to return to production on this blog than with a brand spanking new The Last Jedi trailer, released in the early hours of Tuesday (UK time). There is so much to unpack here and I am still amazed by it. Have a look for yourself again, because let’s face it we’ve all watched this trailer a hundred times by now, and then join me in unpacking it below.

We start with the First Order and an update on Kylo. who is standing alone on some kind of First Order ship. Then we hear Snoke, clearly talking to him and reminding him of what Snoke saw in him at the beginning.

‘When I found you I saw raw, untamed power. And beyond that, something truly special.’

As Snoke speaks we move from his ship guiding AT-ATs, to him leading troopers, to him picking up a lightsaber. Clearly this is meant to establishes him as a leader in the First Order, someone who gives commands but also someone who has therefore committed a whole range of probably atrocious acts. The only thing that felt odd here were the AT- ATs. Perhaps because their scene in The Empire Strikes Back is so iconic to me, it was weird to see them brought out again. It also confirmed to me that the First Order is basically the Empire, with hardly any distinction. So, the trailer clearly starts on Kylo, but by the end of Snoke’s little speech, we switch right to Rey and it is utterly imaginable Snoke had been talking about her rather than Kylo.

Rey still has some doubts about ‘this whole thing’, but she sia lso coming to accept that there is something ‘inside her’ and she needs ‘help’ to unlock it. In a quick training montage we see the energy and strength with which Rey fights and trains, which I have loved about Daisy Ridley’s performance from the beginning. She is a fighter and maybe a bit rough around the edges, but that gives her an edge. Also, how awesome did she look splitting the earth? I’m sure this is the same scene as in the teaser trailer where she levitates the little rocks. Well now we see that there definitely is more to it than that.

This montage also shows us that The Last Jedi will start exactly where The Force Awakens ended, which is unusual for Star Wars but makes sense here. Usually there are a few years in between the Saga installments, in which characters do their growing and developing off screen. This story clearly has an urgency and time frame to it that requires it to be basically continuous. It does make me wonder if Episode IX will also start where The Last Jedi leaves off…

Anyway, we see Luke looking shocked and alarmed at Rey splitting the earth and he follows it with the below:

‘I’ve seen this raw strength only once before. It didn’t scare me enough then, it does now.’

Please note that within the first minute of this new trailer, both Kylo and Rey have been told about their ‘raw strength’. They are clearly linked, the Force has awoken with a  vengeance in both of them and the older generation has to respond to that. But whereas Kylo is sought after, courted and seduced for this ‘raw strength’, Rey here meets with fear, rejection and perhaps even disgust, as Luke seems to be incredibly hesitant and fearful of training her. I wonder what this will mean for Rey, who has been thrown into this adventure against her will and is now left with questions Luke may be unwilling to answer. Also, will we finally know what happened to his Temple?! Will we finally get our answers about how Kylo turned dark?! 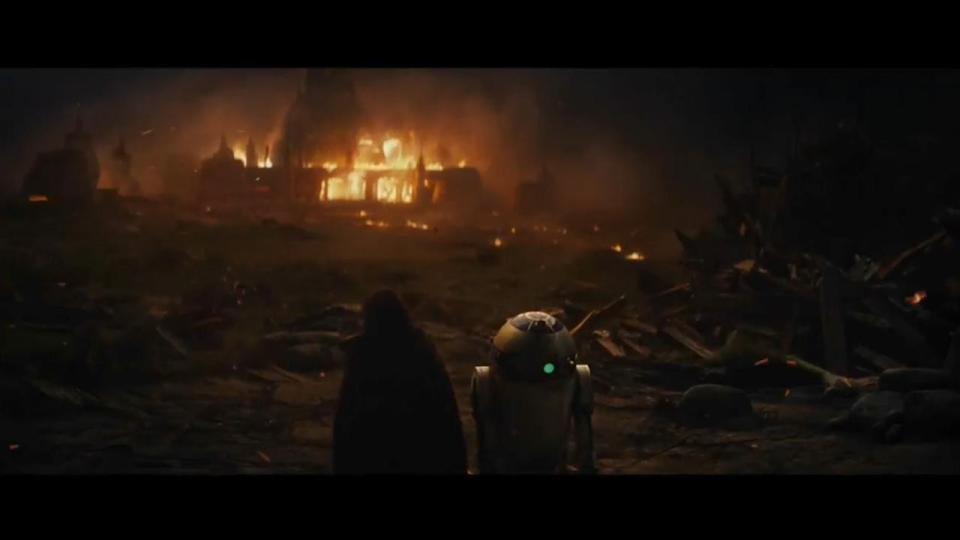 We see, what I assume to be, Luke’s metal hand emerging from a smouldering, burning building, then him sinking down next to R2-D2, observing a burning temple. This is clearly linked to what we saw in Rey’s vision in The Force Awakens and I do hope we get at least some answers since The Force Awakens was quite low on that. Anyway, I’m convinced that Rey will be majorly disappointed by and in Luke and this will leave her without any support, far away from her other friends. And on this emotional note, the trailer switches back to Kylo.

Kylo is seen considering his helmet before smashing it against the wall. Perhaps now, marked with such a visible scar, he rejects the mask to become a visible reminder to everyone that the Resistance has weaknesses? If he can switch, the son of General Leia, and if he can survive an attack from them, how much power do they really have? Also, with his father gone and his mother knowing exactly where and who he is, what does he have to hide from? Speaking of his mother, we see Kylo engaging in a space battle with the Resistance and giving us the lovely speech below:

‘Let the past die, kill it, if you have to. It’s the only way to become who you were meant to  be.’

While targeting her ship, we see him hesitating. More than we did with Han Solo, I feel. And Leia has the same distant yet focused look she has in The Empire Strikes Back when she hears Luke. She clearly knows Kylo is out there, and also seems to know his intent. The tears in her eyes are making me incredibly sad. Is this Leia’s last stand? Is Kylo going to add matricide to The Force Awakens‘s patricide?

It was incredibly emotional to see Carrie Fisher on screen again as Leia and I don’t know how I’ll feel about it if she dies in The Last Jedi. One more question, who is Kylo talking to? It sounds like a training speech, yet who could this be?

But the First Order isn’t the only one out there. We see the Millenium Falcon being chased, Chewbacca being outraged and a Porg being stressed, and then there is Poe Dameron.

‘We have a spark, that will start the fire that burns the First Order down.’

Aah, Isaacs’ Poe Dameron is still beautiful and still very determined. Just please don’t let him be that determined because Leia has died. I’m also very much looking forward to the smashdown between Finn and Captain Phasma. Finn’s freedom from the First Order means so much and to see him fight for it (and win, please) would be amazing. Also, Captain Phasma deserved better than what she got in The Force Awakens so hopefully we’ll actually get to see her be the badass she is. And BB-8 is still around as well, acting as a ship droid during the space battle in which Kylo aims for Leia.

Back to Luke, still being very pessimistic about this whole operation:

‘This is not going to go the way you think.’

Crouching wetly on a rock, this is back during Rey’s training. Intercut with Leia closing off hangar doors in a place that looks very similar to where the AT-AT attack happens. She herself also doesn’t look very hopeful, but rather saddened. Is the old generation really so worn down? It is an interesting concept. They have been fighting since their young adulthood and hoped to have left this kind of conflict behind. Now it is repeating itself and they’re more involved than ever. New powers are at play, young ones with unimaginable strength. Who wouldn’t be tired after all those years, faced with such challenges? But how do they respond to that? By hiding away pessimistically like Luke does, or by continuing to fight and inspire like Leia does. Also, is it just me or does Luke look vaguely threatening and disapproving when Rey emerges from the water?

On to Finn, who is being marched across a First Order corridor, looking very unhappy about it. I’m not surprised that they will all end up on a First Order ship or base again, much like towards the end of The Force Awakens. Bring all your characters together in a dangerous place and see what happens. The hints we get start with another Snoke voice over:

Snoke leans into the camera, hand outstretched, with tiny, beady eyes. Also, he is rather small and old, not as imposing as his hologram in The Force Awakens would have us believe. Napoleon complex, perhaps? But despite being small, he clearly packs one hell of a punch, as Rey is bent over backwards, screaming. Kylo clearly learnt his body manipulation from Snoke, since we can see the latter’s robes in the back here. He also seems to be sitting in a chair similar to Darth Sidious’ in The Return of the Jedi. Perhaps he is trying to torture her into unleashing her full power, much the way Sidious tried to taunt Luke into killing Darth Vader. But what comes after this is what truly made my day.

‘I need someone to show me my place in all this.’

Her face one of confusion and doubt, to me. And then we see Kylo, who looks quite sympathetic, yet also like he can’t believe this is really happening. Remember when he told her she needed a teacher and she cut his face for suggesting it could be him? Well how the tables have turned! Here she is, wiser yet more unsure, and she needs help. And then he stretches out his hand.

This moment had me, as the kids shay, shook! They are so clearly implying that by the end of this film Rey and Kylo will meet again and that Rey may turn to him for advice and help, thereby maybe even turning dark… I have seen countless people theorise online that Rey would be the one to bring Kylo back to the light. Especially among Reylo shippers this is very popular. But I am enormously intrigued by it potentially being the other way around: Kylo being the one to bring Rey to the Dark Side. Luke is a terrible mentor in this trailer, let’s be honest, so Rey being lost and confused, in need of guidance makes total sense. It also links back very clearly to Anakin in the Prequel Trilogy who, despite actually having a supportive and caring mentor, was still very much lost at sea, desperately craving an authority figure to tell him what to do, to tell him how things stood and what his place was.

These last few moments were what really made me excited. Although everything else looks good, it is that tension created by these last moments that raises a whole range of interesting questions. Star Wars has never shied away from asking questions, and especially in the Prequel Trilogy Lucas tackled a whole range of emotional and political topics, adding an enormous amount of depth to his Saga. If what I hope happens happens in The Last Jedi, then the Sequel Trilogy will go the same way as the Prequels. What is loyalty and what is betrayal? Why doesn’t the Jedi Order/Luke help more?

Also, have a look at the theatrical poster that was released just before the trailer: 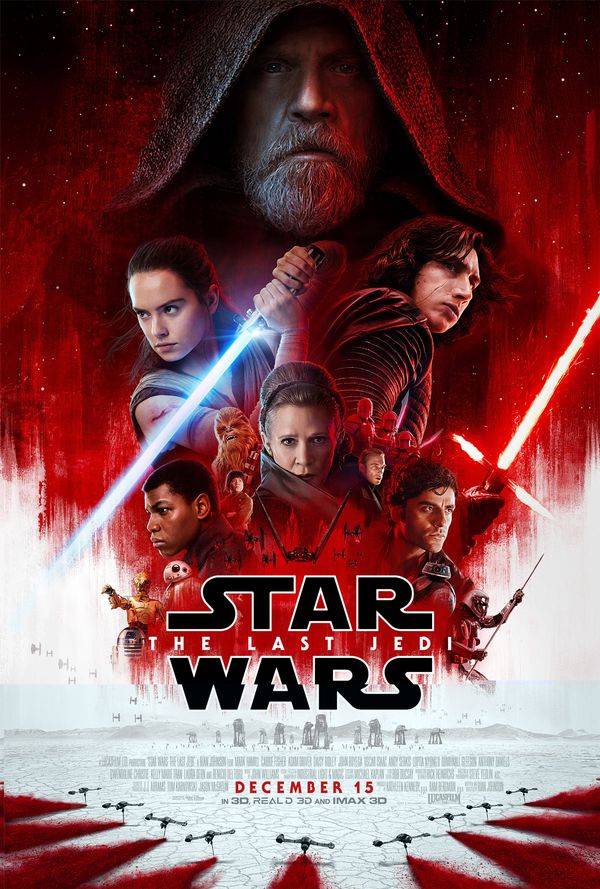 The way Luke looms over this poster is not exactly comforting. Leia’s stare straight out of the poster is also chilling. Rey and Kylo are beautifully symmetric with their lightsabers and interestingly, it is Rey that looks combative while Kylo looks pensive.

So, what did you think? Has this trailer made you more excited for December? And what do you think are the odds of Rey going dark?

4 thoughts on “‘The Last Jedi’s Second Trailer is here!”