We got the first episode of the much-hyped Forces of Destiny called ‘Sands of Jakku’. Directed by Brad Rau and written by Jennifer Muro, ‘Sands of Jakku’ focuses on Rey and BB-8’s first adventure on Jakku. Have a look at it below and then join me for some initial thoughts on Star Wars‘ new venture.

‘The choices we make. The actions we take, moments, both big and small, change us into Forces of Destiny.’

God I love this intro. Is it too soon to get it tattooed? Hearing Lupita Nyong’o’s voice again was great, as was hearing Daisy Ridley providing the voice for Rey. Together with Rey’s Theme playing in the background, it does feel like we’re right back in the Star Wars universe, and that is what matters after all.

‘Sands of Jakku’ is a rather straightforward story, picking up straight after the scene in The Force Awakens where Rey and BB-8 meet.  As they track over the sand dunes, a Nightwatcher Worm pops up its head and observes the two. However, the creature reveals itself to be much bigger and much more of a threat than previously assumed. Feeding off junk, it sees the perfect afternoon snack in BB-8. Now it’s up to Rey to defend her new friend. I had wondered before why they left that shot of the creature in TFA, but now it kind of makes sense. Then it just conveyed a slight sense of threat, but now it shows itself as the perfect set-up. And knowing Lucasfilm, they definitely planned this out. There’s some smart people in the Story Group and they love their consistency. 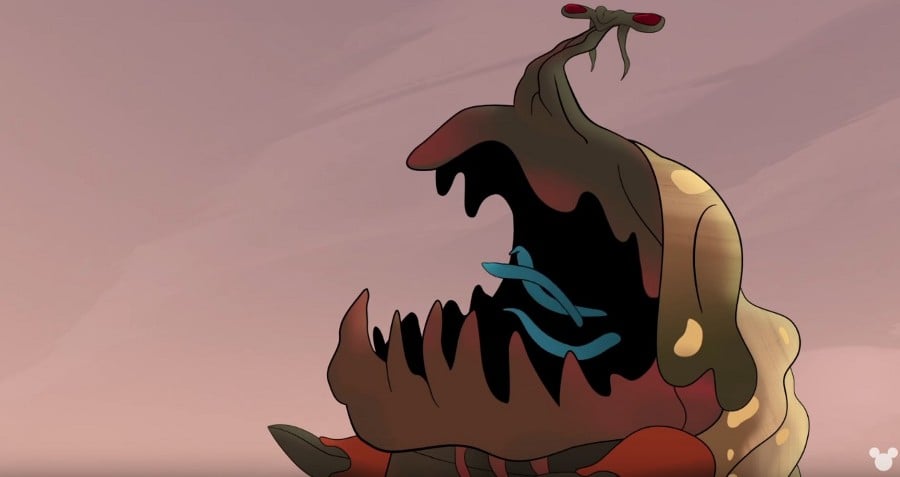 The main reason I like ‘Sands of Jakku’ is because it gives us even more of an insight into Rey’s character. A film meant for general release only has so many minutes to spare, and there is a lot of characterization that falls by the wayside during editing. This short very clearly strikes me as something they had planned for the film but which was, in the end, too inconsequential to “waste” almost three minutes on. I probably would have made the same decision if I had to, but it’s very nice to still get these moments. ‘Sands of Jakku’ confirms Rey is a very compassionate person. Although she has only just adopted BB-8, she jumps in immediately to protect him, even risking her beloved staff. (Side note: is it just me who loves the staff? I want one…) But she also shows herself to be aware of the creature’s situation, that his actions are driven by hunger and perhaps desperation, and not malice. I think this is a key insight into Rey’s character. Growing up and having to fend for herself on Jakku means she has probably seen both the worst and the best humanity and aliens have to offer. Terrible circumstances can force people to do terrible things, but those circumstances also allow for kindness, understanding and compassion. I think it is this balance which perhaps also allows her to feel both the Light and the Dark Side of the Force.

I quite like the animation style Forces of Destiny is going for, while also feeling it falls far behind the beauty of Star Wars: The Clone Wars and Star Wars Rebels. It looks almost like a refined version of the earliest The Clone Wars animated series. Some of the shots are very nice and I’m mainly thinking of the shot used as background for the Star Wars logo at the beginning. The characters are clearly recognisable, their emotions are also well-portrayed, but it is very simple. It makes sense for these shorts to not go as in-depth as for example SW:TCW did, and I will have to reserve full judgement until we have seen some more shorts and can assess how they deal with backdrops that are less drab than Jakku. Give me a short about Padme and her Handmaidens on Naboo and then we’ll talk.

Overall, I’m very pleased with the first episode of Forces of Destiny. These episodes will seemingly fill in little moments in the canon, continuing to develop some of our favourite Star Wars characters outside of their own movies or shows. I’m personally especially excited for the Ahsoka, Padme and Leia episodes!

What do you think of Forces of Destiny‘s first episode?

One thought on “Forces of Destiny #1: ‘Sands of Jakku’”