We have finally set our eyes on the beginning of much anticipated Season 3 and the first episode ‘Steps Into Shadow’ has been pretty astonishing. For me this was an episode that updated us on the characters and larger structures by highlighting their strengths and weaknesses. It showed the spread of the Empire’s greed on one side and growth of the Rebellion as well as many trials that might await them on the other. It also zoomed in on individual development through the ups and downs on Ezra’s and Kanan’s paths.

As much as we are excited to see Ezra physically grown up and rejoice at his newly acquired skills, the liabilities and burdens of the more difficult choices he has to make are becoming more apparent. Ezra is much more able to take initiative and lead. Hondo Ohnaka notices it out
loud, ‘Is that really Ezra? My, 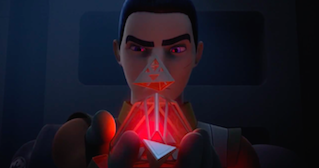 look how you have grown!’ We see Ezra getting promoted to a Lieutenant Commander, which means he now had even more responsibility for the operations he would lead. With all the perks of being grown up there are obviously some downs. These are revealed through the personal struggle that Ezra faces with himself as well as in the relationship with his Master. Ezra blames himself for what happened to Kanan and Ahsoka and he still can’t let go. He still believes that the Sith holocron that he possesses will give him power to ‘never let his friends get hurt again’. Albeit that power being very illusive Ezra learns some of the Dark side tricks and uses them against the enemy. He is not yet willing to realise that such power comes at a price… 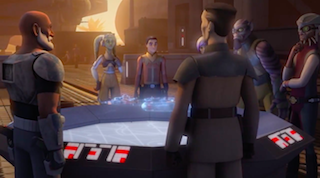 sking Tarkin to mobillise the 7th fleet to solve the ‘stubborn’ Rebels problem. She ‘needs someone who sees a bigger picture’ which is when, as we all know from the trailer, Grand Admiral Thrawn comes into play. He has an incredible ability to find links between different pieces of information. Not only that, he was also shown to be able to infer the intentions of the opposing side and carefully plan on how to outsmart them. Fro 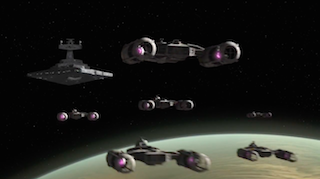 m just two pieces of evidence he had foreseen the Rebels’ plan to steal ships from the Imperial junkyard at Reklam Station on the planet Yarma. His forces under Governor Pryce’s command successfully intercept Rebels but let them escape at the end, hinting on Thrawn having a bigger picture in mind than just capturing a single Rebels’ cell…

Kanan is depicted being distant not only from Ezra but from everyone else. Not only Kanan is not around but the first attempt he tries to make to talk to Ezra turns out against him. Kanan step

s upon the Sith holocron in Ezra’s room and takes it away warning Ezra about the dangers of the path through the dark side. This sowed a further seed of distrust between them when Ezra
exclaimed, ‘Fine, I don’t need it. Just like I don’t need you.’ Kanan’s deep imbalance awakened a mysterious creature Bendu who embarked upon helping and teaching Kanan to let go of

all the anger, hate and fear that he holds. Kanan was unwilling to see things differently and was shattered about losing his sight. Despite his situation showing no mercy at a first glance he learns to let go of fear, grief and anger. Kanan finds another ‘vision’ through his senses, but most importantly learns to see himself. In the meantime Ezra’s ambitions lead him to almost failing the mission and loosing a whole ship due to not having a proper plan and possibly enjoying his small victory at Reklam Station for too long. Ezra is shown much vulnerable and desperate. He still needs Kanan and that is where his Master returns back to him.

Being back safe and sound on Atollon we see Kanan and Ezra united again stronger than ever. ‘I’ll always come back,’ said Kanan. ‘I know,’ Ezra replied. The trust between the Master and the Apprentice is restored. But the vulnerability of that bond and all the Rebels is shown clearly in that bittersweet moment when Hera says with hope for the Rebellion that it is growing every day. That is where my heart sank because just moments before that we heard, almost as a warning, that the bombers they stole from Reklam Station were supposed to be delivered to another Rebels’ cell; and we know that the enemy probably knows something about that already… One can only wonder which strengths will persist or which weaknesses will overcome them and what else does Grand Admiral Thrawn know and really means by saying, ‘They will be the architects of their own destruction.’