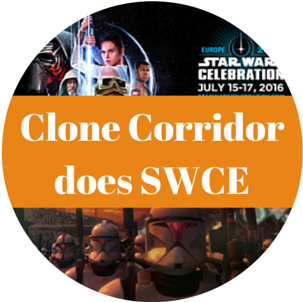 The Rogue One: A Star Wars Story panel on Friday is perhaps one of the most exciting things I have ever attended. The atmosphere in the room was palpable, everyone holding their breath for as much information as possible. The panel itself, with all its brilliance, technical flaws and spoilers has been written about by pretty much everyone already and there is not much I can add to that except saying that the panel was indeed as fun as it looked. So instead of a minute by minute panel discussion, I just want to highlight a couple of things that stood out to me in the sizzle reel.

From the very start of the reel I had a great feeling about the way in which Edwards will let visuals speak for him, especially when it comes to characterization. Starting with a lone figure in front of a desert landscape, there is both a sense of desolation and of anticipation to the reel, all of it centred on the way in which it is framed. We see this shot repeated a few times, one character taking centre stage each time, alone and usually in danger. This is, in some ways, quite reminiscent of The Force Awakens, in which both Rey and Finn are seen in lonely shots against the harsh Jakku environment. What I deduce from that is that we’ll find each of our Rogue One characters in a position where they’re alone, reliant on only themselves but therefore also highly distrusting. Its’s a universe which is slowly growing darker and the loneliness and apprehension in each of the early character shots is, I think, a great indication of the mindset of the Rogue One characters.

It’s impossible not to discuss the action since it is incredibly present throughout the reel. If anyone still had their doubts, this reel definitively shows that Rogue One is a war film a la Saving Private Ryan. The war and the danger aren’t short bursts of action interposed into the film to give it some zest, that danger is ever-present. These characters will be constantly fighting and running, most likely, and it is that which will give Rogue One a very different flavour to other Star Wars films. There might be a martial urgency and an immediacy which the Saga films, due to their role in maintaining and developing an ongoing story, sometimes miss. Perhaps the most important thing in filming action scenes is keeping it interesting, giving your audience something new to look at.  Part of the reason why Mad Max: Fury Road was such a success was Miller’s dedication to presenting his extended car chase in a fun and new way. Edwards faces a similar challenge and from the reel we get the idea that he focuses very much on putting the audience right in the middle of it all. Edwards and the camera can constantly be found at the centre of things, getting as close to the characters as possible to let the audience share their experiences. This is what made the opening scene of Saving Private Ryan so visceral and memorable and, if done well, it will serve Rogue One immensely. New technology allows a director to bring experiences to an audience like never before and the evidence from the reel seems to suggest Edwards plans to take full advantage of these. During the Lucasfilm: The Art of Storytelling panel (which we might also do a write-up of) we were told of the use of virtual reality and new advances in “real life” lighting on CGI objects to allow both the director and the actors to immerse themselves into the world of Rogue One, and thereby the audience as well.

Something that struck me about the reel the first time I watched it, as well as during all subsequent viewings, was the look of “the crowd”. Post-Prequels we find the Galaxy in a state of technically “peace” in which the Empire rules and pretends to do so benevolently. The Empire is trademarked by a kind of uniformity, a distinct lack of diversity, individuality or personality. In contrast, the Prequels’ Republic was full of different species and cultures. I recognized a similar diversity in  the Rogue One reel, giving us a hint not only of different species etc. but more importantly of different cultures and traditions, expressed through costuming and casting. I felt that in The Force Awakens we saw a very homogeneous crowd, by which I mean that despite being diverse I didn’t necessarily get a similar sense of cultural variety as the images above give me. The introduction of the planet Jedha, where faith in the Force still exists, but in its own way. It is probably unnecessary to say that I am very excited!

There is much more I could comment on but I want to end of a final note of utter praise before it becomes too much. One of the first images of the reel and trailer that we saw was the one below:

What I loved about the initial idea of bringing in different directors and doing stand alones is that it would allow Star Wars to expand and to show us truly new things. There are a few images which truly stand out as being different, of introducing the audience to something completely new. The Death Star itself, for example, was something completely new and revolutionary, while for example the shot of the Gungans emerging from the mist in The Phantom Menace also introduced a different kind of feel to the Prequels. It combined a mystery and mythical atmosphere with something amphibian and slightly alien, unsettling the audience a little bit. The above shot blew my mind because not only is a tropical setting something  we have never seen in Star Wars before, but the threatening presence of the storm troopers in such an idyllic setting is a perfect contrast. Again, it is unsettling, it catches the eye and it is new. And that is what stand alones should bring to Star Wars, something new and different.

On a different note, the panel was great for introducing the cast to the fandom and vice versa. Rogue One has a brilliant cast which seems to have a great chemistry. Felicity Jones was lovely and clearly passionate about Jyn, while Alan Tudyk was absolutely hilarious. It was also great to see Donnie Yen and Jiang Wen become a part of Star Wars and be embraced the way they were. Ben Mendelsohn is a gift to the world, while Forrest Whitaker seems to be very aware of his character’s history within Star Wars. Riz Ahmed was both funny and, by the sound of it, plays an incredibly interesting character, as does Diego Luna. Mads Mikkelsen couldn’t really say but did reveal the scientific side of his character. Finally, Gareth Edwards also told a story of George Lucas visiting the set and joking around with him, which was great to hear. Overall the panel gave the impression that Rogue One is a very vibrant film and that everyone involved seems dedicated and excited about it. The worries about the reshoots can be completely laid to rest, I think, and the crowd reaction during the panel and the two days afterwards was overwhelmingly positive. I can’t wait for December…