It was a pivotal scene in Season 5 of The Clone Wars whose impact was however overshadowed by the final arc of the Season which brought so many emotional moments. Rebels this week gave us ‘the end of the beginning’ of the Rebellion against the Empire. A good moment to look back at the start of the Rebellion.

suffered under the rule of a puppet king placed there by the Separatists, while the legitimate ruler was kept in prison. A small band of Rebels formed trying to change this state of affairs around the brother and sister Saw and Steela Gerrera. The Rebels of Onderon used a symbol that was foreshadowing the symbol of the future Rebellion against the Empire. One of the Rebels was Lux Bonteri, who during the arc became somewhat of a love-interest for Ahsoka Tano. Something that had been already in the air ever since the two met in previous seasons. However Lux seemed in love with Steela rather than Ahsoka. It placed Ahsoka in a situation where she needed to keep her personal emotions from clouding her judgement.

This arc also saw Ahsoka become the sole representative of the Jedi, and the Republic, on Onderon in supporting the Rebels.

As the Onderon System was formally part of the Separatist movement any direct involvement of Jedi or Republic forces would draw in full scale Separatist forces and hence armed conflict far beyond the more modest aims of the Rebel insurgency. So the Jedi chose to send a ‘training mission’ to the Onderon Rebellion consisting of Skywalker, Kenobi, Rex and Tano. After the initial training remained and she had to witness the Rebellion being out-gunned by the Separatist droid armies. That placed Ahsoka in a situation where she needed to keep her feelings of frustration and anger at the political manoeuvring of the Jedi from clouding her judgements too. A highly questionable weapons deal between Skywalker and Hondo Ohnaka brought a military advantage to the Rebels in the form of rocket-launchers. 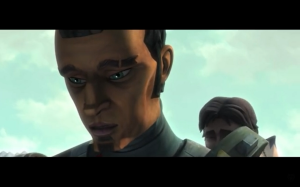 As this vehicle crashed towards the surface Steela and the freed legitimate king were in the crash-zone. Quick and resolute action by Steela, who had become the leader of the Rebels, saved the King from certain death and thus preserved the who legitimacy of the rebel movement. Ahsoka was gunned down by the smouldering gunship in her attempt, using the Force, to save Steela and Lux from falling down a cliff. Ahsoka was hurt but Steela fell to her death.

It was a fine example of story-telling where the different tones of moral grey were tightly entangled. 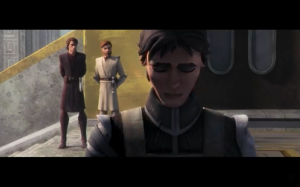 Saw’s brave but also brazen use of a weapon of doubtful origin and legitimacy, Steela’s self-sacrifice as Rebel leader for the survival of the legitimate rule of Onderon, Ahsoka’s choice to save Lux, for whom she had feelings, first and to find her attempt at saving Steela, Lux’s love, thwarted. It was a brilliant cocktail of mixed emotions, guilt, tragedy and heroics that meant that this arc needed a closing scene that would some how address these things one more time.

We have seen many deaths on Star Wars: The Clone Wars but relatively few funerals, some funerals, such as Obi Wan’s, were even faked.

The funeral for Steela stood out because of the beautiful wide panoramic shots, the wonderful music and the effective way in which it addressed the emotional whirlpool that the last battle had created. 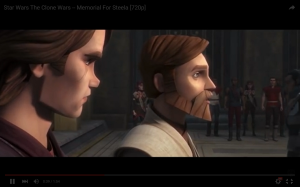 Saw Gerrera was left clearly traumatised by the loss of his sister, ready to let go of Rebellion and fighting. It wasn’t until in this Season of Star Wars: Rebels, in the  ‘The Honourable Ones’ that we hear Agent Kallus recount a story that confirms that Saw Gerrera is indeed the leader of a Rebellion against the Empire on Onderon. It seems to me that this was a set-up for a story we are going to see in Rebels Season 3.

Steela’s funeral is also the first time Ahsoka openly asks herself about the cost of sacrifice, whether it is all worth it.

Anakin observes that Steela’s example will remain an important influence on Ahsoka in her later life. Steela’s life wasn’t lost in order to decide a battle, in order to steal victory from the jaws of defeat. Steela’s sacrifice came when the battle was all but over, the enemy defeated and its most potent weapons destroyed. It was the very act of that destruction that led to Steela’s unfortunate death. But had Steela not chosen to save the king, and rather chosen to save herself, the whole Rebellion on Onderon had lost its legitimacy. Only with the king alive was there a clear path forward.

I have always wondered whether Ahsoka realised,

when she first lifted Lux from the edge of the cliff and Steela only second, that her choice was a deeply afflicted one. I think she did. It probably made her think about her choices and its effect that day in Onderon many more times. And possibly it made her realize that Steela’s sacrifice was not the result of her maybe questionable choice, but the result of Steela’s determination to keep open that path into the future for her Rebellion. It might just be that that same thought crossed her mind when in the last episode of Rebels in season 2 she looked at Darth Vader and simply said “I won’t leave you … not this time” because she saw a way forward into the future that required a sacrifice.

One thought on “Scene it? – ‘Steela’s Funeral’”