We’re back with another guest post by Thomas Storai from The Midi-Chlorian Center, giving us another one of his fascinating Anthology Films We’d Like To See entries! Remember that casual mention of the ‘Siege of Mandalore’ in Star Wars: Rebels? Well, Thomas ran with it and wrote another great story for you including some of everyone’s favourite characters! Filling in some of the canon blanks, while not necessarily sticking to canon, this is a great example of why we started this series!

The Siege of Mandalore Ray Park as Darth Maul (and for the voice Sam Witwer)

The film opens just a few days before the beginning of Star Wars Episode III: Revenge of the Sith. Anakin and Obi-Wan are on Alzoc III with Captain Rex and Commander Cody fighting the Separatists. The two generals decide to split up, with Anakin going North to take control of the mountains while Obi-Wan heads to the droid outpost. After taking control of the place, Cody tells Obi-Wan that the Jedi Council wants to talk to him, so they establish a communication with the Jedi Temple. Mace Windu, Plo Koon (in hologram), Ki-Adi Mundi, Saesee Tiin, Agen Kolar and Yoda are in the War Room of the Temple. When Obi-Wan’s hologram appears in the room as well, to the master Jedi’s surprise, Ahsoka is there (in hologram). Ahsoka reveals that the Mandalorian resistance is falling apart and Darth Maul is destroying everyone who stands against him, but with the help of the Republic they could win the planet back and Korkie Kryze (who became the leader of the resistance) promised they would join the Republic if the planet is freed from Maul. Obi-Wan asks how Ahsoka ended up on Mandalore and she reveals that she found some Mandalorians on Chandrila who remembered her from her adventures on Carlac and asked for the Jedi help, She thought their cause was good and decided to go help them. Mace Windu explains they don’t have many troops available so Obi-Wan proposes to send a part of the 501st Legion, since the Battle for Alzoc III is almost over. Windu agrees but asks Obi-Wan not to reveal the truth about the mission to Anakin. Obi-Wan agrees despite not liking the idea.

On Alzoc III, Obi-Wan returns to the moutain with Cody and joins Anakin, telling him a part of the 501st Legion has been assigned to free Mandalore. Anakin proposes to go but Obi-Wan explains the Jedi Council orders are only to send the Clones. Anakin appoints Rex at the head of the group that will go to Mandalore. Rex takes Jesse and Kix with him too and he contacts the Bad Batch, asking them to come help them too. On Mandalore, Ahsoka and Bo-Katan, along with the former Mandalorian cadets, are hiding at the ancient Academy that is not used any more. Ahsoka hopes that with the help of the Clones Maul will fall and Mandalore will be free again. Bo-Katan has her doubts but knows this is her only choice.

The two Venator-class cruisers of the Republic arrive on Mandalore and engage in battle with Maul’s fleet. Rex leads the ground assault with gunships dropping the troops on the docks of Sundari. The shuttle of the Bad Batch also arrives and crashes on the docks. The Bad Batch opens the way to the city as Amis and Soniee arrive to help them with members of the Death Watch. Darth Maul is in his palace when Rook and Almec inform him that the Republic is invading the planet. Maul fears that it is his end after Sidious ended his Shadow Collective, a few months ago. He decides to stay inside his palace and sends Rook Kast to fight.

Rex arrives at the Academy where Ahsoka, Bo-Katan, Korkie and Lagos are deploying their forces on Sundari. Ahsoka and Rex share a scene in which they tell each other they are happy to work together again and talk about the events that lead to Ahsoka leaving the order. Rex also gives her a lightsaber, saying Obi-Wan told him she could use that against Maul. The group tries to go towards the Palace to take down Maul once and for all. On the docks, the Bad Batch (including Echo) have secured the landing zones, letting more and more Clones into the city. Amis and Soniee are going into the city with the team as well when they face Rook Kast and her personal militia at the Hospital.

Ahsoka and the team are at the Mandalore plaza in front of the palace but the security is too high for them to get inside. Bo-Katan proposes a diversion and takes some of her troops along for her plan, as the rest of the Clones are too occupied with the rest of Maul’s forces in the capital. During the fight with Rook Kast, Amis gets killed but so is Rook by Wrecker. The team receives a message from Rex asking for help at the Palace and steals a speeder to go there.

Darth Maul, realizing his enemies are coming, decides to go outside his Palace and fight them. He engages in a deadly fight with Ahsoka Tano as Rex and the others fight Maul’s Mandalorians. The Bad Batch and Amis also arrive at the Plaza as reinforcements. Suddenly  Rex and ARC Trooper Jesse receive a communication from Coruscant. It’s Darth Sidious, asking them to execute Order 66. Rex understand immediately what it is about and sees Jesse pointing his gun towards Ahsoka who is still fighting Maul. Rex asks him to stop but Jesse fires the shot. Fortunately it misses Ahsoka and Rex manages to disarm Jesse, but the Clone alerts his brother that Rex refuses to kill the Jedi, provoking chaos in the battle. 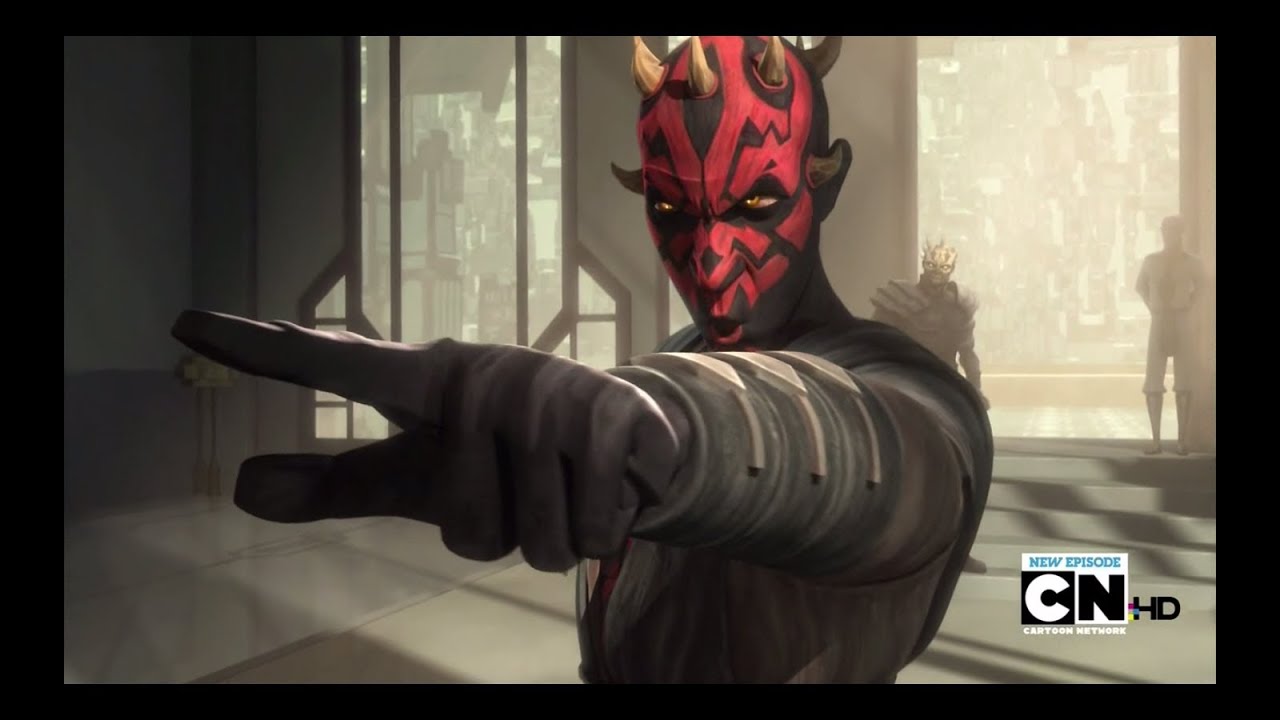 Bo-Katan and the Mandalorians help Rex and fight the Clones too. Rex has some problems with fighting his own brothers. After years and years of working with them, they are now the enemy. Kix and a squad attack Ahsoka, forcing her to stop fighting Maul and attack the Clones, Maul takes the opportunity to leave in the chaos and escapes Mandalore. Ahsoka has no choice but to kill Kix and she joins Rex, asking what is going on. He reveals everything he knows about the inhibitor chip. He realizes the Bad Batch is also helping them. They didn’t have the chip, except for Echo who is on the side of the other Clones. Bo-Katan realizes that Mandalore is going to fall and they won’t be able to face the Republic army. As the battle rages on, ARC Trooper Jesse is killed by Rex’s shot. Rex is devastated that he had to kill his own brothers. During the battle, Soniee is wounded and Lagos tries to save her, unsuccessfully. In her last moments Soniee asks her to run away and tells her that Mandalore has fallen, it’s over. Lagos reaches Korkie and proposes they go before it’s too late. Ahsoka, who is next to them, agrees and asks Bo-Katan to retreat. She refuses, along with the Bad Batch. Ahsoka, Rex, Lagos and Korkie find a Mandalorian shuttle and escape from Sundari with the chaos surrounding them.

The battle on Mandalore continues, Echo is killed by his brothers from the Bad Batch during the fight, but quickly the Bo-Katan’s and Maul’s Mandalorians  are surrounded by the Clones and are forced to surrender. The Bad Batch too are captured. The little group that escaped lands on Onderon where there are no battles going on at the time. Lux Bonteri welcomes them. Ahsoka explains what has happened and asks for a refuge here, which Lux accepts. Rex says he needs to contact a friend who also removed his chip – it is Wolffe and he asks him to join them on Onderon. Lux contacts Bail Organa, asking if the same is going on elsewhere. Bail reveals Clones everywhere are turning against their Jedi generals and that he is on his way to pick up Yoda.

Ahsoka makes Lux asks Bail if he has any news from Anakin and Obi-Wan. Bail indicates that Obi-Wan was on Utapau but he doesn’t know if he’s alive and that Anakin was at the Temple, but that the Temple has fallen and is under the Clones’ control. Rex and Ahsoka are devastated to hear Anakin is most likely dead but hope he found a way to survive. Lux asks Ahsoka to join Bail and Yoda but she refuses. She thinks that what is happening is a tragedy but she is not a Jedi anymore, so she will do things on her own without Yoda. She thinks it is better for them to remain separated, hidden, so the Clones won’t find them. Wolffe joins them and announces he couldn’t save Plo Koon on Cato Neimoidia. Ahsoka is sorry to hear the news, all the more as Plo was the Jedi who discovered her and brought her to the Temple in the first place. Lux has to go to Coruscant as Mas Amedda is asking all the senators to come for a special announcement.

On Mandalore, Almec, Bo-Katan and the different clans are gathered at the plaza of the palace where Admiral Yularen announces to them that the Empire is taking control of this planet and that they’ll be free again, if they acknowledge who’s in charge. Bo-Katan and her clan accept while she prepares a resistance behind Yularen’s back. With the Night-Owls, who are still loyal to her, she goes to Concordia while the old Mandalorian clans start to reform, since they don’t have a leader to unite them all like in the time of Satine. Almec enjoys the situation, being named Governor of Mandalore, swearing allegiance to the Empire. The Bad Batch are sent back to the cruiser where they’ll be sent to Coruscant for martial court for treason.

On Coruscant, Lux goes to see Palpatine’s announcement about the Empire. After, the speech, Bail catches him and tells him Obi-Wan Kenobi is still alive and that they are at the Temple to find answers. Lux tells him he found no Jedi as Ahsoka specifically asked him not to tell Bail she’s alive.

Back on Onderon, Lux reveals the situation to his friends (the creation of the Empire, the applause of the senators, etc.). They realize the Senate is not going to rise against Palpatine and that the Republic is indeed gone. Lux also reveals that Obi-Wan is alive. Ahsoka and Rex are relieved that at least one of their friends survived. Lagos and Korkie decide to stay on Onderon as their choices are limited and they appreciate that Lux is not a supporter of this new Empire. Rex and Wolffe decide to leave for Abafar, a world where nobody will alert the Empire of them being Clone traitors. Ahsoka tells Rex goodbye and promises they’ll stay in touch. She decides to stay on Onderon for awhile, as she believes her and Lux can figure things out and maybe try to find a way to fight against their new enemy. The movie ends with Ahsoka and Lux seeing Rex’s shuttle leave Iziz, the capital of Onderon.

2 thoughts on “Anthology Films We’d Like to See #4: ‘The Siege of Mandalore’ by Thomas Storai”