In the first instalment of this series Rogue 47 discussed the magic that a Boba Fett-Han Solo-JarJar Binks buddy-cop film would be. Today we’ve got another instalment of Star Wars Anthology Films We’d Like to See for you but with a twist this time! This one was submitted by Thomas from the newly-renamed The Midi-Chlorian Center and I absolutely love his ideas! Check it out below and many thanks to Thomas for joining us in this series. 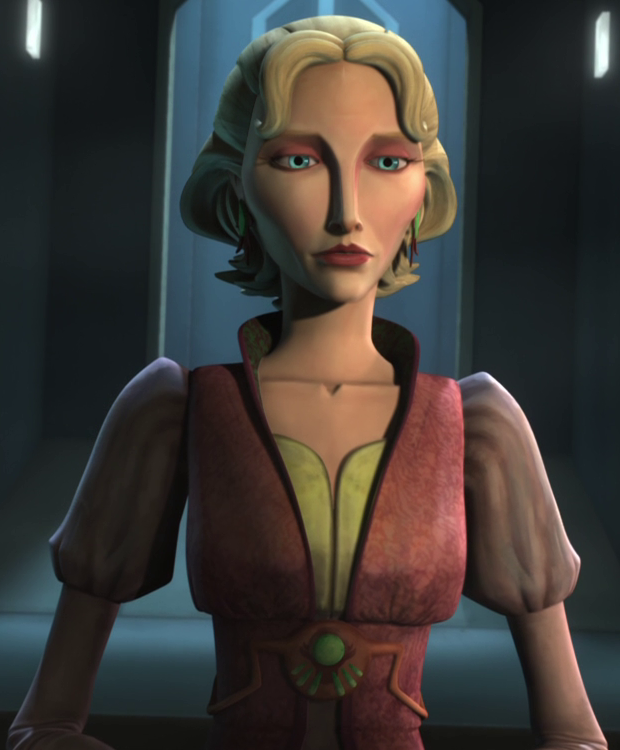 The film starts 5 years after Star Wars Episode III Revenge of the Sith, Obi-Wan Kenobi is on Tatooine where he had to exile after the fall of the Republic. He has a box in his house filled with souvenirs he had taken from various worlds and at the bottom of it, he finds a crystal pendant representing the symbol of Clan Kryze. He starts to remember his first encounter with Satine Kryze.

We’re now at around 6 years before Star Wars Episode I The Phantom Menace. Obi-Wan Kenobi and Qui-Gon Jinn are at the Jedi Temple where Qui-Gon trains Obi-Wan at lightsaber fighting techniques  when they are summoned by the Jedi Council. At the Jedi Council chambers, Mace Windu announces to them that they are to be sent to Mandalore immediately where the Duchess Satine Kryze is in big trouble as her new government is facing a civil war after she has installed a new political regime called the New Mandalore, a programme with which she wants to bring peace back to her homeworld.

On their arrival on Mandalore, Qui-Gon Jinn and Obi-Wan Kenobi are witnesses of a great battle, the planet is in chaos. Horatius Kryze, Satine’s father, is leading the supporters of Satine’s regime into defending Sundari, the capital. When the two Jedi arrive at the palace, Satine and Haig (Satine’s sister, the mother of Korkie (who isn’t born yet)) are surrounded by the Death Watch forces lead, by a female Mandalorian (who is in fact Bo-Katan Kryze). The Jedi manage to make the Death Watch retreat and decide that the safest option for Satine’s security is to leave Mandalore. Before leaving the planet, Satine says goodbye to her father and her sister, the only two members of her family who remained loyal to her. Horatius promises that when she returns Mandalore will be theirs and that she will be able to fully instore her peaceful regime.

On Concordia Bo-Katan Kryze reports to Shaa Wren that Satine Kryze has escaped. Shaa decide that they cannot let Satine survive but they surely cannot go after her, since they are occupied with battling the Mandalorian forces loyal to her on Mandalore. Gale Wren, a young man and son of Shaa, proposes to hire bounty hunters to hunt Satine down. Shaa accepts and asks Gale to lead the bounty hunters team. Gale decides to hire Elias Stark and Mira Elsiin Stark, two bounty hunters who are married and work as a team. With them they bring a team composed of Karn Cor and Auren Elaessar, two other badass bounty hunters.

The Jedi and the Duchess make their first stop on Kalevala, a planet part of the Mandalore system but thought by the two Jedi to be safe as all the action was on Mandalore. Unfortunately, they quickly realize that their arrival hasn’t gone unnoticed and Gale with his team of bounty hunters arrive. The Jedi confront them but decide to leave the planet as it is too dangerous and as they leave in their Jedi T-6 shuttle, Elias manages to throw a tracker on the ships to follow them.

The Jedi and Satine land on the main city of Abafar but just as they arrive, they realize the bounty hunters are there too. They have no choice but to leave again, this time going toRaydonia. On Raydonia, the bounty hunters shoot the Jedi shuttle, forcing the Jedi to land. They escape from the ship before the bounty hunters land and venture into the dense forests of the planet. The bounty hunters split into two teams, one with Elias and Mira and the other lead by Gale with Karn and Auren. The Jedi and Satine find a small village where they ask for a ship but the inhabitants tell them they will only find a ship in the capital at three days from there, so they decide to leave for the capital. During this journey, Satine and Obi-Wan slowly begin to develop feelings for each other. On their second day in the forests of Raydonia, they encounter Gale and his group who they have to fight. During the little skirmish Karn hurts Obi-Wan but when Karn is about to kill him Satine grabs Obi-Wan’s lightsaber and cuts Karn’s arm, letting Obi-Wan continuing the fight. Qui-Gon Jinn manages to kill Auren, forcing Gale and Karn to withdraw and contacting Elias and his wife to ask for reinforcements. As the Jedi and Satine continue their road to the capital, Obi-Wan and Satine talk about what had just happened and share a funny moment in which their feelings grow stronger. When they finally arrive at the capital, the bounty hunters are waiting for them. Qui-Gon Jinn decides to distract them and asks Obi-Wan to find a ship and get Satine out of there. This is what Obi-Wan does, leaving his master on Raydonia. Obi-Wan and Satine go to Draboon, a planet far away from the Mandalore system where they think the bounty hunters won’t find them. They decide to travel around any towns and settle down to a camp in the mountains. During that night Satine is attacked by a swarm of venom-mites and Obi-Wan carries her to safety. Still carrying her, Satine wants to thank Obi-Wan and they are about to kiss when the padawan falls and drops Satine who hurt herself with her back opened, bleeding, Obi-Wan has no med kits and is forced to take her to a city in Draboon where she is saved in a hospital. Though, she ends up being okay her fall leaves a scar. As Obi-Wan is in the town, he contacts his master Qui-Gon Jinn who has managed to escape since the bounty hunters are not following him anymore as they realized Satine was not with him. Obi-Wan tells Qui-Gon where he is, asking for his master to join them. When Satine finally leaves the hospital with Obi-Wan, they face Gale and his team of bounty hunters who had put a tracker on Qui-Gon’s ship and noticed he was heading to Draboon. Obi-Wan fights the bounty hunters and gets his revenge on Karn and kills him. Qui-Gon Jinn arrives with his ship just in time and gets Obi-Wan and Satine. Obi-Wan proposes to return to the mountain to pick up the ship he has instead of Qui-Gon’s ship who has a tracker so they do and then leave Draboon.

Gale and his team of bounty hunter return to Concordia and announce his failure to Shaa who decide to put a bounty on Satine’s head and record a message, sending it into the galaxy asking for anyone who has information about Satine to contact them for a big reward.

The Jedi and Satine go to Chandrila. In a scene Satine is about to talk about her feelings to Obi-Wan when Qui-Gon interrupts them. The motel manager, who is untrustworthy, has received the message of Vizsla and contacts him to tell Satine is on Chandrila. Shaa Wren sends Gale and his team of bounty hunters on the planet. On a night they arrive at the motel and when they are about to kill Satine who is asleep, Obi-Wan and Qui-Gon wake up, kill Auren and engage the fight with the rest. When they escape and return to the hangar, they realize that their ship has been blown up so they hide in the town. Gale, Elias and Mira search for them. After a day of searches, they find them and confront the Jedi who eventually escape again. Satine and the Jedi steal a speeder and leave the town heading up to the mountains of Chandrila hoping they will not be found. Eventually, Gale finds them but Obi-Wan kills him, doing everything to protect Satine. Qui-Gon decides they have to leave the planet otherwise, the bounty hunters will find them, they go to the capital and buy tickets for Corellia.

After one week on Corellia, Mace Windu contacts Qui-Gon Jinn telling him the war on Mandalore is over, the New Mandalore has won. The Jedi decide to bring Satine back but Elias and Mira have found them again and in a final fight the bounty hunters find death and Satine saves Obi-Wan once again, killing Mira. Pre Vizsla, who lost his father during the war, decides to keep the Death Watch alive after Shaa Wren’s death but decides to take another strategy to win his war. He decides to support Satine and keep the Death Watch as a secret organization, taking time to plot against the new Mandalorian political regime.

On her return to Mandalore, Satine realizes her beloved homeworld is just ruins and death. She finds Haig Kryze who tells her their father died. Satine and the Jedi go to see Horatius’ grave. Satine promises to her dead father that she will lead Mandalore to an era of peace and that war will never come back to Mandalore. Qui-Gon informs Satine that he and Obi-Wan have to return to Coruscant. Satine thanks the two Jedi and decides not to tell Obi-Wan she loves him and Obi-Wan decides not to tell her he loves her. Instead, Obi-Wan tells her again how sorry he is for Satine’s scar and she holds his face (the same way she does in ‘Voyage of Temptation’ when she talks about Obi’s beard) and she tells him that it’s okay because this way she’ll have a memory of him. Before he leaves, she tells him he’ll be a great Jedi and he’ll be welcome to come back on Mandalore when he wants to.  There, Satine gives Obi-Wan a pendant of Clan Kryze, telling him, that he’ll always remember her.

We go back on Tatooine 5 years after ROTS where Obi-Wan looks at the pendant with tears in his eyes and he hears Satine’s final words in his head “Remember my dear Obi-Wan, I loved you always, I always will.” After hearing these words, he puts the pendant back in the box and before closing the box he says “I’ll always love you Satine.”

One thought on “Star Wars Anthology Films We’d Like to See #2: Thomas’ ‘The New Mandalore’”