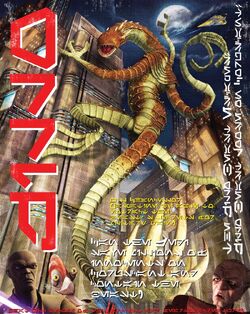 One of my favourite story arcs in The Clone Wars has been the two episodes centering around the Zillo Beast on Malastare. It is an absolutely heart-breaking story but also an incredibly serious one. The first episode, simply titled The Zillo Beast, puts the audience right where they’re used to, in the centre of a battle with the Clone army and the Jedi. The voice-over by Admiral Yularen tells us a new weapon has to be used in order to protect the planet of Malastare which holds fuel resources that the Republic desperately needs. It’s a scenario that seems ripped straight out of our own world in which fossil fuels are too often the cause for conflicts between nations. The Dugs seem a strong and proud people, desperate to get the Seperatists off their back but maybe also hesitant to get in bed with the Republic. It’s a set-up ready for things to go wrong.

The new weapon, as employed by the Republic, is a first sign that the episode’s caption, ‘Choose what is right, not what is easy’, may not necessarily be easily followed. There is no doubt that this Electro-Proton bomb is meant to at least echo the use of atomic bombs. It is a Doomsday weapon, which can only be used as a last measure and yet causes more havoc than anyone was expecting. Although ruthlessly effective against the Droids, it creates a sinkhole in which a Zillo Beast is awoken, an ancient species of Malastare. With the Zillo Beast Dave Filoni introduces a unique and dangerous creature which is strangely out of step with the new time it’s emerged in, both more powerful and weaker than those around it. It’s primitive and yet the way it is designed gives it emotions and an awareness that make it hard for the audience not to empathize with it. Its design and actions are also a reference to Godzilla, no doubt, another mystical creature both destructive and strangely sentient. Its appearance brings the tensions between the Dugs and the Republic to the brink, with the Dugs using their fuel supplies as a way of making the Republic give in to their desire to kill the Beast. From the moment it appears the Zillo Beast becomes a pawn in the game of all the other players present and its own innocence and rights are only upheld by one character: Mace Windu.

This episode is potentially the first time that Mace Windu’s strong belief in principles makes him the good guy. Usually it is Windu and his strict interpretation of the Jedi Code getting in the way of a happy ending, but in The Zillo Beast his ‘conscience’, as Palpatine mocks, is what gathers most sympathy. The Dugs immediate hatred against the Beast is not unrecognisable and yet feels extreme, whereas Windu’s empathy with the Beast feels ‘right’. The combination of Mace Windu and Anakin Skywalker usually suggests that some kind of morality issue will arise in the episode and it does so again in The Zillo Beast. Windu is opposed to the use of the bomb and to the killing of innocent creatures which sets him against the Dugs from the get-go which seems like a good position. From the point of view of the Dugs, however, he is not only interfering with their history and culture but also endangering their lives in favour of a beast. It makes for an interesting moral choice that the audience has to make for itself and The Clone Wars has always been good at bringing these kind of real world conflicts into the Star Wars universe in a way that feels true to it.

Although Chancellor Palpatine has absolutely no interest in keeping the Zillo Beast alive initially, his military interest are immediately raised by the Zillo Beast’s armour. His clear dismissal of the idea of saving the Beast for its own sake is a moment in which Darth Sidious seems to slip through the cracks of Palpatine’s careful facade. Anakin’s almost casual attitude to the whole problem is seemingly out of touch, perhaps for the first time. His willingness to go along with Palpatine’s plan of simply killing the Beast to his idea to resort to trickery to achieve their goal of saving it makes him truly seem like a different kind of Jedi for the first time. It is the conversation between Mace and Anakin which hearkens back to the opening caption and forms the crux of this episode. It can be difficult to do the right thing but that doesn’t mean it shouldn’t be the path you choose. Unfortunately neither of the two are aware of the games being played behind their backs and the episode ends on a dark note with the Zillo Beast being brought to Coruscant for research. Palpatine’s desire to profit from something innocent is the final message of this episode and it’s what leads us straight to the next and last episode of this arc: The Zillo Beast Strikes Back.

This second episode sees the delivery of the Zillo Beast on Coruscant, immediately setting up the next conflict by opposing the ‘most dangerous lifeform in the Galaxy’ with the ‘most populous planet in the Galaxy’. Again, there are Godzilla references here since bringing a giant reptile into a major city (planet) never works out well for anyone. But the episode’s caption, ‘The most dangerous beast is the beast within’, gives pause once again. Palpatine’s fascination with the power of the Zillo Beast gives us another glimpse at his ulterior motives. With this opening we’re back with the original theme of the first episode: the sacrifice of the innocent by those with power.

With Obi-wan’s introduction Mace Windu’s side finally gets some backing and when the scene switches to the Zillo Beast in captivity it’s not hard for the audience to immediately switch sides as well. I’m also glad about how the character of Dr. Sionverr Boll was approached. She is put in a terrible position and has absolutely no power except for her knowledge, which is being abused. She is a great example of how all of Star Wars constantly seeks after that grey area where nothing is clearly defined. Padme’s appearance in this episode brings back the importance of giving a voice to those who can’t speak for themselves. Throughout the Prequel trilogy and the whole of TCW Padme has been that voice and her strong principles, for once, align with Mace Windu. The Clone Wars‘ main characters are some of the most powerful people in the whole Galaxy but the series as a whole does well to never forget what happens outside the Senate. Padme often becomes the voice for those less fortunate and her appearance her makes it clearer and clearer how she and Palpatine are opposed. The Zillo Beast is an innocent creature and where that means something to her, it means nothing to Palpatine. The discussion between Palpatine, Anakin and Padme also beautifully sets up the conflicts that will reappear between the three in The Revenge of the Sith, with Anakin being torn in two.

It’s hardly a spoiler or unexpected when the Zillo Beast breaks free. It’s almost liberating at this point, with the Beast being always discussed but never getting to express itself. However, with its break for freedom the Zillo Beast also dooms itself to being deemed a threat. What is very well-done by the whole animation team is the Zillo Beast’s clear hatred against Palpatine. When Palpatine doubts is intelligence it narrows its eyes, when it sees him anywhere it strikes. It even seems to know it’ll find him at the Senate and keeps looking out for him. Although dangerous it still shows clear signs of intelligence. To the audience its anger seems justified and there is a strange pleasure in seeing it rip through Coruscant. And yet it is obvious something will have to be done to stop it and that it most likely won’t end well for the Beast. Once again, Filoni and his team put the audience in a moral clinch it’s almost impossible to get out of.

The Zillo Beast’s death is tragic and purposefully so. Both the animation and music make it clear this is not a victory. Its cries throughout the whole episode have been strangely emotional and when it’s in its death throes it becomes quite painful to watch. Halfway though the episode Padme argued it would have been best to never bring this creature to Coruscant and that feels more true than ever at this point. The sadness in the faces of Obi-Wan and Mace Windu at seeing the Beast die as well as the pure length of the scene really brings the message home that this is wrong. The Zillo Beast doesn’t come across as a Beast, but everyone else who stands by and lets its destruction happen does.

The episode finishes on Palpatine and his order to have the Beast cloned. What is so bitter about this whole arc is that, I believe unlike any other, it shows the powerlessness of the Jedi and the Senate against Palpatine/Darth Sidious. The character list is a tour de force, ranging from everyone already mentioned to also Yoda and Aayla Secura. And yet no one here seems to be able to either see through Palpatine’s plan or be able to do anything about it. The title of this episode is is ironic, since the Zillo Beast never truly ever stood a chance of striking back in any kind of significant way. The whole two-episode story arc is one filled with that irony. Although everyone who has seen the Originals knows how the Prequels must end, but it’s not always as clear as it is in The Zillo Beast and The Zillo Beast Strikes Back.

The Clone Wars, as I have argued above and many times over, doesn’t shy away from forcing its audience to deal with difficult issues, but it doesn’t necessarily provide you with answers. Who would’ve, or could’ve, acted differently than the characters have in this situation? Doing the right thing isn’t always easy and often what seems right isn’t actually right. Those who seem beastly may not be so, whereas those who seem holy often aren’t. And who is really innocent anymore when it comes to a time like this? As you can see this story triggers a lot of questions. With the use of the morals at the beginning of the episodes as well, The Clone Wars constantly asks its audience to confront itself and the beautiful and terrible thing about this storyline is that it it is so uncomfortably recognizable.

One thought on “‘The Zillo Beast’ arc: Innocence in a Time of War”