Some time ago I wrote a post about Zam Wessel, one of my favourite female characters to come out of the Star Wars Prequels who is often forgotten about in discussions about Star Wars. Another one of these women who, despite most people knowing about her, is still strangely cast aside, is Shmi Skywalker, beautifully played by Pernilla August. Hence, this post is dedicated to her. Although Padme Amidala, along with her Handmaidens, is the strongest female presence in the sense of screen-time in The Phantom Menace, it is arguably Shmi Skywalker who makes the greatest emotional impact on the audience.

With Shmi Skywalker George Lucas introduced a female character who filled the mother-role, which is always a difficult role to portray. In a lot of film and literature, mother-figures are side-characters whose whole existence as characters is dependent on that of their children. Parental figures function in the background as an explanation or trigger for things their children do or are used as a plot-device to get their children’s story-lines going. Just think of Uncle Ben in all the Spiderman films. Although this partially applies to Shmi Skywalker as well, since no one character can be independent of the others, she has a solitary impact as well and works on her own.

From the first moment she comes on screen, Shmi has a very strong and calming presence which is quite similar to Qui-Gon Jinn’s in some ways. She is an adult female character, which contrasts nicely with Padme Amidala’s young spirit and energy. With Anakin’s miraculous conception, Shmi clearly becomes part of the Mother Mary tradition, a woman so pure she is chosen to give life to the Saviour. What I love about George Lucas’ characterization of Shmi within this tradition is that she is not a young and innocent girl who takes a passive role in these events. Shmi is a woman who has suffered and worked hard all her life, edged on by a belief in something bigger and better. Sold into slavery early in her life, Shmi has not seen the good side of the Galaxy and yet she has raised her son to be kind and good-hearted. Despite the odds clearly being against her, Shmi is a survivor and someone who understands that sacrifices are never made in vain.

There is something hopeful to her story throughout The Phantom Menace and The Attack of the Clones, although much of it occurs off-screen. When Anakin comes to find her again in AotC it is revealed that Shmi not only survived slavery but found happiness along the way. Although tragedy has a way of always finding her, seeing Anakin again brings her a sense of completion and happiness despite her situation. Throughout every moment that she is on screen Shmi is a grounding presence, not only to Anakin but also to the audience. These films might feature Jedi, Storm Troopers and queens, but at the heart of the whole saga are people and their stories and no character represents that as well as Shmi. She has no control over the big happenings of the Galaxy and will never be able to sway the vote of the Senate on anything. But she has an impact in her own life and on those around her, despite constantly being put down. As such, she is an incredibly inspirational character, aside from her gender, because she represents the “little people”, those who suffer but go unnoticed by the system. Her hope and optimism are not idealistic and unrealistic but come from a belief in a high purpose and a higher goal. 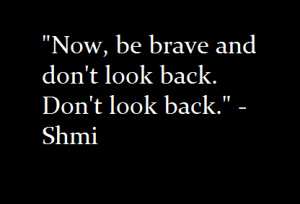 There is one scene which I believe is key to understanding all of what Shmi Skywalker means to Star Wars and it happens to be one of my favourite scenes in all of Star Wars. I am of course talking about Anakin’s departure from his mother. It is an incredibly emotional moment and as the Prequels progress it is clear how much being raised by her has characterized Anakin. There is a sense of self-sacrifice in her sending her son away and yet she is incredibly strong in this scene. There is no over the top drama or emotion, but rather a determination on her side for her son to have the best life possible. There is belief there in his potential and Lucas’ last shot of her alone is very visually strong. The determination here is important because each member of the Skywalker clan comes from this woman and shows the same kind of determination. Leia, who very much takes after her father and therefore after her grand-mother, is deeply determined in her political career and in her devotion to the Rebellion. The idea of moving onwards without letting that which is behind you affect you is as strongly present in her as in Shmi and is a message that Anakin himself struggles with very much. Shmi very much represents the starting point for the whole Skywalker-clan

Finally I want to touch on the relationship between Qui-Gon Jinn and Shmi Skywalker. Qui-Gon is a man who, despite all of his power and insight, can make rash judgements and decisions which is showcased in how he treats Jar Jar Binks (with dismissal) and Padme (patronizingly). In his conversation with Shmi, though, he shows nothing but respect. He values her opinion and her judgement, siding with her initial decision to not let Anakin take part in the podrace, and shows genuine respect towards her. Her kindness and charity towards these complete strangers is clearly something that touches him and he treats her like an equal, taking her word for Anakin’s parentage without question.

Qui-Gon Jinn calls his meeting with Shmi and Anakin destiny and Shmi believes this as well. Unlike many characters in Star Wars she is aware that we all play a small part in a larger universe. Her story is full of victories, not something a lot of characters in Star Wars or elsewhere ever get. She doesn’t just survive her circumstances, she surpasses them. Her presence throughout The Phantom Menace is one filled with dignity and she has stayed with me as a source of inspiration since the first time I saw her.