It’s time for another Scene It? post and for this one I have chosen one of my favourite moments from The Phantom Menace: the Queen-reveal. It’s probably not technically a single scene but it is definitely a single story-beat. It is great in a … END_OF_DOCUMENT_TOKEN_TO_BE_REPLACED

From now till the 18th of December posts about what was in the trailer, what wasn’t in the trailer and what could’ve been in trailer will abound. However, there is one thing in the trailer about which I simply have to add … END_OF_DOCUMENT_TOKEN_TO_BE_REPLACED

It’s Sunday, another week has passed and we’re another week closer to Rebels S2 and The Force Awakens. It’s starting to feel a little bit unreal that the Sequel trilogy is so close to rocking our worlds. But let’s see what’s been … END_OF_DOCUMENT_TOKEN_TO_BE_REPLACED

In the last two installments of Star Wars’ Forgotten Women we have covered Zam Wessel and Shmi Skywalker, two interesting female characters who play a crucial role in their respective Star Wars films. This post, though, will not focus on a single woman … END_OF_DOCUMENT_TOKEN_TO_BE_REPLACED

We’ve decided that it’s time for a new series of posts: Mystery Box! In a 2007 TED talk J.J. Abrams enthused about his Mystery Box, a magic box he never opened and symbolized, to him, the beauty of mystery. In these … END_OF_DOCUMENT_TOKEN_TO_BE_REPLACED

The Attack of the Clones was the first Star Wars movie I got to see in the cinema, after an extensive campaign for the chance to. Walking out of the cinema I was all about the Clones, the Battle of Geonosis … END_OF_DOCUMENT_TOKEN_TO_BE_REPLACED

Like many of the other Corridor Chat posts, this one could be considered to contain spoilers and therefore I suggest that everyone who does not want to be spoiled reads one of our other posts! Today the sixth installment of … END_OF_DOCUMENT_TOKEN_TO_BE_REPLACED

I am currently on a rewatch of the 200

8 The Clone Wars series and realized that S1E08, ‘Bombad Jedi’ is an absolutely fascinating episode! Not only funny, it gives room to some major development for two of Star Wars‘ most interesting characters: Padmé Amidala and Jar Jar Binks. ‘Bombad Jedi’ works on a lot of different levels, reintroducing the political element of the Clone Wars and showing how war leads to suffering and betrayal. The episode, directed by Jesse Yeh, starts with the fortune cookie-esque ‘Heroes are made by the times‘, but rather than focus on our accepted heroes, Anakin Skywalker or Obi-Wan Kenobi, the episode goes out of its way to show that heroism exists on different levels and can be found in everyone.

From the very start of the episode it is clear that Padmé is in control of this mission. Her unwavering loyalty to her friends has brought her into dangerous territory and yet she goes there believing in the strength of diplomacy and peace, in itself the start of a very heroic quest. In choosing Jar Jar as her companion, she also reveals her recognition of similar principles in Jar Jar. Chancellor Palpatine functions as a good point of contrast to her behaviour when he mocks Jar Jar’s “qualifications”. He not only disregards JarJar but also looks at him with contempt, unable to see the potential Jar Jar holds. Palpatine respects martial strength and Jar Jar’s own brand of strength is not something he recognizes, initially. In some ways this is similar to how he considered Padmé naive in The Phantom Menace only to have to admit by the end of the film that she is a lot stronger than he thought.

END_OF_DOCUMENT_TOKEN_TO_BE_REPLACED 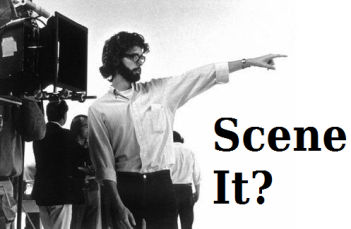 In today’s Scene It? post I’ll be looking at one of the most heart-breaking scenes in The Revenge of the Sith (2005), the third prequel film which depicts Anakin’s switch to the Dark Side of the Force. I am, of course, talking about the scene between Padme and Anakin on Mustafar, shortly before the battle between Anakin and Obi-Wan. Naturally, this post contains spoilers for The Revenge of the Sith. If you want a quick refresher on the scene, help yourself to the video below, the first half of which I will be discussing:

Some of the criticism directed towards RotS focused on the development of Padme Amidala’s character. In The Phantom Menace she is a young queen, exclusively focused on saving her planet from being taken over by the Trade Federation. In The Attack of the Clones she returns as a senator of Naboo and a key senator in trying to stop the outbreak of a war. We also see her trying to cope with her feelings for Anakin Skywalker and fighting for her life. In The Revenge of the Sith, Padme and Anakin are married, with the twins on the way, while she continues in her role as senator. As the Republic falls apart, so, it could be argued, does everything she has worked for. The difficulty with which Padme switches between her roles as  senator and wife is, I believe, on purpose.  As Anakin slowly loses himself it becomes harder for her to unite her principles with her emotions. The reason this scene is heart-breaking is because everything Padme believed in has either been corrupted or fallen apart. Below I will discuss why her choice of response to this is one which is probably singular in modern cinema and makes her stand out as one of the strongest women in sci-fi.