I remember seeing Carrie Fisher as Princess Leia on my TV screen for the first time. There she was, in her white dress, holding a gun and waiting, a symbol of light, of strength and of determination. Whether it was her chutzpah in standing up to Darth Vader or her sassing back at Tarkin, her speech to X- wing pilots in ESB or her beautiful revenge on Jabba the Hut, Princess Leia continuously inspired me as a child. Here was a princess, but a princess who didn’t mind getting dirty, who rolled up her sleeves, took the first step and did what had to be done. Whenever a celebrity dies words such as ‘inspiration’ and ‘icon’ get thrown around as if they’re meaningless, but for people like Carrie they are true. Her embodiment of Princess Leia was both inspirational and iconic. Leia could have easily turned into a wall-flower, the damsel in distress, the space babe who is allowed to get sassy every once in a while but never really does anything. Carrie filled Leia with so much life and energy that every look meant something. Leia fought, argued, loved, cared, nagged, hurt and survived. I will never forget what Carrie has done for me with her portrayal of Princess Leia and whenever anyone dares try to patronise me I know exactly what to say:

I remember reading Wishful Drinking for the first time. I had found it among my dad’s books, recognised Carrie’s name, recognised the buns and, I’ll admit, confused about the martini glass and the pills. Carrie had always been Princess Leia to me and this was before the Internet. So I started reading and I was both 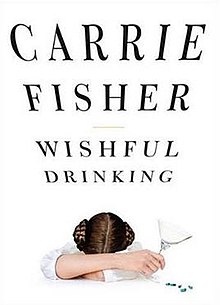 shocked and delighted. Never before had I seen anyone, let alone a woman, write so honestly, openly, hilariously, self-deprecatingly about their own life. Carrie’s razor sharp wit and insight into not only everyone else but also herself lifted all of her writing away from the ‘here is my life, isn’t it sad and fabulous’ and to a whole new level. Despite how fastly different our lives were, there was something I learnt from her honesty. Life will try and knock you down, repeatedly, aggressively, and sometimes there’s nothing you can do to prevent it. But you can learn from it. Not learn to never make mistakes again, but rather to take them in your stride, to accept everyone is flawed and makes mistakes, that laughing at yourself can be a good remedy and that in the end your life is yours. I’ll also never forget those lessons.

I also know how much Carrie Fisher has meant for other people. I have never suffered from addiction or mental health problems but her honesty and openness, her candour and her wit, her ability to laugh at and with herself and to keep going has inspired countless of people. She was one of the first to be so open about her problems and thereby changed how we address both addiction and mental illnesses. Rather than seeing it as something that holds her back and has to be hidden, Carrie opened that part of her life to everyone and showed that you can live with a bipolar disorder. That although it may be hard and that there are major downs for every up, there is a way to not just exist, but to be happy. And I also know it mattered to people that she had Jewish heritage and was not afraid to make it known. In many ways, she has made people comfortable with who they are, and it is for that also that I will be grateful.

Too most she is known mainly for playing Princess Leia but she was also a brilliant script doctor, something that made me love her even more. Script doctor is a largely thankless job, as it requires writers to dive into scripts and fix all its weakest parts so no one ever knows they were there. Although she is naturally credited for writing the screenplay for Postcards from the Edge, which was based on her own semi-autobiographical novel of the same name, she also doctored the scripts for Sister Act, The Wedding Singer, Lethal Weapon 3 and children’s classic Hook. There is even a strong rumour she helped out on the scripts for the Prequels, which makes my heart flutter with happiness.

My anticipation for Episode VII is not combined with a sense of dread because I know it will be painful to see Carrie on screen again and know it will be the last time. But it will also be a reminder to never let anyone tell me what to do, what to be, what to wear and what to say. That I can Tweet almost-nonsensical things that yet feel so true and that if I just do, confidence will follow. I want to end this post with the obituary she wrote for herself in Wishful Drinking:

‘I drowned in moonlight, strangled by my own bra.’

May the Force always be with you, Carrie. And thank you, for everything.

One thought on “Thank you, Carrie!”