Star Wars: Rebels has well and truly arrived back on our screens with its stunning second (technically third) episode of Season 2. The first episode, ‘The Siege of Lothal’, aired in June of this year and really upped the anticipation for this new Season. Let’s have a quick recap of that episode before we jump straight into ‘The Lost Commanders’. This whole review and post will contain SPOILERS so be warned!

In ‘Siege of Lothal’ we saw our Rebel crew at the side of the Rebellion, planning its next moves and being forced to deal with the fall-out from the end of Season 1. There were some tense moments as the crew had to adapt to their new responsibilities and position. Not only was Darth Vader (James Earl Jones) back, and gloriously so, to cause trouble, but Fulcrum also made an appearance, revealing herself to indeed be Ahsoka Tano (Ashley Eckstein) as many fans had hoped. The high point of the episode was truly when Ahsoka reached out into the Force and got a hint at who this mysterious Darth Vader might be. This episode really left us asking a lot of questions and it was now up to ‘The Lost Commanders’ to at least address some of them. So let’s get into it!

The episode gets straight into the story, showing us the whole crew of Hera (Vanessa Marshall), Kanan (Freddie Prinze Jr.), Zeb (Steve Blum), Sabine (Tiya Sircar) and Ezra (Taylor Gray) plus Ahsoka on the Rebel fleet discussing where to hide out following the happenings of the last episode.Without any further ado Ahsoka mentions an old friend who might be helpful and sends the Ghost crew on their way, splitting the narrative of the half-hour long episode in two. It was a wise move on the writers’ behalf to let the original Rebels characters have their own story rather than use them as simply a vehicle for continuing The Clone Wars stories. 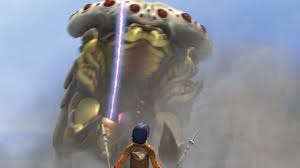 On Seelos the Ghost crew zones in on a bunch of ‘old geezers’, as Zeb snorts. These old geezers are in fact Captain Rex, Wolffe and Gregor (all voiced by Dee Bradley-Baker) and it was an utter joy to have these Clones back on our screens. Their presence not only allows for continuing strong ties to The Clone Wars but also allows Rebels to draw bridges to the Prequels, and especially to the happenings in The Revenge of the Sith. It was fascinating to see the two different sides of Order 66 come together and to see the continuing consequences this event has in the Star Wars canon. The PTSD we have seen Kanan suffer with has its own form in Rex, Wolffe and Gregor who feel ‘betrayed’ themselves. They clearly have their own issues as well and once To see the rifts that this event is causing within the characters’ lives and relationships is really interesting but also heart-breaking. The ‘fishing scene’ was a great moment of seeing the whole group coming together, working as a team despite their differences and disagreements, despite perhaps not being the most plot-relevant of scenes. It also made for some humour which was sorely needed at this point and the music for it was brilliant. It was especially great to see Sabine so easily integrated into the Clone group.

The new, older Ahsoka seems to have a beautifully dark edge to her. On the one hand she is now a mentor-figure to the Ghost crew, reminding one of Obi-Wan Kenobi, but on the other hand her business with Darth Vader already seems to bring out quite an angry side of her. Ahsoka is very much a character that has grown up in front of the audience and as such the audience is rather invested in her. To see her confront Vader is one thing fans are waiting for and it’s something that definitely seems to be set up by this episode. As she says, ‘There are questions, questions that need answering.’

As others have noticed as well that there was a strong Howl’s Moving Castle reference to this episode with the modified Republic Tank. It was a beautiful little touch, showing the varied influences on the animators, whose style has really developed since the last Season. The colours of the episode are incredibly vibrant and the animation is sharp and clear without being harsh. You can see the freckles on Rex’ cheek, that’s how detailed this animation has become. The episode was suffused with little hints to the rest of the Star Wars canon, with the Probe Droid being a nice flash-forward, so to say, to A New Hope and Rex’s reference to the Siege of Mandalore being the cause for many more questions.

Overall ‘The Lost Commanders’ is a nice and slow introduction back into the the Rebels story. The episode has some funny and touching moments, preferring to spend time on the tension around Order 66 rather than jumping into the introductions of the new Inquisitors, for example. Although at times slow, then, it’s never boring and gives us time to start anticipating the coming developments. This episode definitely doesn’t even give us all the answers yet but it’s actually a good sign that the writers aren’t rushing to resolve old story lines but are planning to give everything it’s time to develop.

Did you enjoy this new episode? And did the return of the Clones make you equally nostalgic for the stories of the Prequel-era?