In our new series The Star Wars Anthology Movie You’d Like To See readers of our blog get a chance to present a ‘mini-script’ of an Anthology movie they would like to see. Please send your contributions to us in such a way that they can fit the format of this series. We will be presenting our own (sometimes silly) ideas and are looking forward to reading yours! 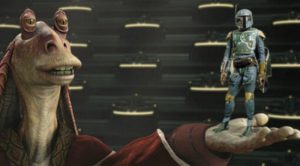 The first instalment discusses Rogue47’s action comedy involving Boba Fett, Han Solo and Jar Jar Binks. But a comedy is nothing if there are not also a few touching moments, right?

This film is proposed as a mix of an action-comedy and a Buddy-Cop movie. It teams up Jar Jar Binks, a young but seasoned Boba Fett and a young Han Solo in a quest to retrieve a lost Jappor-snippet.

A young Han Solo, a young Boba Fett and Jar Jar Binks are the main characters. There is also room for some more scum and villainy, shady spaceport-residents as well as sternly looking but incompetent Imperials. Some of the early Storm Troopers, freshly trained by Clone-veterans, can actually shoot straight in this film.

This story plays out 5 years before A New Hope. Boba is clearly adult, but not yet as old as in the Original Trilogy. Han Solo is still significantly younger than in the OT and Jar Jar is older that in The Revenge of the Sith but not much the wiser and still as clumsy.

The movie starts with Jar Jar, accompanied by Padme’s youngest sister, who is collecting the Jappor-snippet that Anakin Skywalker carved for Padme Amidala from Padme’s tomb. We first see Jar Jar at her tomb where he explains (addressing her as if she can hear him) that he has come to pick that snippet up intended for her daughter. Explaining Leia cannot come as it would be to risky for the young girl, also explaining Bail Organa asked him to do so in order that she has something tangible from her mother. Bail wants to give that to her when she turns 21. Jar Jar goes through the motions of
opening the tomb in a very respectful manner and takes the snippet. It is a touching scene and with the snippet he leaves.

On his way back to Theed’s spaceport however Jar Jar is mugged and the snippet is lost to a petty thief. Jar Jar contacts Bail who is very upset and asks Jar Jar to stay on the tail of the thief but not to do anything and wait till the help he will send has
arrived. Bail contacts Boba Fett to quickly sort out this mess. Boba is hesitant and wonders why this is not something for local security. Bail can’t really explain but his willingness to pay convinces the young Fett who thinks this may be an easy well-paid job. Fett travels from Coruscant to Naboo to meet up with Jar Jar.

The Thief of the snippet turns out to be a member of a local gang. The snippet passes from one to the other in a betting game in a local cantina and gets mixed together with many other items of questionable origin. Jar Jar (in disguise) attempts to keep track of who owns what but get increasingly confused. Just before Fett arrives the possible owners of the snippet all leave Naboo for various planets and other ‘deals’.

When Fett meets Jar Jar they go through the list of the names of the possible owners and with each and everyone of them Fett has something left to settle anyway. 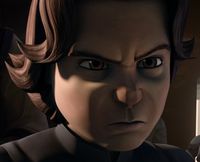 Except with one of the possible owners: the unknown Han Solo. Han Solo makes a deal with one of the other possible owners regarding transporting some sensitive cargo of hyperdrive & disruptor
parts off planet without imperial entanglements. Han sees this as an excellent opportunity to further his smuggler’s career. He loads the cargo and leaves Naboo at the same time as the actual owner.

Both ships have to pass an imperial star destroyer, however Han’s ship gets tracked and the imperials want to halt him. He now realizes he is a decoy only hired to draw attention and draw it away from the actual transport. He opens the cargo and finds a load of illegal spice, better to be caught with than disruptor-parts but still enough to lead to several years of imprisonment … he is not happy. Han gets caught in a tractor beam and is arrested.

Boba and Jar Jar hear about Han’s capture and detention aboard the star destroyer patrolling in orbit. 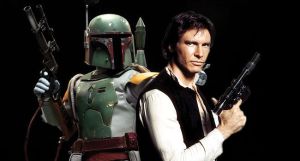 They know they will only have a few hours to attempt to get Han’s cargo off that ship. Boba doesn’t like this at all and wants to tell Bail to sort it
himself. But Jar Jar’s loyalty to Bail makes the two get into a conflict and eventually a fight. Though Jar Jar stands no chance
physically he cleverly entangles Boba in the situation such that doing the star destroyer heist seems to be the easiest way out of this mess.

Boba does not like being tied to clumsy Jar Jar, but Jar Jar’s clumsiness creates several effective distraction of the imperials. When Boba has his hands on Han’s cargo, he wants to leave. But Jar Jar also wants to get Han out. Boba dislikes that an contemplates leaving Jar Jar behind as well. Jar Jar heads off to the prison-cell complex. Only then does Boba find out Jar Jar has taken the ‘keys’ to the Slave II with him. Deeply annoyed he catches up with Jar Jar and they free Han.

They evidently can’t return to Naboo with the imperials in their necks so they go for a nearby system: Tatooine … at least there the Imperials will not be looking for them. They find out Han does not have the snippet but he does have ID of the guy who conned him and who could also have the snippet. That man was making a disruptor delivery to Jabba but tricked him to delivering poor quality ware. Jabba puts a price on the retrieval of the guy and well … Boba and han don’t mind collecting that as well. But Boba is not entirely happy getting another loser like Han in his team (as he views it).

Jar Jar, Han and Boba go through a series of chases, heists and thefts and finally they will find the snippet when confronting
the last candidate who is also the one that conned Han and owes him dearly. That last (succesful) heist involves freezing one of the three into carbonite so that he can enter a droid-guarded bunker where scanning for life forms is standard. One of them in carbonite is hidden in cargo with a timer set to unfreeze him inside. When they discuss who is supposed to eb frozen in Boba and Han can ‘convince’ Jar Jar that he is the most likely candidate for this. And Jar Jar does so finally.

The heist is a success and they collect the rewards from Jabba and then from Bail. 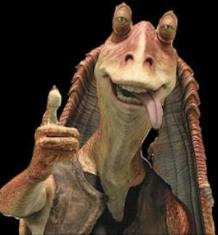 At the end Jar Jar returns to Padme’s tomb and tells her that her daughter will get the snippet on her 21st birthday while we see Bail hold it and then deposit it in a safe on Alderaan. From that safe we zoom out till we are far above the surface of Alderaan and we see the planet the way Tarkin saw it in Episode IV just before its destruction.

On their journeys Han learns from Boba and starts to have a little respect for the man’s ‘healthy selfishness’and skill with a blaster. Similarly Boba develops a kind of respect for han, especially his increasing piloting skills. Both initially ridicule Jar Jar but start to appreciate his comic talent for distractions as well as his loyalty. They are finally actually impressed with Jar Jar going into carbonite and they might even say something nice about him … after he is frozen.

Nevertheless at the end they will hope never to see each other again. 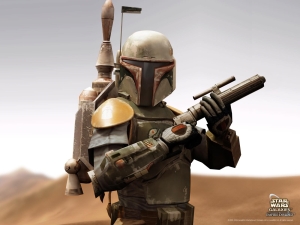 3 thoughts on “The Star Wars Anthology Movie You’d Like To See I: Fett-Solo-Binks”