In Today’s Scene It? I want to take a closer look at one of Star Wars’ most dramatic and yet most intimate scenes. I think this scene can hold its ground when compared to Anakin’s farewell to his mother in The Phantom Menace, Shmi’s death in Attack of the Clones, the final moments of Obi Wan and Anakin’s encounter in Revenge of the Sith, the death of Yoda in Return of the Jedi or Han and Leia’s Í love you, I know’ scene from Empire Strikes Back. Just like those scenes Ahsoka’s departure in the final moments of season 5 of The Clone Wars is a pivotal moment in the Saga of which we have not yet fully seen the consequences.

Ahsoka was falsely accused by the Jedi Council of involvement in a terrorist attack on the Jedi Temple and the murder of another suspect, and expelled from the Order, but cleared by Anakin who was able to find the actual perpetrator and extract a public confession. 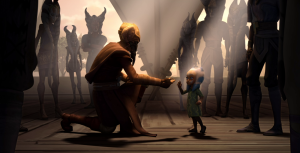 The Jedi Council gathers to ask Ahsoka to return to the Jedi Order and Anakin immediately makes their request very personal. It is evident he is less interested in the half-hearted or outright offensive apologies by council members than in restoring his personal ties with Ahsoka. For Anakin this is about attachment, not about trial and error. Interestingly the only Council member following Anakin in this is Plo Koon, the Jedi who discovered Ahsoka when she was still small. He calls her affectionally “Lil’ Soka” whereas as Anakin does not use his more affectionate “Snips”. For Anakin, even though he yearns for the restoration of his connection to Ahsoka, recognizes the ordeal she has gone through as a coming of age’ experience. She was abandoned by the ones she trusted and relied upon, by all except Anakin. None raised their voices when she was illegitimately expelled, not Obi Wan, not Yoda and neither Plo Koon, except Anakin. Also in this scene of apologies Obi Wan says not a word.

Plo apologizes and criticizes the Council’s lack of vision but does in the end, affectionately or not, treat her like a Padawan learner. The subsequent Master’s twist the ‘coming of Age moment’ and spin it into a test engineered by The Force, Ki Adi Mundi is already bad but Mace Windu tops it all. With these two there is no apology for their lack of faith in Ahsoka, but there is an ultra cynical justification of their error as an intentional act of The Force. Ahsoka’s facial expression reflect this. This girl is ‘miles away’, not just from the “lil’ Soka” Plo refers to, but also from the Ahsoka we first saw coming out of that Republic Shuttle in 2008.

Yoda adds little, like Obi Wan he stays remarkably mute. It is clear both Obi Wan and Yoda are uncomfortable with what has transpired. In The Clone Wars this is the moment where a rift opens up within the Order, Windu and Adi Mundi are on one side of that rift, Yoda and Obi Wan are on the other.

But in his characteristic way Anakin makes the whole thing personal again. And when he addresses Ahsoka he treats her as an equal. That he offers her her Padawan braid is not, in my view, a sign that he sees her as a Padawan he would like to retain. This braid was ripped from Ahsoka’s head during the expulsion from the Order, that he picked it up, safe-guarded it and now offers it back is a gesture of deep affection. She struggles, not with her decision to leave the Order but with a response to Anakin’s emotional appeal. 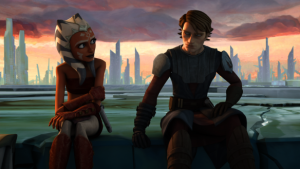 When she closes his hand around her braid she clearly indicates that her departure from The Order is not a rejection of Anakin’s friendship. It is a subtle and soft reminder of a conversation these two had just a few days earlier when Ahsoka was on the run and she asked Anakin for his trust and confidence in her. He affirmed that then, just before she jumped into the unknown. She affirms their relationship now in the manner of her rejection of the offering of The Order.

When Ahsoka leaves, none try to follow her except of course Anakin. Anakin’s departure does provoke a mild reaction among the other Master’s. We see Yoda’s look and Obi Wan’s impulse to follow Anakin. Obi Wan cares about Anakin similarly to how Anakin cares about Ahsoka. In many ways Ahsoka has become Anakin’s little sister just as Anakin has become Obi Wan’s little brother. The deep tragedy of the Jedi in these last days of the Republic is that none of these attachments can be shown or put in words but they must be hidden and restrained. Only much later, and in many ways too late, will Yoda find out just how wrong he has assessed this whole situation.

What follows after Anakin has caught up with Ahsoka must be among the most heart-breaking dialogues in all of Star Wars, possibly in all of animation series. The voice acting is exquisite, the soundtrack is overwhelmingly atmospheric. It starts of with a crucial exchange! When Anakin asks why she is ‘doing this’ she replies with ‘the council didn’t trust me, how can I trust myself’. From the behind-the-scenes videos on this episode it is clear that this line comes directly from George Lucas. He explicitly wanted her to say this and I can already hear the moaners think that ‘this is not something anyone would ever say in real life’. Admittedly at first it does seem rather odd, but I think it is a stroke of genius.

She does not give the petulant adolescent reply along the lines of ‘if they don’t trust me, how can I trust them’. As much as this might be the line many viewers would have expected, had she said that it would have utterly negated the entire character arc she has gone through at the end of Season 5. By saying what was put in her mouth by Lucas however, she draws that arc to a completion. She accepts the lack of trust of the Order as a given, as a fact. The question however that bugs her now is ‘how did we get this far?‘ Ahsoka asks herself the question The Order should have been asking itself and Anakin asks himself.

Again Anakin attempts to make it personal, because that is the confirmation he is hoping for. It is the confirmation he gets but he is not able yet to see it. He talks to her in past tense … “I believed in you” … she replies in present tense “I know you believe in me” … I love this dialogue because it signals so clearly that Ahsoka knows Anakin at a deeper level than he is aware of. What between Han and Leia becomes the ‘I love you, I know‘ that indicates an intimacy beyond the spoken confirmation, is between Ahsoka and Anakin ‘I believed in you … I know you believe in me’. Still Anakin does not see or hear. He is blinded and deafened by his sense of loss. Ahsoka walking away is ripping open all the wounds that he is carrying within him from his days as a slave and the loss of his mother.

Then comes that wonderful closing moment. Just as they turn their back on another. At last Anakin connects emotionally with Ahsoka’s state of mind, recognizes the pain that they now share albeit it in different ways. Anakin can never be fully part of The Order as his heart is in the outside world. Deep down inside he knows they do not trust him, but he also knows that indeed he cannot be trusted in the way the Order expects of him. And when he says so reluctantly and ambiguously Ahsoka merely replies with an ‘I know…’. She knows … she knows about Padme, she knows about Anakin’s doubts, she knows about the degree to which he is a ‘misfitt’ in a deeply dysfunctional order, she might even know or have some inkling of his transgression against the Sand People and his potential for hatred.

The moment Ahsoka leaves is exactly the moment in which she gives Anakin the strongest and deepest confirmation of the bond they share. That is why, maybe just for a moment, he is capable of letting her go. He too, knows. The next time we see Ahsoka Tano will be about 15 years later, in Rebels. She has not returned to the Jedi, her lightsabers white she evidently still wields The Force. Going down a path where Anakin could not follow her has thrusted her into the heart of the Rebel Alliance. Going down a path she would not have been able to follow has thrusted Anakin into the heart of the Sith Empire of Sidious. Soon the two shall meet again and that meeting will carry with it the full weight and incendiary emotion of their last Good Bye on the steps of the Coruscant’ Jedi Temple.

4 thoughts on “Scene It? Ahsoka’s Departure”