These two lines are some of the most iconic from the original Star Wars trilogy, first heard in The Empire Strikes Back and again in The Return of the Jedi. Yet this second time is no way near as often discussed as the first time. So let’s discuss both for once and see how they compare and contrast!

The Empire Strikes Back

Although Han and Leia are still very much in the bickering-phase of their relationship in A New Hope, they have moved on to lingering glances by the beginning of The Empire Strikes Back, although the bickering never quite stops. The relationship between Han and Leia isn’t the same as Anakin and Padme’s in the Prequels, which is consciously based on the courtly style of romance with its traditional language and dramatics. Han and Leia’s relationship, from the beginning, is rougher because of their circumstances. There is no time for picnics when you’re running from the Imperial fleet, although it has to be argued that halfway through The Attack of the Clones the relationship between Anakin and Padme becomes a lot less fanciful. As such, the relationship between Han and Leia develops very differently which leads to the truly tragic love declaration in The Empire Strikes Back.

The reason that the exchange between Han and Leia is heart-breaking is not just because Han is about to get carbon-frozen and no one knows how they’ll get him back. Let’s think back to what happened to the other people that Leia loved: her family. In  A New Hope Leia is made to witness her planet and her family being blown up by the Death Star. Still imprisoned, there is hardly time for her to deal with this shock before she takes control of her own rescue and then almost gets blown up by the Death Star herself. There was no chance for her to say a last farewell to her family and that damages a person. Three years pass between A New Hope and The Empire Strikes Back and it can be assumed that within those years Leia would learn to deal with her loss, but naturally this would also lead to emotional walls being raised. She is at war and people die around her daily.I think many people underestimate how guarded and calculating Leia is, qualities she definitely got from her father. There is a lot of anger and suspicion in her. It is no surprise that she is the one in ESB who is railing against the idea of being attracted to Han, whereas he seems quite comfortable commenting on the romantic tension between them.

By the time they arrive in Cloud City they have kissed and settled into an almost casual intimacy where their feelings are acknowledged but not actively acted upon. When it all goes to hell, in many ways Leia’s worst fears come alive. Again, she may lose a person she loves without being able to say goodbye. Her ‘I love you.’ isn’t calm or considered, it’s blurted out almost inadvertently. Leia needs to tell Han, not necessarily for him but for herself. Han’s response was, famously, not scripted. In his book The Making of Star Wars: The Empire Strikes Back J.W. Rinzler recounts a conversation between Kershner and Harrison Ford in which they discussed what Han’s reply should be, instead of Kaplan’s scripted ‘Just remember that, ’cause I’ll be back’. Despite also true to Han’s cockiness, it doesn’t carry the same weight. Ford came up with ‘I know’, arguing it fits with Han’s character. Although Lucas feared it would make the scene comical, the test audiences loved it and it, veritably, made the scene.

However, there is more behind this ‘I know.’ than just being fitting for Han. Although Kershner argued that this scene was about Han, it is really about the culmination of Han and Leia together. Taking into consideration Leia’s past, as described above, her ‘I love you’ is for both of them. Han’s response seems to acknowledge that Leia knows how he feels and that she understands the gravity of the situation. Han’s bravado is as much a facade as anything and in this moment he can’t let it crack. Leia recognized that Han needed the same kind of confirmation of their feelings at this point as she did and therefore there is also no visible annoyance at his response on her side. Han’s response is clearer when the mirror scene in The Return of the Jedi is discussed. 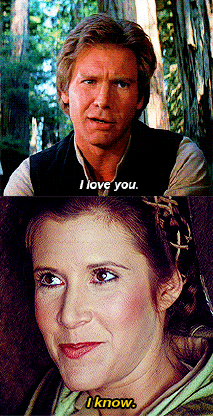 The Return of the Jedi

At the beginning of The Return of the Jedi Leia saves Han, before getting captured herself. Once they, plus Luke, Lando and Chewie, manage to escape there is, again, no time for heart-felt conversations about their emotions, especially since neither Han nor Leia seem the type for that. They continue in their ‘flirting through banter’ way yet are clearly more affectionate with each other. On Endor they get separated and reunited before they set out on their final mission. When they get cornered, with Leia wounded, there seems to be no way out. With his back to two Storm Troopers, Han is worried and ready to surrender when Leia draws his attention to her “concealed” gun. His response to her ingenuity is a relieved and almost proud ‘I love you’. Leia’s responding ‘I know’ is both a cheeky reminder to his own response and her acknowledgement of where his declaration comes from.

Whereas Leia has lost all those she loved, Han Solo hasn’t  ever had a lot of people in his life that he could love and trust. Orphaned early in life, Han was treated horribly by his pirate boss and unlucky in love to top it all off. It wouldn’t be an overstatement to argue Han probably has severe issues. Aside from Chewie, the only friend we see him having in Star Wars is Lando Calrissian whom he doesn’t even truly trust. It takes until The Empire Strikes Back for Han to really trust Luke and he doesn’t become a true part of the Rebel Alliance until he leads the mission to Endor. For Han, love and trust go hand in hand. In this moment in RotJ, Leia once again shows she can save Han’s life, and the day, and is worthy of his trust the way that he is of hers. By this point it was almost unnecessary of him to tell her he loves her and her ‘I know’ is equally about him the way that his ‘I know.’ in EBS was about her.

The moment in RotJ is a positive mirror image of the scene in EBS, with Han and Leia smiling rather than looking scared and traumatised. Also interesting is that they are in a natural setting, rather than in a manufactured one as in EBS. The whole scene is lighter, in tone, look and feel. At this point there has been a natural progression in their relationship where both can declare their love and have that accepted. Because that is what their ‘I know’s are about: acceptance. In both scenes, Han and Leia respectively don’t only acknowledge the others love but also show their understanding and acceptance of what that means to the other. Leia risks her life to get Han back and Han, who starts of as a selfish cad, is, by the end of RotJ, willing to let Leia go thinking she’d be happier with Luke. For both of them love doesn’t come easy, but once it does come it is passionately and strong.

Did you enjoy this post? Check out our discussions of other Star Wars scenes in our Scene It? series.