The WW2 narrative and Star Wars

From the very first instalment of Star Wars in A New Hope there has always been a clear link between its narrative and the history of Twentieth Century Europe. On the one hand there was Lucas’ deliberate use of Leni Riefenstahl‘s cinematography, as exemplified in her Nazi-propaganda film ‘Triumpf des Willens’, in depicting the Imperial menace. The shots of Imperial Shuttles landing in areas with large numbers of perfectly aligned storm troopers conveyed the sense of total control that the Empire sought to exert on its subjects. The mere facts that Imperial Officers were dressed pretty much like Nazi-officers and that Imperial soldiers were called ‘storm troopers’, a word that in the Anglo-Saxon world is almost exclusively connected with the Third Reich, already provided enough reason to consider the connections. But what stood out for me was that my parents, WW2 survivors, immediately recognised the Empire as a reference to the forces of oppression that had created such havoc in their lives and throughout Europe. The 70th anniversary of VE-Day seems an excellent moment to reflect upon this.

Starwars as a Western?

Some argue that at the root of Starwars is the narrative of a ‘Western’. But in my opinion that only holds for the ‘Han Solo subplot’ of A New Hope including the affiliation to Boba Fett. Only for a brief few moments on Tatooine is there a sense of ‘frontier’ in which the Sand People play a role analogous to the role played by native-American tribes in many a Western movie. And Han Solo’s only ‘gunslinger moment’ in the Mos Eisley cantina is even less of a Western-style moment now in the Special Editions that are canon.

Star Wars’ overall narrative however is a deeply ‘European’ story of Republic, Empire and Rebellion. I don’t mean to say it is not an American story however! But when you look in US history for parallels you find them in the War of Independence, possibly in elements of the Civil War, but most definitely not in the conquest of the West that is the underlying theme of so many ‘frontier-type’ Western movies. Many things distinguish the two types of narratives.

In Western’s Law and Order are usually depicted by characters such as a Marshall and his deputies and sheriff’s. If these law-enforcer are actually on the ‘bad’ side of the narrative then they usually surround themselves with a few thugs and crooks who generally stay in the shades of the saloon until needed. If and when the military enter in a typical Western then as the cavalry that saves the day. The only possible exceptions are usually the appearance of ‘Confederate troops’ in depictions of the Civil War. But these films are rarely Western’s and if they are then the Confederates are just a bunch of drunkards and bigoted fools.

You will not find (m)any Western’s with a significant blend of Militarism. Yet Star Wars is very explicit about the glorification of military might by the Empire and its ruthless use of that power. The ‘evil’ side in Original Trilogy is not some lawless or corrupt bunch of gangsters or crooks disguising themselves as keepers of the peace. Rather The

Empire is an oiled and efficient machine to subjugate any opposition, whether politically, militarily or by means of terror. A New Hope makes this clear from the very first moment onwards. The very first shot, the famous Star Destroyer shot, hails of the grandeur of the Imperial War machine, deliberately visualized as this enormous vessel hunting down the small rebel cruiser. The boarding scene is similarly stark in its message as well as the subsequent interrogation of Rebel soldiers by Vader. The Empire is a fully militarised power and militarism flows through its veins.

Militarism is not uncommon in imperial powers. The Roman Empire had large standing armies recruited from across its diverse population and so did the British Empire. Both equally had a distinct taste for militarism that is still weakly echoing through the UK occasionally and that was definitely also adopted by the US. But the Star Wars depiction of The Empire contains another crucial element. The Empire is at War with a Rebellion, which by itself is something Empires tend to do all the time. But the war we get to see in A New Hope is not just any kind of war. The first Death Star signifies above all the determination of The Empire to not just defeat the Rebels militarily, but to utterly annihilate everything and everyone that either sided with them, or that just happened to be in the wrong place at the wrong time. This is not ‘Counter-Insurgency 1001’, this is unmitigated War of Extermination. The purpose of the Death Star was not merely to instil fear in the hearts of the Galactic citizens, but to physically annihilate any Rebel cell together with all logistics, support and context in the crudest way possible.

As a result of this tactic, which the Empire had pursued already prior to the Death Star becoming operational, the Rebel Alliance could not afford to hold on to bases for a longer time. Always on the run, always evacuating one basis to converge again elsewhere onto another, keeping the Rebel Fleet far out of the Galactic Plane. The closing shots of the Empire Strikes Back shows exactly how far the Rebel Fleet needs to retreat out of the disc of the galaxy in order to have some measure of safety.

I know of no typical Western movies that have an antagonist that behaves in that manner. In World War II movies these are of course legion. The fact that The Empire wages a War of Extermination on its enemies points at something even darker: the genocidal nature of The Empire.

How many Western’s do you know that depict genocide? Of course we all know what has been the fate of the tribes of the Native American peoples in the nineteenth century. Sure many Western’s depict elements from that conflict with sometimes more compassion and sometimes less and often times with vilification of the Native Americans. The only ‘Western’ I know of that really depicts this genocidal element is John Ford’s ‘Cheyenne Autumn’. Possibly even the best 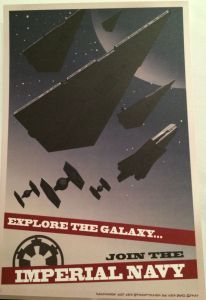 movie made about it. The Original Trilogy does not thematically pick up the mindset or context that leads to genocide, but it surely shows it. When the Death Star destroys Alderaan as a mere ‘example’ it becomes totally clear that this Empire does not recoil from genocide to make its point. But also in the Battle of Yavin there is not a second’s worth of consideration for the life-forms on Yavin IV that would be annihilated together with the Rebel base.

Since the first half of the first season of Star Wars: Rebels we know that genocide was in the standard tool-kit of The Empire when they dealt with the insurgent Lasaat on Lasan. It is not hard to conceive that the Lasaat-genocide  was not the only such event in the history of the Galactic Empire and the Legends recall at least one more example. The Galactic Empire of the Original Trilogy was a deeply specie-ist and militaristic entity that sought to rule over its citizens with absolute control. That is not the stuff of a Western movie.

In the Original Trilogy we encounter a foe that is nothing like the bad guys of the traditional Western. A New Hope contains some Western-elements, but it also contains dog-fight World War I and II elements as well as plenty of other influences. However the prime villains are evidently rooted in the experience of recent 20th century’s history. Of course the story also resonates with crimes perpetrated by other imperial powers in the World History. Yet the Empire in Star Wars goes about its crimes in a deeply technological manner driven by an elitist religious inspiration shared by the inner-core of the brutal regime. The parallels to the Third Reich are very evident and yet run deep.

The Original Trilogy simply presents us this as a given. But narratively that is incredibly difficult as it raises the question how in such an evil system anything good could have endured? And when we learn about Luke’s origin from Darth Vader this question becomes highly personal. The Original Trilogy does not even begin to answer that question, it ask of us that we suspend our disbelief and are willing to accept Palpatine’s death at Vader’s hand as evidence that there was still some good, not just in Anakin but in the Galaxy as a whole.

I think Lucas was acutely aware that we needed not just a narrative about how Anakin Skywalker became what we see in the Original Trilogy, but also the story of how such a vicious Empire could emerge from something not altogether rotten. That is a hard story to tell correctly …  to people who like their ‘used universe look’ so much that they cannot see that this ‘used look’ is exactly the dust and decay spawned by a racist, stagnant and oppressive Empire that sacrifices the creativity of the Naboo, the nature-connectedness of the Ewoks and the innocence of the Gungans as easily as it seeks to control by genocide. But I will leave that reflection for another time.